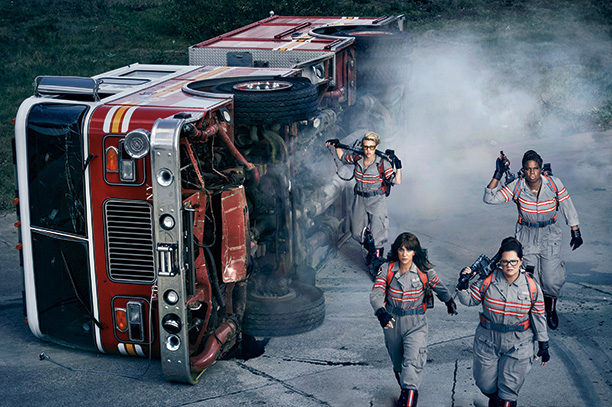 Yates, Holtzmann, Tolan and Gilbert – those are your new Venkman, Stanz, Zeddemore and Spengler as the Ghostbusters return!

Inane controversy aside (and trust me – no-one’s childhood is in any danger here…) Paul Feig’s new instalment in the Ghostbusters saga looks fantastic, and there’s no doubting the talent in front of the camera. Melissa McCarthy, Kristen Wiig, Kate McKinnon and Leslie Jones are our new team of spookstoppers and our first real look at what is essentially Ghostbusters 3 is here.

Thirty-two years after the original team of Bill Murray, Dan Aykroyd, Ernie Hudson and the late, much-missed, Harold Ramis took to the streets of New York The Big Apple is under attack again.

Here’s a concise summation of the basic plot,

With paranormal activity on the rise, a Columbia University academic, her ghost-chasing friend, the friend’s business partner, and an MTA employee join forces to bust ghosts and save New York.

Yes! say we. Very excited for this one. Chris Hemsworth pops up in a role which may well be part of a future spin-off, as the 2016 Ghostbusters film may well set up a shared universe. Which is not unexpected, but it does mean that Sony have a lot riding on this one…

Anyway, enough of my yakking, TRAILER!

And in case you were wondering how the first film was introduced to the public, take a look below…