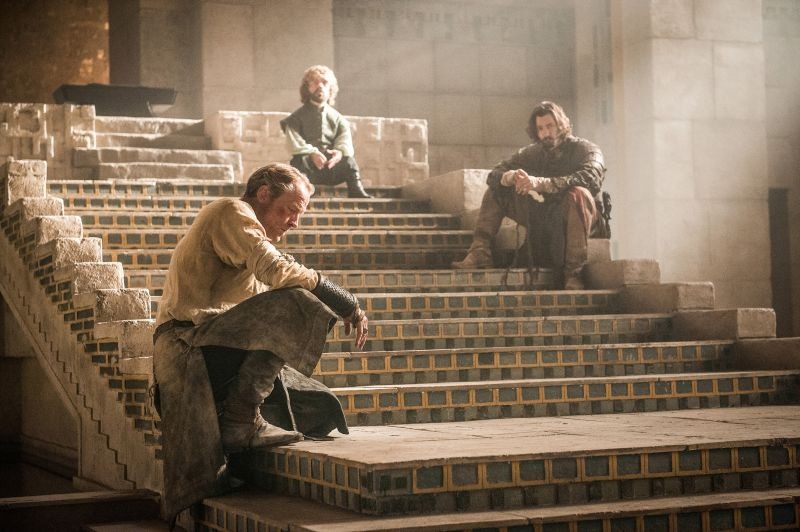 The time has come and boy does it feel too soon, but alas. Showrunners David Benioff and D.B. Weiss have been brewing Game of Thrones Season 5 like a scolding broth; one that alters in flavour, colour and seasoning with every stir.

Last week’s hour in Westeros climaxed in a dizzying array of steel-wielding frenzy whilst we exit tonight’s episode and indeed season in chillingly cold and quiet circumstances. Sometimes the show might be easier for audiences if we just rooted for the White Walkers…

Our final flurry in this fifth series draws its name from Cersei’s plea with the High Sparrow when she finally agrees to ‘confess’. Kneeling before the warm-faced but supremely powerful elderly man, she admits her sin in which she engaged in adulterous encounters with now Brother Lancel Lannister. She does not however confess to her incestuous relationship with Jaime, nor does she offer truthfulness about her inbred, bastardised children.

The High Sparrow conditionally accepts the Queen Mother’s word and tells her that she will be able to return to The Red Keep to be reunited with her beloved son, King Tommen. She thanks him tenderly as she lay before him like a wounded animal quivering with helplessness. He tells her not to thank him, but to offer such praise to the ‘Mother’ who is most merciful.

Cersei promises to pray and thank her holiness each day and night, but this being King’s Landing – and indeed Westeros – forgiveness is never that simple. She will stand trial for her crimes, including those she fatefully denies, and before being reunited with her “sweet boy”, she must complete her atonement…

Following on from the conditions of the High Sparrow, Cersei is stripped naked and shoved, pulled and scrubbed as a trio of Sparrow women wash her. She is then slumped onto a creaky wooden stool where her hair is brutally severed with a razor; slicing her scalp and ear in the rugged process. Prepped and ready for her atoning, she is taken to the peak of the city stairs where the High Sparrow addresses the cavalcade of followers, onlookers and locals. He explains the conditions of the Queen Mother’s sins and her punishment. She must march to The Red Keep through the waves of riled public in the eye that the Lord made her.

The Nuns ripped off her draped rags and reveal a fragile, entirely nude woman to the world. Following her with a bell which rings clinically as she repeats the phrase “shame”, Cersei makes her way through the streets where she is verbally, psychically, psychologically and emotionally attacked throughout the prolonged venture. Onlookers scream hideous insults at her, naming her a “whore” and “bitch” (that’s the nicer stuff…) before many start throwing rotten food and excrement at her.

Some flash their privates as they sexually taunt the shattered Lannister, whilst others spit in her face and make attempts to punch or kick. After a horrendously elongated walk, a bloodied, bruised, belittled and broken Cersei arrives at the doors of her sanctuary and it is here where her surprisingly strong facade completely shatters.

There have been some tough moments through Season 5 and indeed the show in general, but this sequence was unquestionably amongst the hardest to swallow. Watching Cersei so achingly vulnerable, isolated and victimised made for supremely profound and compelling viewing. Considering all the harm and hatred the Lannister lady has caused, it is impossible not to feel sorry for her in this state.

With Stannis firmly en route to Winterfell (he makes it in this finale with devastating results) and the Boltons in full focus to protect their overthrown kingdom, it really is Sansa’s last chance at a bid for freedom. Cloaked under a wide hood and gown, she darts through the populous castle grounds armed only with a candle. Brienne of Tarth and Podrick have been awaiting the light signal in Winterfell’s highest tower but their watch is distracted by the surging Baratheon army; a real shame for the entrapped Stark girl who gets the candle lit just a fraction too late.

Realising she has missed her opportunity, she scurries back to her quarters but is inflitrated by Ramsay’s demented concubine Myranda and hapless Theon / “Reek” who clearly wants everything to run as smoothly and calmly as possible. Any encounter with the now-Bolton is something he desperately wishes to avoid. Threatening Sansa with a bow and arrow, she whittles off harsh realities about her situation by Ramsay’s side but the Stark is no fool and understands what must be done. Myranda aims and fires her arrow but Theon shoves her aside forcing her spear-headed dart to miss and consequently knocking her over the edge of the railing.

Falling to her sudden and shocking death, Theon grabs Sansa and seizes their final chance to flee. They dash up the stairs, mount over Winterfell’s breathlessly high walls, lace fingers, take a breath and jump into nothingness.

Do they make the leap of faith and survive, or do the duo end up just like Myranda? We won’t know until next season, but regardless of the outcome, one thing is for sure: “Reek” is no more. The Greyjoy has returned.

Mother’s Mercy erupts with fantastic sequences – many extremely profound and poignant such as the heartbreaking set-up in Castle Black which sees Lord Commander Jon Snow’s ‘Brothers’ offer their allegiances to the Watch as they take turns plunging their daggers into his chest. Is Snow dead? Many fan theories are contemplating not considering voodoo enchantress Melisandre is around and she has also just lost her Would be King Stannis. Regardless of the overall outcome for Ned Stark’s bastard, it is still a gut-wrenching callous closing scene that will hang long in the memory now the show leaves screens for a lengthy period.

Despite this however, the best moment during tonight’s outing in the Seven Kingdoms takes place in Braavos where Ayra has finally managed to get her hands on a member of her ‘list’. Sadist paedophile Meryn Trant is continuing his “too old” antics from last week and now has a trio of young girls in his despicable chamber. Standing them at attention, he circles like the predator he is before brutally whipping them; clearly become aroused by their tears and his domineering power.

He reaches the third girl and performs the same act as he did on the others – lashing her savagely with his cane. Unlike the others, the scraggly-haired girl doesn’t move a muscle or make a single sound. Obviously angered, he lashes her again, and again, and yet still no reaction.

Ordering the other girls away, he bitterly punches the quiet girl in the stomach, launching her to the ground where he finally gets the groan of pain he so desperately desires. Crouching and seemingly wounded, the girl leads Trant into a false sense of security, allowing him to edge just a little closer. As quick as a flash, she pulls off her face to reveal Ayra who leaps and plunges a blade right into his left eye. Screaming in agony and partially blinded, she rips the dagger out and shoves in straight into his right eye before peppering his torso and chest with relentless stab wounds.

Explaining why she is on his list and why she is so pleased to finally have the chance to kill him, the young Stark girl pulls the near-lifeless villain upright and super-slowly draws her blade across his throat, dropping his dead body like a sack of potatoes.

It becomes clear however that Jaqen and the Many-Faced God are not impressed that she has taken a life against their will when she returns to the House of Black and White; ensuring her a punishment that she will never forget or escape. Seeing how our favourite heroine will adjust and survive in the sixth season will be incredibly surprising and engaging.

This season finale serves up some of the HBO fantasy epic’s most engrossing, harrowing and dumbfounding sequences. So many stories are left untied, and many which audiences – myself included – thought would conclude in a particular way have spawned newer, more intense strands which we’ll have to grasp onto when Season 6 arrives.

Mother’s Mercy solidifies just why Game of Thrones is so urgent and unmissable – it simply erupts with density and drama that consistently shocks, stuns and leaves us awe-struck. Westeros is quite possibly the most dangerous and heinous location imaginable, but the countdown to return starts right now.

Scott Davis - Aug 4, 2020 0
To celebrate the anticipated release of the second season of...