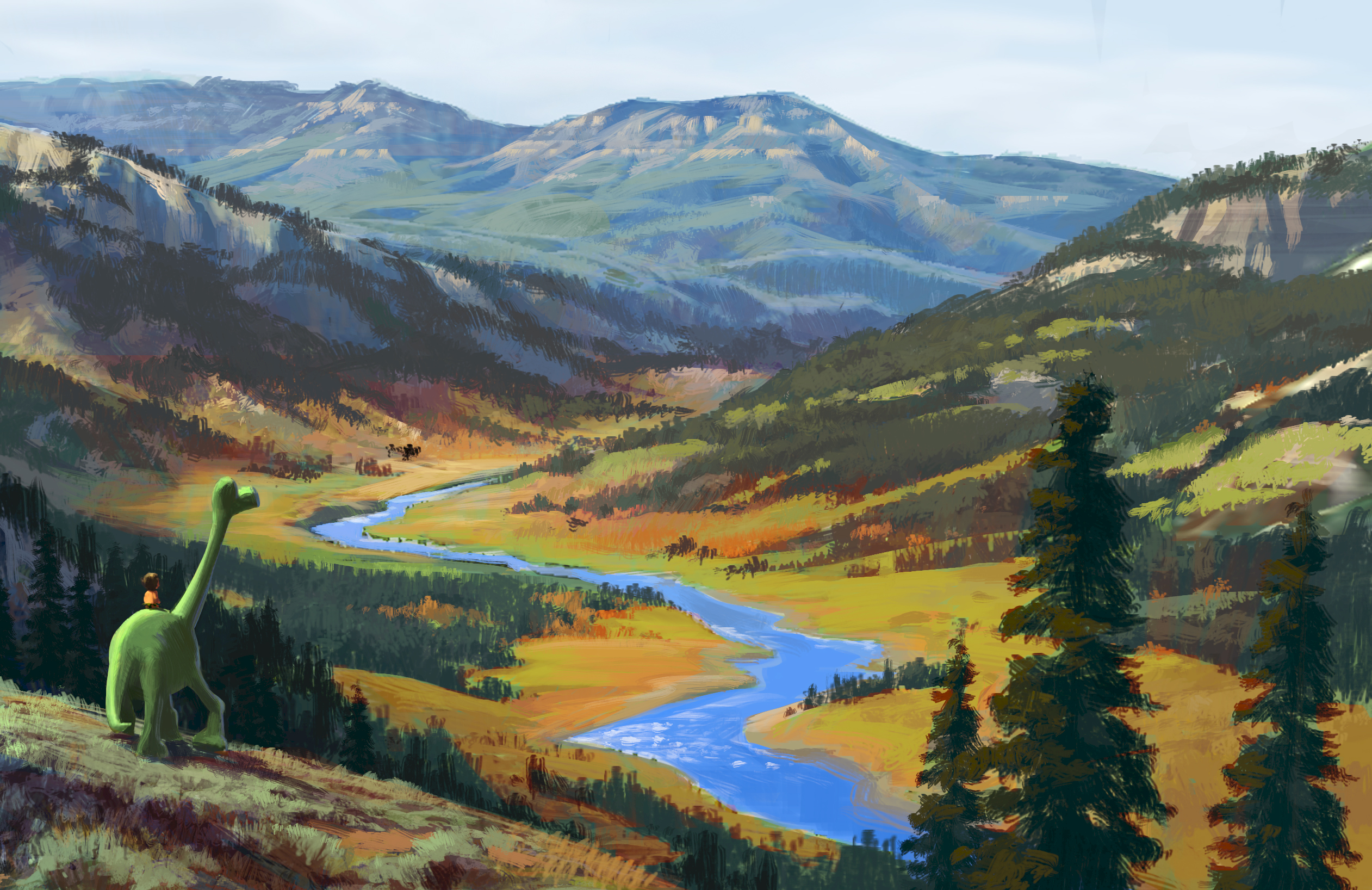 For Pixar’s latest feature, ‘The Good Dinosaur’ the presentation from director Peter Sohn was a distinctly human affair. Before even mentioning the forthcoming animated adventure, the director detailed his own origin story. How he grew up a son of two South Korean immigrants in America, how he fell in love with film, and how the times he saw his mother reacting to films was when it was in speechless moments, animation, movement, universal beats that cut through any language.

As the presentation came to Pixar’s new feature we were made to understand just why today of all days we went through that journey.

The Good Dinosaur posits a ‘what if’ of a world where the asteroid that wiped dinosaurs off the face of the planet missed, and thus the great beasts evolved and went further into being the top tier of the food chain. The film focuses on a small Apatosaurus named Arlo, very much a coddled, cared for child in a farming family, as he becomes lost in the world and has to take his first steps alone.

The Good Dinosaur presents elements of The Lion King, Finding Nemo and Dumbo in the narrative and use of species to create a shorthand, a world and easy to understand emotions that go beyond words.

[pull_quote_right]A little bit of Miyazaki love,…it’s all little details in the world that make things feel real.[/pull_quote_right]On his journey back, Arlo runs into a feral human boy, named Spot, who speaks only in guttural noises and yelps, and moves on all fours. The animal side-kick to Arlo’s straight-laced companion. We didn’t see much of the two together, but Sohn showed a 2 minute clip that went from beautiful wonder within the world to intimate character dynamics and then brought on multiple moments of pure heartbreak, followed up by sweetness.

We barely saw any of the film, barely knew any details, but Pixar strikes hard and tears were soaking the audience before the clip ended. A stunning short snippet of a film that looks to offer a lot of grand designs, neat flips of conventions and cultures, environments that are all-animated but look like they are out of an IMAX documentary and a strong emotional core.

“We’ve been really trying to create an immersive space, really trying to respect the world of Arlo in terms of the characters he deals with. In the Ice Age it’s a different kind of era that they are playing with, the character is a much more youthful character, Spot and Arlo. I love those movies, this has been a deliberate choice to make something tonally different. A little bit of Miyazaki love, looking at something that could be small and dangerous and letting it breathe. It’s all little details in the world that make things feel real.

“If you look closely on Arlo he has details of his scales, but if you look at the background it is fascinating. The real capture of light, to do that in a computer, is just amazing. Having done research riding cows, going through rivers, it was awe-inspiring. I have a love for cinema in terms of trying to capture those scenes, from John Ford to David Lean, using the world to make your characters seem small or powerful. It’s just movie love.”

Since just yesterday it was confirmed that Jurassic World has pretty much broken every box office record they could find, the fascination of dinosaurs, and the creation of them as monsters and, in the case of The Good Dinosaur, protagonists in cinema made for interesting thoughts from Peter Sohn.

[pull_quote_right]I’m a huge fan of Harryhausen, King Kong battling something. There’s spectacle to it that’s inspiring.[/pull_quote_right]“Other than the concept that they were real, they existed, they weren’t fantasy characters, and the amount of evolutionary changes that happened in the species was incredible, and they’re still this magic puzzle. For me anything like that will always be fascinating, anything about history, we continue to find things about Amelia Earheart. And for kids, there’s so much to learn about, their culture, the herbivores and carnivores. It’s a nerdy love you get when you’re young.

“There are some that are not friendly for sure, but it’s really trying to find the emotional core of these characters, make them universally gettable in terms of things we’ve gone through in our lives, in terms of overcoming fear and finding strength in yourself. There are monsters out there that you have to defeat, but there are internal ones that can hopefully deepen the journey. I love a good dinosaur movie where they are treated like beasts. I’m a huge fan of Harryhausen, King Kong battling something. There’s spectacle to it that’s inspiring.

“I hope they always make movies like Jurassic World, and I love the other side to, as long as cinema explores things. There’s been movies like this before, it’s just trying to put your thumbprint on it.”

The cast includes Jeffrey Wright and Frances McDormand as Arlo’s parents, Sam Elliott and Anna Paquin as T-Rexes and Steve Zahn as a vulture-like Pteradactol, but with Sohn’s illustrious voice acting career, will he return to acting? He had some things to say about his casting as Emile in Ratatouille, and Squishie in Monsters University.

“Those characters were built, Brad, when he took over Ratatouille, he wanted someone who ate a lot of garbage and had not really an opinionated taste, and playing Squishie, who is this guy who is innocent and sincere, ‘is that what you guys think of me?’ ‘Kinda’ so it’s parts of me that I’m not looking for, but they’re looking for in the character.”

Although Peter had directed the short film Partly Cloudy, this is his first foray into the feature film landscape, but it wasn’t always his film.

“The original director, Bob Peterson, came up with the concept and I slowly, right after that, helped him with his pitches, just on an artistic level, before he ever made me a co-director on it. So there was always that first idea of this boy and dog and what that could be. And when we had the director change, Bob was still there, I love him very much and he’s so brilliant. All that stuff is still there, I want to honour it. There were some big changes, but that initial heart of it was Bob’s and I still have a lot of respect for, and fought for.”

Sohn has a lot of sincerity, and believes in what he says, and who he talks about. He is especially kind towards Pixar for the length of time that the film was pushed back to get it right, rather than rushing out when things went pear-shaped.

“The pressure is intense, but it’s never overwhelming because everyone’s intent is to make the best thing possible. A lot of things have been said about Pixar, but they put their money where their mouth is, they moved the date to make it better and better. It says a lot.”