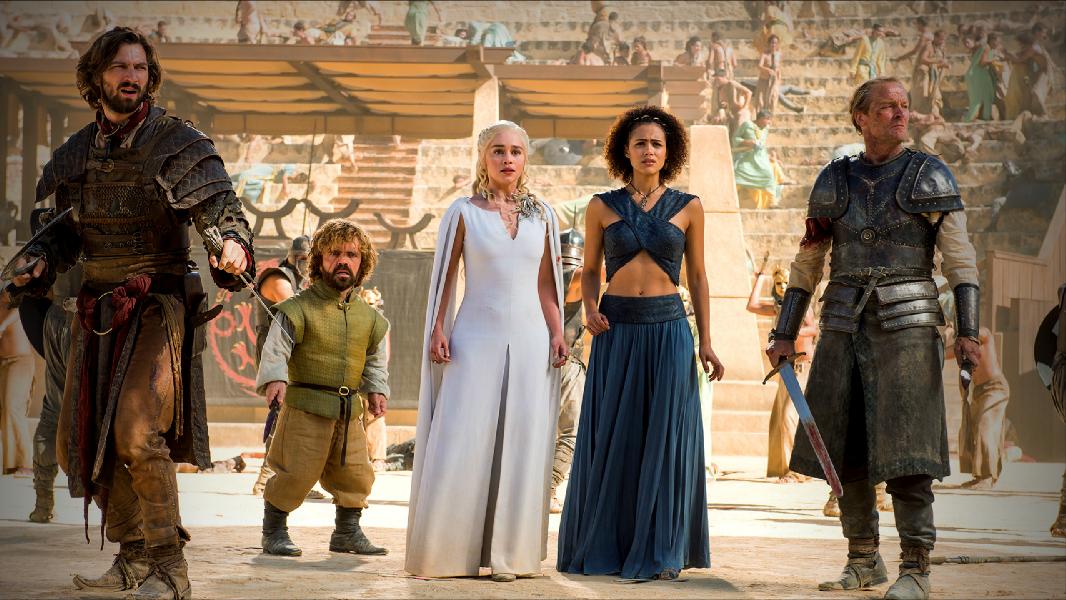 By traditional standards in Game of Thrones, the unfathomably spectacular 30 minutes of last week’s encounter would have been Episode 9 material. All of the HBO fantasy epic’s finest or most shocking moments arrive in the penultimate hour; be that Ned Stark’s beheading, the Battle of Blackwater or The Red Wedding…

Despite this, tonight’s endeavour intends to – as Daenerys so brilliant stated – “break the wheel”, and boy does it achieve as such. The Dance of Dragons serves up yet another emphatic adventure in Westeros which is brimming with showstopping sequences and a prolonged finale to rival any climatic set piece in the show’s history; standing tall even alongside last week.

The Title: ‘The Dance of Dragons’

Tonight’s hour claims its name from a Westerosi fable when serves as young Princess Shireen’s source of reading material. As we have come to know over the past seasons, her affection for literature has confirmed her as one of the brightest and most collected members in the Seven Kingdoms; far smarter than many twice, nae thrice her age.

A beautiful and poignant moment early on sees humble Hand of the King Ser Davos offering Shireen a hand-carved stag as a gift thanking her for granting him with a life-changing skill; the ability to read. Stannis commands his most loyal servant to leave Camp for a number of days which at first seems somewhat normal but the reasoning behind it utterly stings with malice.

The titular story in question – “The Dance of Dragons” – tells of two warring kings in their desperate surge to claim what’s believed to be theirs: The Iron Throne. They coat the world in piles of dead and embers as dragons battle as ferociously as man. The retelling of the tale cements the behaviours of those with a desperate claim from rule, no more so than her broodingly determined father who seriously proves he will go to any lengths to confirm his identity as the King of the Realm.

We are staying firmly with the Baratheons on this one. After an impromptu attack from the Boltons who burn Stannis’ Camp beyond recognition (even torching their poor horses…), it is imperative that he and his men have every strength on their side as they descend on Winterfell. With no Jon Snow, the only major influence source available is Melisandre who cruelly convinces him that the Lord of Light requires another sacrifice in order to realign their predominate power.

After the tender scene with Ser Davos, Stannis himself asks to hear from Shireen’s book to which he asks his young daughter to pick a king to side with. She replies that she would pick neither which causes the King to spill a monologue about making hard and often saddening decisions – much like the one he has ordered and is prepping his child for.

Shireen steps out and is escorted to the pillar where The Red Lady offers her wise words and spell to the almighty other power before torching the wood in which the Greyscaled child stands. She screams and begs for her mother and father to free her but Stannis is firm. As Shireen wails in agony, he mercilessly watches his legacy burn and suffer until her horrifying end.

Considering David Benioff and D.B. Weiss have really furthered Stannis’ characterisation throughout this season – making him almost a somewhat protagonist thanks to heartfelt family exchanges, smart comic whips and detailed analysis of the Baratheon identity – to watch all that wither away in mere minutes is disappointing. Sure, it is brilliant storytelling and renders the ‘Would be King’ with serious callousness, but it a shame to see the foundations of something purer become undone. Not even Roose Bolton would murder his child…

After an absence last week, schemes are beautifully hatching in Dorne and Jaime Lannister is right at the centre of the silk-spun web. The “Kingslayer” is granted the right to return his niece (and illegitimate daughter) Myrcella back to King’s Landing, but she’ll be bringing her betrothed Prince Trystane along too and their matrimony will be conducted in King Tommen’s Capital.

Lucky to survive in this gorgeously plush, yet dizzying deceptive landscape, Jaime is thrilled by such a proposition and wholeheartedly agrees. His ‘solider’ Bronn is also freed but as repayment for punching the Prince, he must suffer a humiliating – and hilarious – blow to the chops at the hands of Doran Martell’s guard.

Despite popular opinion, particularly from his sister-in-law Obara – who is on extremely thin-ice with the Dornish leader – he dedicates his services and his people to the crown, praising Tommen as the rightful ruler of the Seven Kingdoms. Obviously such statements are pleasing to Lannister ears, but there is hidden detailing brewing subtly underneath white-glazed smiles and full flagons of wine.

Doran informs that Trystane will fulfil his brother’s desired place upon the King’s Small Council and will be a valiant gateway between the two great nations. It seems like a perfectly fair deal and trade, but the suspicions are supremely evident, and alarm bells ring louder in Westeros when things are seemingly simple.

Much like the breathless climatic sequences of Hardhome last week, the closing 20 minutes of tonight’s hour serve as the episode’s truest hallmark. Together, these last two episodes have offered some of the very best in the show’s entirety.

Dany reluctantly sits alongside her council – now featuring her most prized ally Tyrion – at the Fighting Pits of Meereen as ‘The Great Games’ get underway. Warriors embark on the sand and pledge their allegiance and life to Khalessi much to her displeasure before awaiting her approval for their bout.

A single hand-clap is all that’s required and soon swords are swinging, shields are swiping and heads are rolling. The barbarity of the ‘Free People’s source of entertainment is even a little much for the Lannister to bear claiming he sees enough violence in his business and does not require as such in his leisure.

The next battle gets underway and this time six men occupy the arena – one of the champions being Ser Jorah. The fight commences in brilliantly brutal fashion and Mormont evades death a handful of times, making him one supremely lucky victor, but it isn’t until he stands tall and stares at his queen that he notices what is wrong.

Launching a spear fractions past the Mother of Dragons, the blade penetrates a hidden Son of Harpy and then chaos truly erupts. Hidden in the masses of spectators, hundreds of iron-faced assassins reveal themselves and begin slaughtering everyone in their path as they near closer to our rightful Queen. Her Unsullied do their best but waves of them become lifeless, forcing Daario, Tyrion and Jorah to really protect Dany. Her public ‘husband’ gets littered with knife blows and is left to die along with a parade of others.

Soon the Sons of the Harpy have Khalessi and her team truly surrounded, with only a handful of loyal soldiers to aid and protect, but then a rumbling roar fill the air, followed by a stream of orange-black. Drogon crashes into the arena and starts picking off attackers; ripping their heads from their spines and coating them in fiery death.

He is peppered with spears and clearly suffers great injury, but the loyal dragon protects his mother the way he should. She mounts his gigantically scaled back and heads skywards, leaving all those still alive utterly stunned and compelled.

As we prepare for the final instalment in this remarkable season, everything really is to play for and you can be sure that the shocks aren’t finished yet. The Dance of Dragons was a stunning hour which brilliantly mounted with tension, excitement and crippling horror. Stannis’ actions are wholly abhorrent, but his surge on the Boltons’ overthrown land is bound to be biblical stuff, plus the tag-team of Dany and Tyrion is proving to be utter televisual gold.

Emilia Clarke stars in trailer for ‘Above Suspicion’