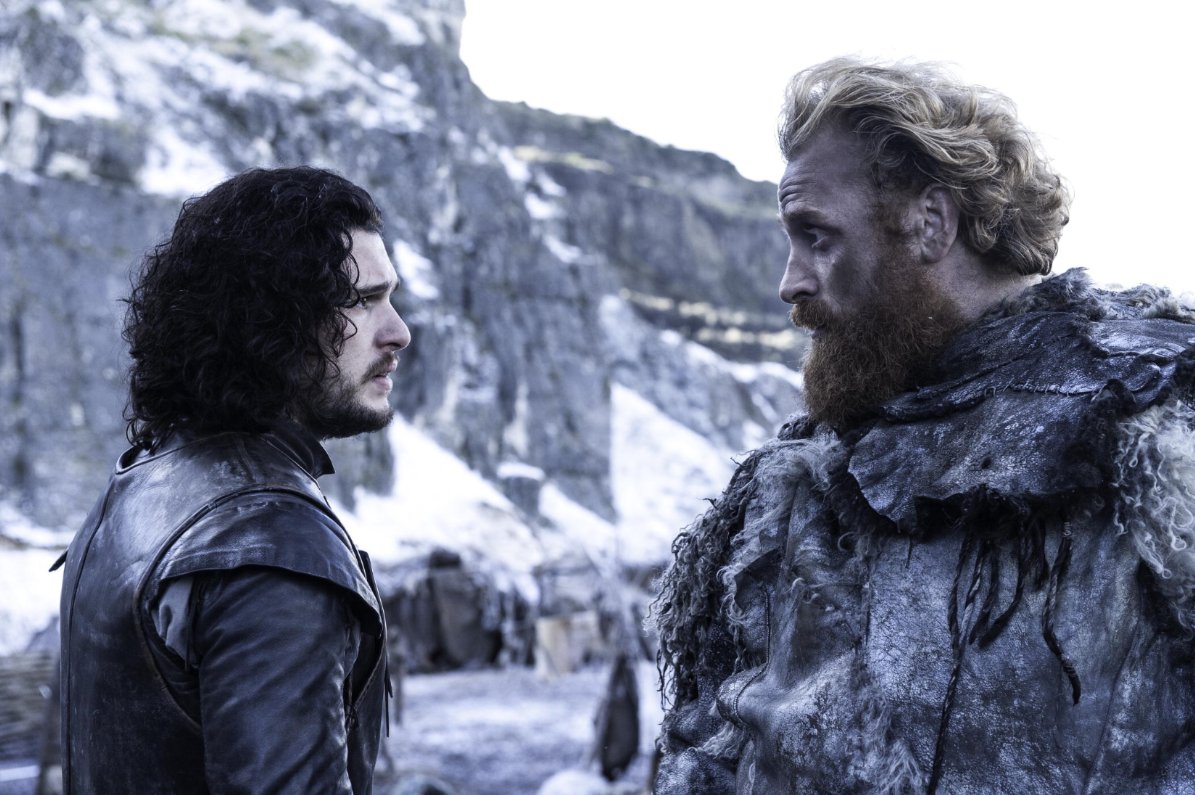 Just when you think you’ve seen everything in David Benioff and D.B. Weiss’ arsenal, the showrunners of HBO’s flagship epic launch a curveball which smacks you firmly in the cheek; blasting an array of teeth from the mouth in the process.

Last week audiences embarked on a quainter, more emotionally astute hour as we saw the High Sparrow dominate King’s Landing with his softly drooled authority and band of religious disciples. Tonight however Game of Thrones goes rogue; cranking everything up to 11 and serving an adventure so mind-meltingly mental you’ll ferociously fist-pump in all the madness.

To understand where tonight’s episode finds its name, we must venture to the North of the Wall. Hardhome is the founding land of the ‘Wildlings’ – sworn enemies of Lord Commander Jon Snow’s “Crows” as they are so bitterly dubbed.

Knowing any brother of the Night’s Watch dismounting on their land could cause a riot, the arrival of the Stark bastard and his men proves to be a seriously bitter pill for a number of the residents, no more so than the skull-draped Rattleshirt and the resident Thenn. Arriving alongside new ally Tormund, Snow offers his appeal to the Free Folk; leave this land and prosper behind The Wall, and in repayment, stand alongside his brothers when Winter really comes and the White Walkers descend.

Reluctance, distrust and dishonour circulate – with many quick to refuse such proposals – but Tormund stands by the Lord Commander and informs his people that this is the only way to ensure the progression of their kind. Little does he know that all hell is about to break loose…more on that later.

The most relentless slack-jawed scenes come later on in Hardhome, but a moment outside the snow-sodden shores proved to be supremely compelling. Many miles South in King’s Landing, a filthy, weathered and dragged Cersei quietly rocks in her putrid cell. We have seen her look inferior a number of times throughout Season 5 – predominately in the presence of Margaery – but never has the Queen Mother been screened with such aching vulnerability.

Still acid-tongued as always, she never gives into confession when she is questioned by a Sparrow officer who psychologically and psychically taunts her. After she growls her desire to grant this woman the most repugnant death imaginable, the draped figure takes her ladle, fills it with water and slowly pours it on the floor in front of the desperately dehydrated prisoner.

As she exits the cell, Cersei falls to her knees like a helpless animal and laps the split water up from the grubby stone floor. Her desperation and isolation make for surprisingly uncomfortable viewing as she is usually such a domineering presence in the show.

With a large absence from the Capital for the vast majority, and only a slight (but hugely rewarding) sequence in Braavos, tonight’s most intriguing plans are being hatched in Meereen. Tyrion and Ser Jorah now stand in Daenerys’ presence, with “The Imp” delicately and wittily explaining why her Unsullied shouldn’t kill them where they stand. Clearly somewhat taken by the Lannister, the deep-seeded mistrust of Mormont is still a wound too fresh to heal which leads Dany to quickly remove him from her city.

Later on we meet Khaleesi in her chambers sharing wine with ‘The Gift’. Furthering their earlier conversations, Tyrion explains the processes made in order to reach the rightful Queen. An outcast and murderer lacking any sense of direction or purpose begins a venture to something better, more prosperous, yet his reservations have rightly stayed intact along the weary roads.

Dany appoints our favourite Lion as her adviser and he commends her for her recent decision choices in order to rule with more consistency and grace – reopening the fighting pits, marrying into a wealthy and named family – all things a Queen must do to ensure longevity and more important, reliability.

Despite clearly pleased to be stationed alongside the Mother of Dragons and not executed which could have easily been such a fate, Tyrion is perplexed as to why the Targaryen wants to surge on Westeros and land a seat on the Iron Throne when she has an important and profound role to play in Meereen. Her answer just completely reinforces why she should be the ruler of the Seven Kingdoms:  “I’m not going to stop the wheel. I’m going to break the wheel.” Her true campaign on King’s Landing is about to kickstart.

To quantify this as a moment is undoubtedly overstretching as the most mind-bogglingly brilliant scenes in tonight’s Westeros encounter occupy about 25 minutes. Jon Snow and Tormund are guiding the thousands of agreeable ‘Wildings’ into boats upon the shores of Hardhome. The oars begin to paddle and a number set sail for their new home, but quickly things descend into utterly unimaingable chaos.

A pulsating surge of snow begins to avalanche from the mountain side and the Winter winds start to bitterly blow. The duo order for the gates to be raised shutting down as much of the bay as possible. Soon enough a threat is starting to smash its way through the towering wood: the Army of the Dead.

Waves and waves of skeletal, zombified warriors start infiltrating the shores, slicing and stabbing everyone in their path. Bloody war ensues and frenzy sets in. Some flee for the remaining boats, others slain where they stand. The only option is to fight together. Recalling every biblically epic blow or blade-swing here is impossible; the scale and design of the battle is so dense, so aesthetically rich and so beautifully horrific that the eye barely has time to keep up with the hysteria. It is up there with the eye-watering Battle of Blackwater for the most impeccable prolonged sequence in the show’s history.

The worse is yet to come however as from deep in the frosty nothingness emerges the White Walkers. With Dragonglass and Valyrian Steel, Snow manages to obliterate one of the ghoulish invaders, but their haunting and dominating presence is too much for even this ensemble arm to deal with. There are even possessed children attempting to kill the Free Folk and “Crows”; torsos skinless and malnourished – truly harrowing stuff. As terror rages on and hundreds fall to their demise, all Snow and Tormund can do is battle through the corpses and look on as they manage to board a fleeing ship.

As the Lord Commander looks back at the blood-sodden desolation on the ‘Wildling’ land, slow and demonic footsteps walk across the plank. The camera pan up to reveal an overlord White Walker equipped with satanic spikes on his cranium. After a tense stare, the Night King raises his arms like a God and begins to resurrect every deceased member who lay upon the battlefield.

An enormous array of bodies stand up and open their eyelids to reveal that dreaded ice-blue colour. Nearly all of Tormund’s people are now under the control of the most fearful and impossible foe in all of Westeros, and they will be returning to finish the job…

Hardhome was Game of Thrones at its most earth-shatteringly incredible. Truly cinematic television that towers with visual finesse, immaculate characterisation and a narrative completely alive with shocks and stunners. The show’s tradiotonal format is to provide the most shocking events in the ninth episode (Ned Stark’s Beheading, Battle of Blackwater, The Red Wedding), so if the showrunners are able to top the mania which unfolded here, then audiences worldwide are in for something far beyond a treat. Absolutely impeccable stuff.