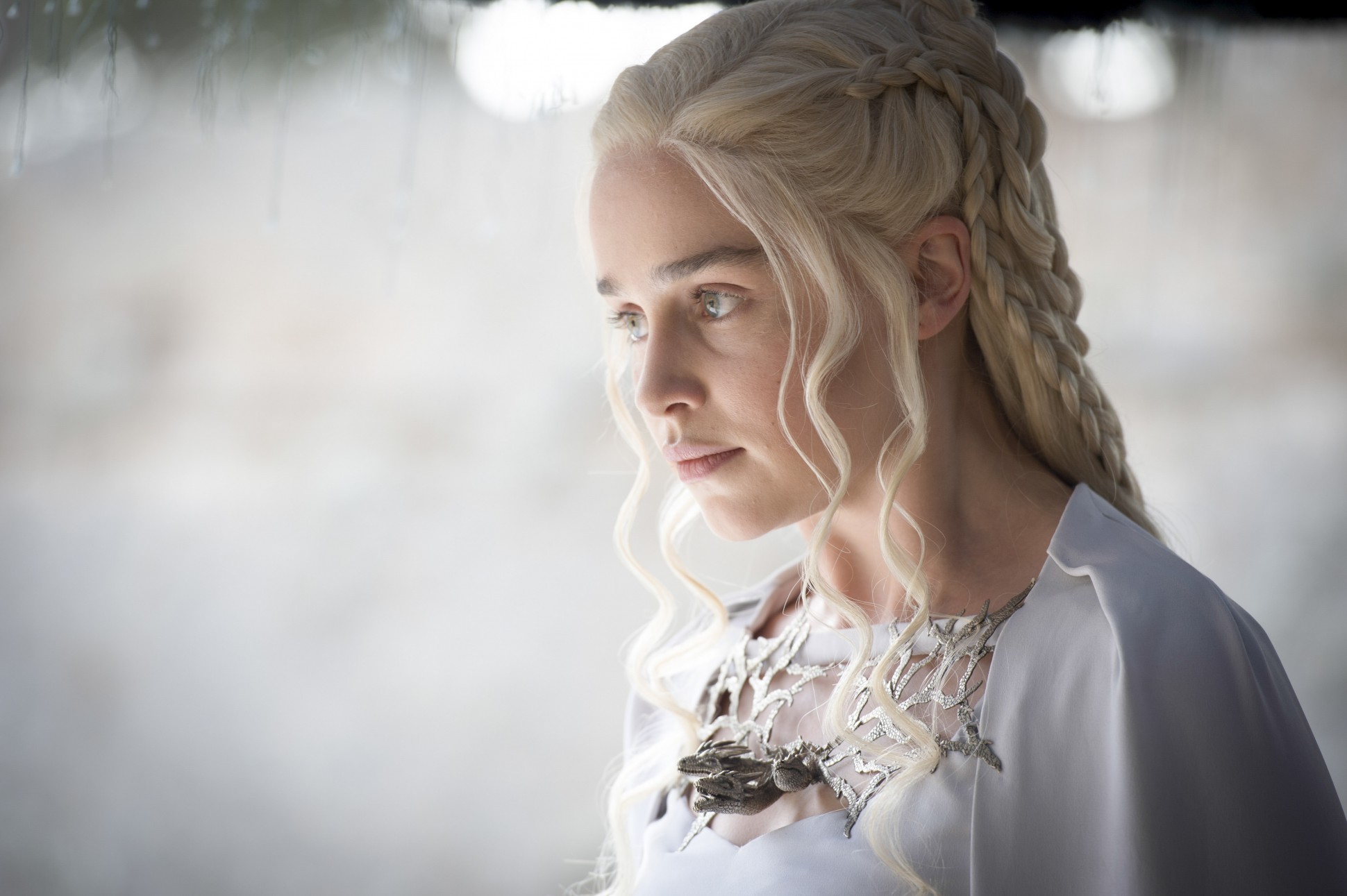 After the dizzyingly horrid climatic frames of last week’s outing in Westeros, it is supremely clear that more than a storm will ensue when Winter truly arrives. As the frosted flakes quickly begin to descend in this seventh hour of Season 5, it isn’t only the Northern environments across the Seven Kingdoms that provide a bitter chill.

With severe movements and motives unravelling in King’s Landing, an icy surge on Winterfell from Stannis, plus Ser Jorah and Tyrion wrongly en route to ‘Slaver’s Bay’, serious drama cooks up in The Gift which in turn provides one of the season’s finest outings.

The Title: ‘The Gift’

One of the most compelling and unpredictable journeys throughout HBO’s fifth series has been the voyage of Tyrion. Originally travelling with Varys before being kidnapped by Ser Jorah in Volantis, he has been travelling from his hated homeland to Meereen with the intention to ally alongside the Mother of Dragons herself, Daenerys.

In tonight’s encounter, the duo manage to reach their goal – well, part of it – by landing themselves in Dany’s presence. After agreeing to reopen the fighting pits, Khaleesi reluctantly agrees to watch the barbarity unfold in order to honour local tradition – a term she is becoming supremely aggravated by. After being purchased by a wealthy man at a slaves sale, Mormont and “The Imp” are enlisted along with others to fight in the doomed gladiatorial ring.

Throats are slashed, heads are smashed and very quickly Dany has seen enough carnage. Knowing this is his final chance to get her attention and hopefully win back her affection, Jorah bursts out from the dugout and begins beating all the men occupying the pit. Disarming, punching and shielding his way through adversity, Dany’s interest begins to peak at this helmeted nobleman, but as he reveals himself, she quickly feels bitter and aggressive, demanding for Jorah to be removed from her sight. Clearly his prolonged conspiring against her is a sin to brazen to forgive. However just as he is being escorted from the arena, he screams that he has brought her a gift.

“It’s true” bellows a voice as Tyrion reveals himself to Khalessi. “I am the gift”. When she asks who he is, the dwarf reveals his identity leaving her jaw agape. “It’s a pleasure to meet you, Your Grace. My name is Tyrion Lannister”. Will the alliance now begin and see her push to the Iron Throne? Here’s certainly hoping…

As Lord Commander Jon Snow rides out of Castle Black alongside Tormund Giantsbane, armed with a satchel full of Dragonglass, Samwell Tarly is somewhat isolated amongst his brothers of the Night’s Watch. After a sensitive but saddening sequence which sees the passing of Maester Aemon (and book-readers rejoiced at the inclusion of a famous line), Sam delivers a poignant eulogy as the great Targaryen is laid to rest. However despite such kind words, the bitter Aliser Throne butts in and reminds that he now has very few friends left up here, and with Snow out of the frame, things will likely become complicated.

His beloved Wilding girl Gilly is later doing some washing when she is infiltrated by two twisted brothers who are obviously keen to get a fix. Making sexually aggressive passes at her, their intention to rape is extremely evident, but as they pin poor Gilly to the wall, Sam storms in, blade in hand. Asking politely to leave her alone, his plan doesn’t go well and soon he is being senselessly beaten by the rogue Night’s Watchmen; kicking, stomping and savagely punching his face to what seems near-death.

We all know Sam’s tubby exterior and softly spoken tongue are merely technicalities however; in hindsight, he is probably the most successful and fearless knight across all Seven Kingdoms after defeating a White Walker and a Thenn. Blooded, battered and broken, our lovable hero stands and still threatens to take the two brothers down, luckily for him he now has a drooling and snarling direwolf by his side. No man – no matter how proud or able – is likely to pick a fight with Ghost – he’ll quite simply devour the throat.

Clearly after last week’s events which saw the detainment of both Loras and Queen Margaery Tyrell, Cersei is pretty happy with herself. As Lady Olenna frantically endevours to see her grandchildren’s freedom in the Capital, the Queen Mother is busy reassuring a surprisingly feisty King Tommen that she is doing all in her power to aid her daughter-in-law during this troublesome time.

Barking orders and even threatening with war, the young ruler is distressed that he cannot help his beloved despite having all the power in the Realm. Through perfect crocodile tears, Cersei explains that she will defend him and his honour until her very last breath; she would burn cities to the ground for him, watch the world crumble at his and her mercy. He is her son and she loves him dearly. As the pair embrace and Tommen’s fiery rage begins to fizzle out, she knows she installed enough hope in his mind to get him off her case.

Quickly with the momentum in her stride, Cersei heads to the dungeon where a ragged and filthy-dirty Margaery is slumped in the wallowing darkness. This is the first time we have actually seen the Tyrell beauty look vulnerable and undesirable which makes the reveal all the more powerful. Delicately spewing her false concerns for her wellbeing, Cersei offers a similar calm tone to the Queen as she did the King. However Tommen’s wife isn’t quite as gullible and sees right through her lies. Leaving her now in-law deeply angered and distressed, the Queen Mother departs the crypt with a twisted smirk across her face, but this certainly does not last long.

The reason Cersei’s bitter glee fails to see her through is due to the man she made allegiance with earlier in the season. The man who put the Tyrell twosome on trial. The power shifts in King’s Landing throughout these seven episodes has been relentless; upper hands keep coming and going as quickly as the palm is able to grasp as such, but perhaps we have now found the biggest and potentially boldest player in all of the Realm: the High Sparrow.

After a brilliant dialogue exchange with Olenna in which she attempts to buy his vote, threaten the land with starvation and famine, plus question the true notions of his belief, it is ever-clear that the High Sparrow is a man of his word. “…you are the Few and we are the Many. When the Many stop fearing the Few, well…” the gentle old man claims as he gathers his bucket and exits the room.

Fresh from belittling the Queen, Tommen’s mother meets the High Sparrow to discuss the duo’s potential sentencing should a trial stand in which he assures they will be tried and punished justly like every other who faces such a fate in the eyes of the Gods. Seeming delighted at the words spilling from the rag-draped religious man, she grants him her ear when he begins to rattle off information about the room in which they stand. Lulling her into a false sense of security, the High Sparrow reveals the real reason why her summoned Cersei.

Once you remove the greed, hope, lies, pride and honour of a person, their true colours begin to blossom; their nature springs to life as the endless weight burdening their lives is dismounted, piece by piece. One such individual who has made this particular transformation is relatively close to home in King’s Landing and he has many things to say about the Queen Mother: Brother Lancel.

Appearing behind the High Sparrow like a haunting shadow, Cersei clocks on to what’s happening, but it is too late. She is ruthlessly grabbed by the Sparrow guards and thrown into her very own cell promising that the last face they will all see is hers when she takes their lives. The threats fall on deaf ears as the door bolts shut and leaves the tatty man of God at large in Westeros’ most corrupt and dominant location.

Whilst sadly Ayra remained absent, The Gift provided a greatly thrilling and immediate hour laden with detailed twists which ensure the final three episodes will not only be brimming with excitement, but also frequently surprises. Whilst some ongoing loose ends are nearing to being tied, we have little to no idea how they will do as such. Episode 8 really cannot come quick enough…