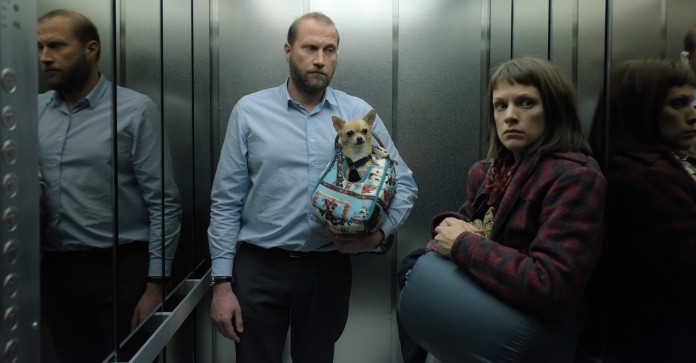 For director Dominik Moll and his lead star, Francois Damiens, News From Planet Mars marks a glorious return to the world of comedy. While the former’s preceding endeavour was the elusive, pensive thriller The Monk, starring Vincent Cassel, Damiens took a rare deviation into the realm of the drama, with an impressive turn in the harsh, impassioned affair, Les Cowboys. It’s a joy to see him back doing what he does best however, in this consistently hilarious picture, allowing him to display his quite striking aptitude for comic timing.

Damiens plays Philippe Mars, living out such a habitual, monotonous lifestyle that he had forgotten there was any other way to exist. Until he spends some time with his colleague, Jerome (Vincent Macaigne) who has a nervous breakdown at work, accidentally sliced off Philippe’s left ear, and then subsequently escapes from a mental institution. Without many friends, Jerome pleads with Philippe to let him stay with him a while, and reluctantly, and begrudgingly agreeing, the latter allows Jerome into his home, where his two kids are currently staying, while his ex-wife is busy with work commitments. When Jerome invites Chloe (Veerle Baetens) round for dinner, a new love interest he met during his short stint at the institution, that’s when things really do begin to get out of hand.

There’s a brilliant chemistry to the relationship between Philippe and his two teenage children, as we watch how he endearingly navigates his way around parenthood and hoping to somehow connect to them – and it’s these intimate moments where the film comes into its element. It’s no coincidence either that when he settles down to watch a film with them both on his birthday, he opts for The Marx Brothers, nor is it that we zoom in on Harpo’s face. For Damiens shares similarities to the character, both excelling in physical comedy, and though there’s a distinct irreverence to their art (Damiens was a successful candid camera performer earlier on in his career), there’s also a deep sadness too.

As we progress towards the latter stages, we do lose sight of that intimate approach, heading into surrealistic territory – though it had been bubbling under the surface from the very start of this unique endeavour. Moll has shown a talent for blending naturalism and overstated frivolity, similarly to British sitcom Peep Show in that regard – which becomes a fair, palpable comparison when we watch Philippe prepare for a dinner party, which gets completely disorderly, akin to the popular episode in the sitcom’s most recent series – following that same formula whereby everything is supposed to be so easy, and yet descends into complete and utter chaos, where you struggle to comprehend quite how we reached this situation. It’s a tried, tested and triumphant narrative structure and comedic device, and is what shows such as Seinfeld thrived off.

The reason News From Planet Mars works, however, is that the fantastical, absurd nature of this narrative is grounded, persistently, by the empathetic, nuanced titular protagonist. We laugh at the farcicality, but his life is at a crossroads and he shows signs of depression, which adds a subtle poignancy to proceedings, and ensures this is a comedy that simply cannot be missed.