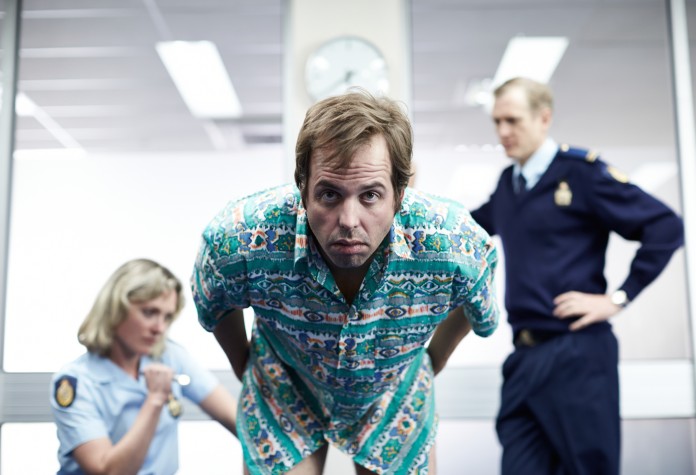 In Melbourne, 1983, TV repairman Ray Jenkins was apprehended by airport customs on suspicion of drug trafficking while travelling back to Australia from Bangkok. After refusing an x-ray and cavity search, Ray was kept under police surveillance for seven days at a nearby hotel while they waited for him to emit the (supposedly) smuggled narcotics. This big screen version of the real-life event is a face-achingly hilarious and literally gut-wrenching indie debut, directed by Tony Mahony and Angus Sampson. Sampson, who is more well known for his acting, appearing in the likes of Mad Max: Fury Road, the Insidious trilogy (as Tucker) and the Fargo TV series, here takes the lead as Ray: a docile lug/ victim of circumstance among a lively band of characters that includes Hugo Weaving as the deplorable Detective Croft: an insufferable cop/ scumbag with a playful but vexing temperament.

Despite its moments of abominable bowel gurgling, The Smuggler is more than just an exercise in refined toilet humour. The story is enriched by captivating characters who aren’t just incorporated due to their connection to the real-life event, but serve an actual purpose in the story by either driving it or expanding on the viewers’ understanding of Ray. Yet the script, at times, feels a little too transient and the drama isn’t effectively utilised to meet its latent potential. There are numerous near the nose, suspense scenes, besides the Hitchcockian commode altercations, which could have contributed some spirited suspense and spun The Smuggler into something more than just a fleeting little indie flick. But the tension is side-lined for some, thankfully, excellent comedy.

Various twists also prove pertinent in the finale as story strands coalesce into relevance without being forcibly jimmied with plot points, and The Smuggler emits an incessant air of elegance due to its linear telling. While it never drifts into mediocrity, the story often lingers on moments it doesn’t need to. As a result the film is fun but far too wispy to resonate at the level it could have, had a better balance of drama and comedy been established, but the wide array of characters elevate it immensely. The local crime-lord (John Noble), Ray’s mother (Noni Hazlehurst), stepfather (Geoff Morrell), best friend/ accomplice (Leigh Wannell), stoner lawyer (Georgina Haig)  and a cross-section of questionable cops are all vital cogs that contribute to the conciseness.

Tension mounts as does Ray’s need to excrete during his seven days spent with the drug squad and his anguish is captured “beautifully” in the knotty, pained expressions of Angus Sampson. His twisted, scene chewing performance is also aided by some utterly sickening squelch noises, while the mechanics adjust inside him. There are moments that WILL trigger an involuntary gag reflex, so toilet humour enthusiasts will have plenty to applaud. But it’s the characters and performances that make The Smuggler so much more than the frivolous fart comedy it could have been had it landed in the hands of the Farrelly Brothers. Tony Mahony and Angus Sampson have crafted their debut with a degree of diplomacy but some of the drama could have been better utilised to interject thrills and make the slower scenes more compelling. Yet The Smuggler remains a rich, hilarious and stomach whirling slap in the face of juvenile fart humour and will tickle as much as it titillates.

Clint Eastwood, Michael Peña and Taissa Farmiga on working on The Mule