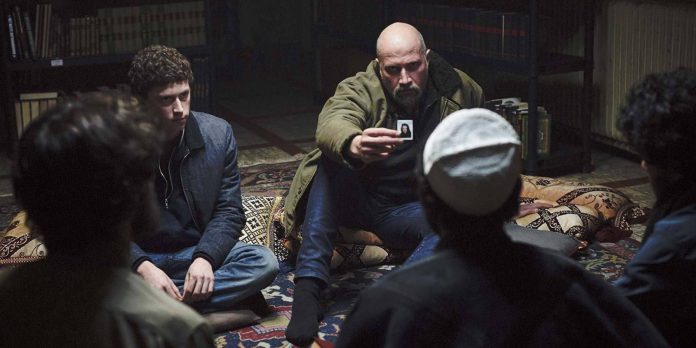 Though steeped in a pertinent sense of socio-political realism, the co-leads of Les Cowboys, Francois Damiens and Finnegan Oldfield, are distancing the production from real life situations, and the current wave of disillusioned, radicalised youths leaving Europe and setting off to Syria. The pair feel the film is about rebellion, and it’s merely coincidental that the paramount narrative – of a young girl escaping from her family and moving to Pakistan – reflects many real life situations.

Coming from the creative mind of Thomas Bidegain, directing for the very first time, having previously penned the screenplays for the likes of Dheepan, Rust and Bone and A Prophet – Oldfield, who plays the missing girl’s younger brother Georges, believes this is a film about family.

“When we were shooting the movie, in the middle section when we were in India, there were the Charlie Hebdo attacks, and we continued to shoot the movie and to tell the story,” he told HeyUGuys during an interview in Paris. “The film speaks about jihadis, but it mostly speaks about the family and how it can be built and destroyed, and how you keep going for somebody you love. I think it’s a hopeful movie with no judgement. ”

“It’s just the period, this is a story of a girl escaping her family, but if this was set in the 70s, she would have been in California taking some acid, or in London doing whatever she wants, but it’s the period, she’s rebelling.”

His co-star Damiens, who plays the father Alain Balland, echoed such a sentiment, offering his take on the circumstances that have left many parents in despair, much like that of which he is portraying.

“I think it can be a matter of coincidence that young people going through a general social crisis and when you have teenagers in despair because they don’t know exactly what their lives are supposed to be, whether they can find a job and will they earn enough to make a living and buy a house,” he continued. “So because they have this feeling of being lost and useless in society at a moment in their life when they are vulnerable, they can just bump into a wrong person, like a jihadist or radical, who takes you out of your normal life. Who would have talked about Jihadi John if he hadn’t done what he did? He’s now become famous because of this choice – this is the sort of thing that can happen to vulnerable people. 30 years ago they might have gone to India, or to London to the US to become a hippie, nowadays there’s a new phenomenon, I guess it’s just a way of running away from despair.”

“But it’s paradoxical, because people have received so many images about the attacks they’d rather not go and see a film about it, they would rather see something that changes the images in their mind. But I think it’s the opposite, this is the right moment to see a film like this, that deals with the same subject, but not at all in the same way as the news channels do.”

Damiens is renowned primarily for his comedic performances, and in France he’s well known for a candid camera TV show – but this role could not be further away, with little room to be funny, as Alain is a very serious man, obsessed with the notion of finding his daughter. The Belgian actor admitted the character’s flaws were appealing, and took inspiration from real life to help craft the role.

“I didn’t go to film school, I studied international business, but the idea was to embody a character who I just observe in my everyday life. From watching people and watching life and trying to perform and to act – that’s how I learnt. I tried to identify with him and feel as he did. I tried to be as obsessive and as straightforward as he was, there was something mechanical about him. One thing came after the other and I had to follow the same path as he did.”

“I see him to be a guy who is quite narrow-minded and he’s not very subtle, not very feminine. He just has one obsessive quest and doesn’t pay attention to the side-effects. But what I found interesting about the character was that he wasn’t likeable, there’s something brutal about him. But as the story goes on and the character evolves we see there’s a heart beating inside and he just falls apart. He begins as stiff and solid and gradually becomes liquid.”

Les Cowboys represents something of a departure for Oldfield too, and while his surname does allude to his British descent (his father is from Surrey), for the role he had to learn how to speak English fluently – and ride a horse, too.

“I used to lie a lot, but I thought it’s probably best to tell the truth. I didn’t have a licence, I couldn’t ride horses, I couldn’t speak English, people wondered why I was even there. But it was cool.”

Oldfield spends much of his time on screen acting opposite John C. Reilly, and he admits he learnt a lot from his co-star.

“John is like he is in the movie, he was nice but very American. In the movie his name is ‘the American’ and in real life it’s similar,” he laughed. “But at the beginning I was impressed, even though I haven’t seen all of his movies, I was impressed. If you don’t do anything he’d eat you alive, not because he’s mean, because you watch him act.”

“We shared a dream, it was his first cowboy part and I was glad because it was my first as well, and a dream for me too. We would be riding and sometimes just have a little smile, it was really good,” he finished.

Les Cowboys is released on June 26th. You can read our review of the film here.