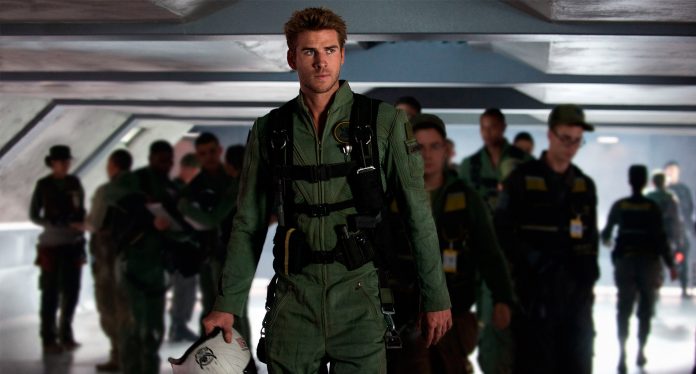 20 years ago film fans across the world became enamoured with Roland Emmerich’s Independence Day, marking something of a comeback for the immensely popular disaster movie genre. Partly what led to the acclaim and cult-like status the endeavour has since gained, was by having an everyman in the leading role, an entry point in Will Smith that the viewer was able to embody and adopt the somewhat blissful perspective of.

However within this superfluous sequel, we are without any palpable protagonist and the picture suffers greatly as a result. There’s no underdog to invest in, and as such, no emotional core. The closest we come is Jake Morrison, played by Liam Hemsworth, a fighter pilot stationed on the moon, helping to protect Earth with a new, technologically advanced defence system put in place following the attack two decades earlier. His partner, Patricia (Maika Monroe) is working at the White House, the daughter of former president Whitmore (Bill Pullman).

The arrival of Dylan Hiller (Jessie Usher) sparks up an old grudge between himself and Jake, but it’s one they have to put aside, as a new army of extraterrestrials prepare for another attack. Mankind may be better equipped, but in this time the aliens are also far more advanced in their own unprecedented means of warfare – as brave men and women around the globe, including, of course, David Levinson (Jeff Goldblum) prepare for battle, to once again save their planet from immediate extinction.

With a myriad of characters and intersecting narratives, it becomes somewhat overbearing to indulge in them throughout this convoluted endeavour. There’s an abundance of characters to invest in, each complete with their respective arc and it’s impossible to keep on top of it all. The preceding production had an injection of comedy prevalent too, deriving from Smith, while there was an air of defiance and inspiration from Pullman’s President Whitmore, but this film comes without either, with no true comedic presence, nor any identifiable leaders amongst this cast.

While there are several shortcomings within the heroes, the villains are far more accomplished in their execution, as the impending attack comes from a completely formidable opponent that seem impossible to defeat. We need this element, and it’s what enriches the disaster movie so much, for we need to believe there is no feasible way of overcoming the enemy, which aids the suspension and makes for thrilling, escapist cinema. Not to mention the fact there’s something perversely entertaining about watching the world ripped apart – especially when left in the more than capable hands of Emmerich, who has become somewhat synonymous with this popular sub-genre.

Yet there remain too many plot holes, and a contrived means of interweaving narratives, and while a huge suspension of disbelief is concerned when watching a film of this nature, the way the characters keep bumping into one another is just absurd. Some of them are on the moon for crying out loud. Susan Sarandon was said to have turned down a role in this film for she found the script to be incomprehensible – and having now seen the finished product, it’s rather easy to see what she meant.

“I promise you, I’ll get her back…” New trailer lands for ‘Jurassic World Dominion’