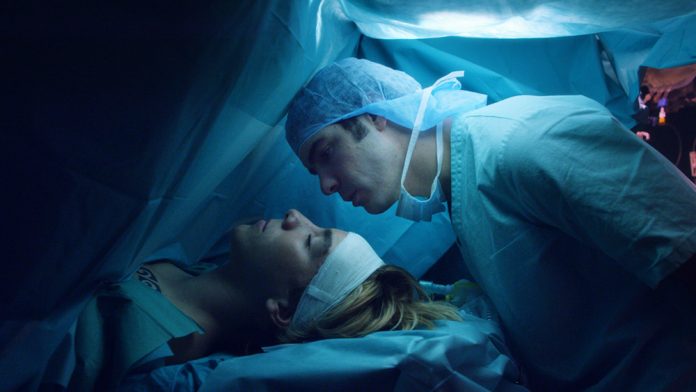 As Simon (Gabin Verdet) glides through the crisp morning air on his bicycle, free-spirited and seemingly invincible, we soon learn this will be the teenager’s very final trip to the beach – for upon his return, in a car with two friends, a crash sends him into a coma, and one he’s never going to come out from. His parents, Marianne (Emmanuelle Seigner) and Vincent (Kool Shen) are alerted and make their way to the hospital to say their goodbyes.

Katell Quillévéré’s latest endeavour, following on from drama Suzanne, is Heal the Living, and the narrative shifts dramatically, as after doctor Thomas Rémige (Tahar Rahim) informs the deceased’s parents that Simon’s organs can be donated to the hospital, we then meet mother of two, Claire Méjean (Anne Dorval), in need of a new heart. No prizes for guessing where this story is heading, as we switch between the donator, and the forthcoming donatee.

We don’t really get to know Simon until after we learn of his death, revisiting his life, and romantic afflictions in flashbacks – and it allows for us to studiously linger over seemingly innocuous moments, but those which now mean so much as he’s been deprived of life. Just him riding a bike, the wind in his hair – nothing particularly unique, but knowing it’s a freedom he’s now lost adds such a distinct poignancy to proceedings.

He is one of several characters we get to know throughout this endeavour, with each and every part, no matter how small, given their own respective storyline, an arc of their own which is injected into the narrative with a minimum contrivance. Whether it be doctor Pierre Révol (Bouli Lanners) or the nurse Jeanne (Minoa Chokri) or even Claire’s two sons, Maxime (Finnegan Oldfield) and Sam (Théo Cholbi) – we explore their interests, their desires. Little additions, be it the love-bite spotted on the neck of Jeanne, or Thomas’s fondness for a rare North African bird, it’s small snippets of information that humanise every character.

While the film shifts from Simon’s story to Claire’s, and the tone changes as we start to appreciate life rather than dwelling on the loss of it, there is one thing that remains a constant within this indelible drama, and that’s the series of wonderful performances. Sagnier in particular stands out as the grieving mother, but she’s matched at every turn by her co-stars. So much so, it’s worth sticking around until the closing credits to learn of a few of the names of the actors that illuminate this tale. Plus, David Bowie’s Five Years plays out at this time, and that is reason alone to remain in your seat.