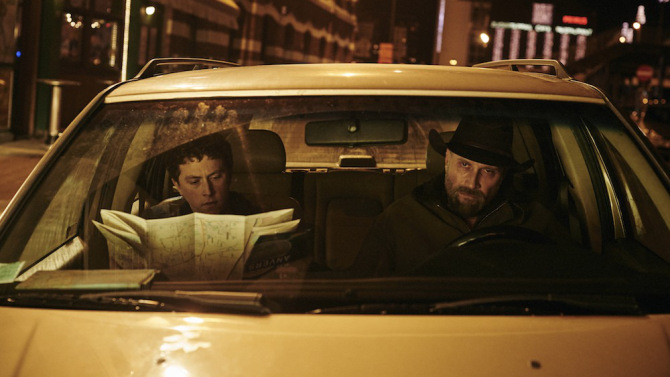 During the present climate, whereby young Brits are leaving the Western world to seek a new life in Syria, and join a terrorist organisation which strives in destroying the society they grew up in, it poses a pertinent, intriguing question which lingers; why? What are the motives behind this decision? What sets somebody off down this path, and caused this disillusionment with a culture that moulded you? Though this is the paramount theme to Thomas Bidegain’s provocative drama, it’s regrettably not one that is substantially explored, and leaves you with a few more questions than answers by the time the closing credits roll.

Francois Damiens plays Alain Balland, a hard-nosed, belligerent father, who becomes obsessed with finding his daughter Kelly, after the teenager disappears with her boyfriend. Though receiving a letter from Kelly to inform her parents she is alive and well, when they discover Islamist propaganda in her room, they realise she had left to serve a treacherous purpose in the Middle East. Given her change of identity, the task ahead to discover her whereabouts becomes increasingly more challenging, and it’s a burden that Alain’s son – and Kelly’s brother, George (Finnegan Oldfield) also takes upon him, desperate to be reunited with the young woman, and convince her to come back home to France.

The backstory to this pensive production is somewhat limited in its depiction, and the film suffers as a result. It would be beneficial to delve into Kelly’s life before she disappears, to help us comprehend why she decided to pack up and go. The first half of this movie does grow tedious in parts too, but it’s worth trudging through before the complex final act. It’s only when you reach the latter stages, with the helpful benefit of hindsight, where you realise the importance of the opening half, and how vital it proves to be to the narrative and overall experience.

Damiens shines in the leading role, in what is a truly absorbing, and unique performance from an actor otherwise associated with his comedic turns, thriving predominantly in his physicality, in slapstick, farcical endeavours. But he remains so raw and human within this title, and is blessed with a nuanced character, unsympathetic in a way that is essential. Though you feel more endeared to him as we progress, realising his aggressive, volatile nature is merely a reaction to his daughter going missing – which he struggles to emotionally grasp, or know how to express his feelings – he is difficult to root for in parts. But this seeks only in making him more naturalistic, as his flaws and imperfections help to craft the character at hand. Ultimately, here is a man who cares only for saving his offspring, and who can begrudge him that?

Needless to say the film does improve somewhat when John C. Reilly enters into proceedings, which is a rather common occurrence where this actor is concerned – but his introduction does mark the beginning of a rather convoluted second act, and while sitting through a slow-burning opening, there is a distinct lack of focus later on, with a myriad of themes at play.