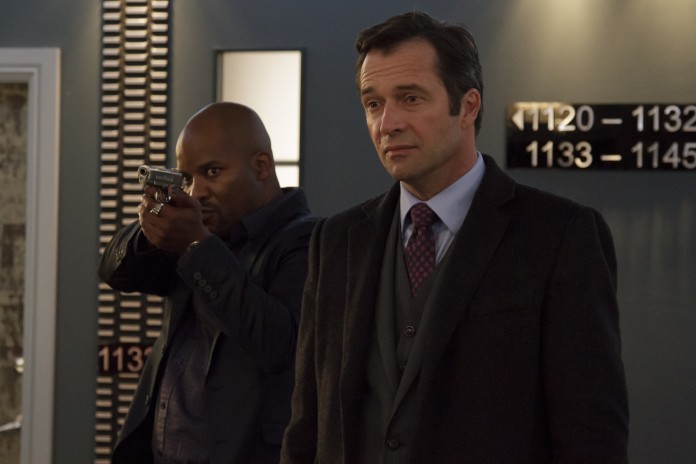 With the likes of standalone action thrillers such as Lucy and Everly, added to the popular franchises like The Hunger Games and the Divergent series, female-led action movies are becoming more of a regular occurrence – and the latest to add to the list is the Olga Kurylenko starring Momentum. However when speaking to her co-star, and leading antagonist of the piece, James Purefoy, the actor told us that he feels we’re a long way off reaching a point of equality, heavily criticising an industry he believes is ingrained with sexism.

“I was keen to be a part of a film where the action hero was a woman,” he explained. “It’s all of our responsibility to support, by being in, directing or producing, anything that levels the playing field. For an industry that is supposedly so liberal it still astonishes me how heavily sexist the industry is. So anything I can to help that move along is a good thing.”

“There has to be some disillusionment,” he continued. “Eight percent of big budget movies in Hollywood are directed by women, it’s ridiculous. Who is making the decisions not to hire these people? Clearly there are people with their hand firmly on the door keeping them out. If there’s only eight percent of blockbusters directed by women we have to ask why the f*** that is happening, and who is saying no to them?”

“I’ve worked with loads of female directors, but it’s always on art-house films, films that are stereotypically defined as ‘female driven films’ with ‘female themes and ideas’. Relationship movies, if you’re a woman you’re allowed to direct that – but unless you’re Kathryn Bigelow, you’re never going to direct a big Hollywood action movie. So what’s going on? Why is that happening? It’s rampant sexism right at the very top, allowing that to happen.”

“But it’s always implicit. It’s something that is done quietly, underhand. It’s much more subtle than it used to be, because you can get sued for it now, so it’s done with a nod and a wink.”

The actor feels passionately about the subject – to a point where, at times, he even takes on roles based on the strength of the female characters, not just the part he’d be playing.

“If part of the pitch to me is that it’s a female driven project, my ears are pricked. My attention is grabbed,” he said. “Of course it’s about the script and what else is going on in it, but it’s part of the war of equality. I have a very good actress friend who just turned down a big production down on Broadway because she wasn’t getting paid as much as her co-star and that’s what people have to do.”

In this instance, the role of the protagonist belongs to Kurylenko – whose character has obtained a drive that the corrupt US Senator (Morgan Freeman) is desperate to get his hands on. What transpires is a deadly game of cat and mouse as she locks horns with Purefoy’s Mr. Washington, the assassin tasked with cleaning up this mess and discarding of both the video and those in possession of it. The Ukrainian actresses’ very involvement was also part of the appeal to Purefoy.

“Olga is strong and assertive in real life and she knows what she’s doing and she preps really well. She arrives on set knowing her lines and believe you me, you’d be surprised how common it is working with people who don’t know their f*****g lines. It astonishes me. Every time it happens. Frankly they should be driven out of the business.”

Finally, Purefoy explained that his admiration for director Stephen Campanelli was a big factor in becoming attached to this project – having been a fan of Clint Eastwood’s cameraman ever since he was a child.

“I have been aware of Stephen because I grew up watching all of Clint Eastwood’s movies when everybody else was watching Star Wars,” he explained. “I was watching The Good, the Bad and the Ugly, and A Fistful of Dollars. He’s a brilliant camera operator and this film needed somebody who could really move a camera, and understand how action works – and he does. I think for a first movie as a director it’s pretty extraordinary.”

Though when we asked if Campanelli ever got frustrated undertaking a different task to usual, Purefoy said, “He would grab the camera off somebody if he felt like it wasn’t working – literally rip it out of the camera operator’s hands and do it himself if he felt that he wasn’t getting what he wanted.” Guess old habits do die hard.

Momentum is available on Blu-ray and DVD from 18th January, courtesy of Signature Entertainment. You can watch our interview with Olga Kurylenko here.