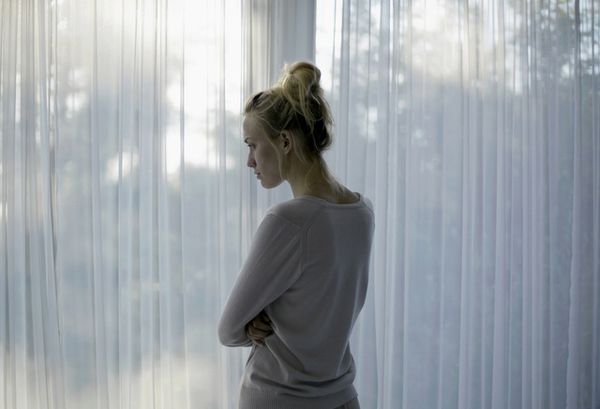 In the modern era of British austerity and the growing criticism of economic inequality, films of I, Daniel Blake’s ilk take a hard look at this socioeconomic plight, and pierce it harder through a documentary aesthetic. The Incident takes a much more human approach to victims of modern poverty and masks it as a middle-class saviour narrative.

An affluent couple each encounter a destitute teenager, both failing to help her, and instead partly takes advantage. Boyfriend Joe (Tom Hughes) is picking up a pizza from an independent takeaway joint where he is approached by the aforementioned teenager Lily (Tasha Connor). Lily prostitutes herself to Joe, teasing him to comply, as an easily-led Joe accepts such advances and pays for her services. Joe returns home with the stone-cold pizza to be coldly greeted by his girlfriend Annabel (Ruth Gedmintas). Annabel is none-the-wiser to Joe’s adulterous encounter mere hours prior. The two exchange cold pleasantries over wine and the stone-cold pizza.

Annabel’s first encounter with Lily is upon overhearing Lily’s solicitation for sex to significantly older men. Annabel does very little to intervene, and opts to judge from a distance. Eventually, Annabel comes face-to-face with Lily, who has decided to walk into Joe and Annabel’s home as Annabel is sleeping.

The synopsis above may read a little clunky, but so does the film. While one appreciates that rural England may be small, it’s inconceivable that these two would encounter the same young girl in a short space of time for wholly different reasons. This contrivance makes such viewing difficult to engage. Lily is indeed a sympathetic character, helped greatly by the vulnerable yet feisty performance from Tash Connor, one that deflects the abuse from the unsympathetic underclass chavs (yep, in 2016, this film has them) that snatch everything from her possessions to her dignity.

After Annabel comes to understand Lily, Annabel begins to charitably provide options for Lily. It isn’t the film’s lack of sincerity that undermines this narrative discourse, but it’s the aforementioned economic inequality. In depicting the middle-classes as flawed but fundamentally good characters, and the working/underclasses as villainous opportunists, with Joe slipping into such deplorable behaviour, the film creates them as the saviours of the underclasses. And in a time of such austerity, this is not the kind of message one wishes to take away.

Social commentary aside for a moment, matters are made worse with the film’s narrative pacing. Aside from the lack of chemistry between the two leads, aside from their arguments being given little forethought, aside from these arguments escalating much too quickly, and aside from awkward reactions from Joe and Annabel, the film’s editing is missing chunks of narrative cohesion. The editorial team appear to have opted for cuts to black as oppose to seamless editing between set locations – those final 45 minutes will exhaust even the most patient of viewers.

The Incident is a sincerely told story but there is an overbearing naivety with its own subject matter. With stilted dialogue and performances, though Connor portrays a sympathetic Lily, this film greatly misses the mark.

Lucas Till, Cedric The Entertainer, Lex Scott Davis & more on the importance of Son of the South