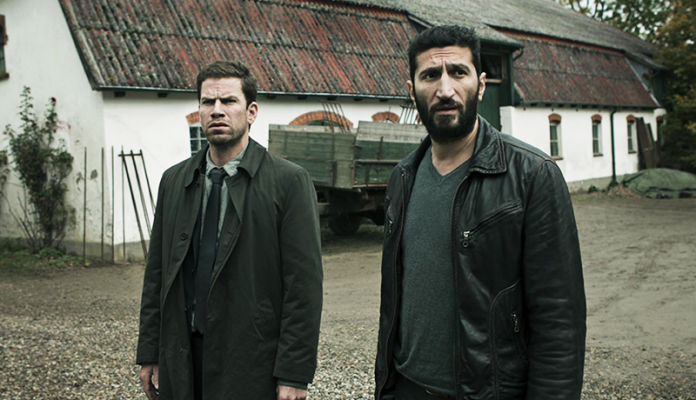 Dark, disturbing and delightfully intriguing, even if it is for all the wrong reasons, your eyes stay firmly glued to the screen in Danish thriller The Absent One. This compelling sequel makes for a nail biting murder mystery that skilfully presents a relatively clichéd story that we have all seen countless times before in a unique manner. Reminiscent of TV series such as The Killing, The Bridge and the recent 100 Code, one can’t help feel that this and indeed the entire works could have made a sharp and slick three or four part series.

The second in a trilogy first penned by Danish novelist Jussi Adler-Olsen, this feels very much like a stand-alone film. Having little or virtually no knowledge of the characters or first instalment is unlikely to hinder your experience, as you become engrossed by this gritty narrative. After the suicide of an ex police officer, agents Carl Morck (Nikolaj Lie Kaas) and Assad (Fares Fares) get stuck into a case that was put to rest some 20 years ago. Despite a stack of 50 unsolved cases, a new assistant and an adopted cat, nothing will stop Morck until he figures out exactly what happened to murdered twins Thomas and Marie.

Emotions run high and blood curdles as we see outright cruel behaviour actioned by privileged boarding school teenagers that think they can get away with anything because Daddy will invariably bail them out. Perhaps a tad stereotypical when it comes to bored, hormonal teenagers, but such aspects are as hard hitting as ever. As we see a young Kimmie (Sarah-Sofie Boussnina) being utterly taken with Ditlev (Pilou Asbaek), when they start terrorising poor Thomas and Marie, actions have to conceal their identity which was the wakeup call Kimmie needed to away from these people. Although, as her conscience gets the better of her, Ditlev sees to her never having a happy moment again, which results in her living on the streets, turning into a feral, fragile creature prone to hallucinations – some of which offer a spine-tingling scare factor, as adrenaline runs high.

The recent BBC drama Stag gave Asbaek a solid role to chew on, yet here we truly see how versatile he is, giving a chilling performance as the heartless Ditlev. Lie Kaas and Fares are electric as this crime fighting pair and Sarah-Sofie Boussnina has just the right amount of nastiness and kindness in her teenage Kimmie. At times you almost feel as if she has everything coming to her, only to feel a pang of guilt as you witness just how primal the others treat her.  Taking into consideration that she still deeply cares for the man who hurt her makes this all the more heartbreaking.

After viewing The Absent One, it is near impossible to fight the urge to seek out the first chapter from Department Q; The Keeper of Lost Causes and indeed track down copies of the books to stick your nose in before the final entry into the franchise; A Conspiracy of Faith. Interestingly, they have taken a step away from current director Norgaard and replaced him with the man behind The Order of Disappearance, Hans Petter Moland. Undeniably safe hands of course, but let’s hope the darkness creeps through just as prominently as it does here.