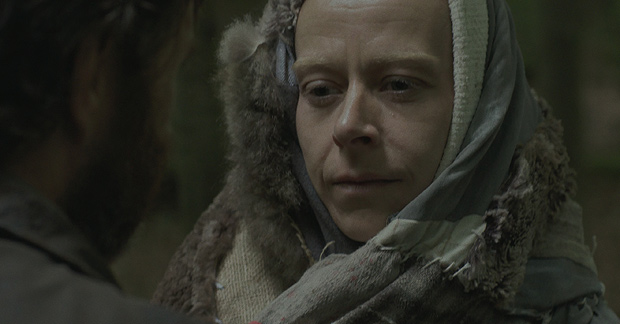 In a film career that is currently celebrating its ten year anniversary, Scottish actress Kate Dickie has proved herself to be quite the chameleon: capable of flitting from one diverse role to the next with a graceful and impressive ease.

From low-budget cinematic beginnings, she has since dipped into such mega money behemoths as Prometheus whilst continuing to champion young British talent. Currently riding a wave of praise for her appearance in the haunting movie The Witch, she can also now be seen in the stark and hard-hitting Couple in a Hole; playing a grief-stricken woman who lives like a savage in the woods alongside her husband after they have suffered the trauma of losing a child.

Greg Wetherall sat down with Kate to discuss her role in this unusual film, in addition to a discussion about her career generally; from Game of Thrones to her debut in Andrea Arnold’s Red Road.

You soul is exposed in Couple in a Hole.

That must have been quite draining?

It was. It was a draining movie, but I really enjoyed working on it. It was such an interesting script and character to play. It was not an easy role to play, but the kind of stuff that I really enjoy, so I feel really lucky to get something that’s quite demanding. She’s so stripped bare. She is very animalistic. There aren’t many of those social norms that you have as a human being.

She’s quite selfish in her grief as well. She’s so blinkered that it’s John, her husband, who has all the hard life. She’s so pure and focused, whereas he’s trying to get out of the hole, he’s wanting contact with a lot of things and her world is so tiny now. It’s sad.

Does it make it for you? I mean, I can imagine that your instinct is to steer the character a certain way because you don’t understand her behaviour?

She’s quite happy, as happy as she can be, in that hole. That’s all she wants. She’d die there if she could. I’ve not played a character like her before, who is so removed from society that has no interest in re-joining ever again. Karen would have lived there forever. She didn’t understand how he (her husband, John) can even think of leaving. It doesn’t make sense to her. She doesn’t understand how he can contemplate a life going on or a lifestyle. Home is where they are. That’s what she feels.

Karen is very gaunt. How do you go about preparing for a character such as this?

Well, we stopped eating. We worked on our nutrition. We had to get as skinny as we could. We had to look like we were living in that cave. We started with a nutritionist and we ended up (doing it) for about 5 months. Paul (Higgins, co-star) broke his leg 4 days into the shoot, so the shoot stopped for 2 months and then he recovered and came back.

That must have really affected the nutrition side of things?

Yes, because we were supposed to be like that for 5 weeks, but that turned into 5 months, because I went off and did another movie, The Witch, involving a family that were starving and that, so I just kept it going.

A lot of the time with characters, I start it all up here (points to her head), but with Karen, I started with that problem that she has with the walking and the physical thing of being outside, because I thought it had such a big impact on her. It was more physical than it normally would be with me.

If you’ve lost anyone, you understand that feeling of thinking that life should stop. Why the fuck is the world continuing on outside my window when this travesty has happened. I remember that’s what I felt like when my parents (died); everyone should stop and acknowledge this, and actually, nobody was, and I couldn’t get over that. That, I really understood for Karen, and then I thought, ‘what would it be like if you’d lost a child?’ I felt it was kinda easy, in a way, because Tom’s (Tom Geens, writer/director) script was so good and my journey was so pure and simple. She was very childlike and took no responsibility for anything. It was refreshing playing someone as empty as that or, well, who lived as simply as that.

You tend to champion a lot of British cinema. You’ve recently been in Catch Me Daddy (2014), of course, but I was really struck by your turn in For Those In Peril (2013), and particularly by the scene where you sing Roberta Flack’s ‘The First Time, Ever I Saw Your Face’…

God that song brought me out in hives… because I don’t sing! We did that scene for a good few hours. I was so nervous. I had been practicing and practicing, and she wasn’t meant to be the best singer. The fear I got came alive when we started getting these earpieces. I said, ‘what are these for?’ and he (Tom) said, ‘oh, you know that you’ll hear the music but no one else will’. I said, (gasps), ‘what? I can’t!’ Anyway, we did it for about 4 hours. I was a mess by the end; I was so wrung out.

I loved doing that movie! There’s something about it. It’s just very honest. And I think Paul Wright is a really fascinating writer/director.

This goes back to my comment of you championing British talent, because, of course, there was also your work with Andrea Arnold on Red Road (2006).

She’s amazing. My first movie. It was also hers. Well, she’d had the short Wasp, but that (Red Road) was her first feature and both of our journeys started there. She taught me so much. I didn’t have a bloody idea what I was doing in that movie, because I had come out of the theatre. I’d done some TV and done a couple of shorts, but I didn’t really have a clue.

She is the most down to earth person and really real. She writes all of her stuff. I just felt in really good hands. I didn’t mind doing anything in that movie. I love her movies.

Is there any chance that you’ll work together again? Have you spoken about it?

I don’t think we will. We’ve stayed friends, but I think there’s too many other amazing and interesting people that she’d probably want to work with, but what I do love is watching what she makes, like Fish Tank. I love her stuff. She just seems to understand people. You know, her dialogue. Nothing’s there that shouldn’t be.

It’s so different. I get recognised so much from Game of Thrones and it always surprises me because I wasn’t in it a lot. But my character… I guess she was very memorable because she was so disturbed. I had such a good time working on it. Again, although it’s on a very big scale, it didn’t feel intimidating. It was intimate, with a lovely cast and crew. I didn’t realise at the time how big it would be. I just thought, ‘HBO. Oh my god!’ you know? I was so excited about it. At the point we started filming it, fantasy and stuff was quite a niche. And I think Game of Thrones has just pushed it out and people are really open to it now. The audience ranges from young to old.

Would you ever worry about being recognised so heavily for that role over and above all of your other work?

No, because she was a really interesting character to play. She was so disturbed. She had been so damaged by her past. Although it was on a big scale, I really enjoyed working on her. I don’t mind. It’s odd to be recognised for something that I wasn’t in a lot, but I was sad to say ‘cheerio’ to Lysa, because she was so unlikeable. And that’s the kind of thing that interests me. Why is someone so unlikeable? What’s made them that person? And then you look at someone’s past and you go ‘ahh’, so I find it really fascinating how people end up.

Your reference to that appeal chimes in with what you stated you liked about Couple In A Hole. Have you always been interested in the psyche in that way? Or do you feel that you’ve changed over time and headed more in that direction?

I’ve always been interested in characters that are either on the periphery or are acting in ways that you don’t understand, because I am fascinated in what makes people who they are. If you meet someone in life who is really unlikeable, it’s often because they’re really insecure or unhappy or something. There’s something there that explains it and I’m just fascinated by what that is.

I’m a light person in real life, but I struggle with light characters, because I don’t know what to do. I feel like I want to give a voice to people who others might not be interested in or shove to the side.

As you spend the time exploring those types of personalities and characters, do you come away from a project feeling more enriched?

Yes, definitely, because we’re all so judgemental in life. As an actor, because you’ve got to break these people down to play them truthfully, so you can have motivations. You realise that we’re all just trying to make our way in the world the best that we can. Everyone has different pasts that affect the way that they react to things.

(In a Couple in a Hole) Karen is a lost soul, but John more so. She’s where she wants to be. That’s as much as she wants. Whereas he wants to get back to life, he wants to feel things and have conversations. She’s set her own borders. When he even suggests that she leave it, she cannot understand how he could want to have a life. Everything is black and white with Karen, like a child, whereas he’s an adult making all the decisions.

That’s something that Tom really wanted with her. He didn’t want her really angry. He wanted her almost childlike and for things to be very simple for her. Tom took me on an interesting road with her, basically.

Couple in a Hole is in cinemas from 8 April 2016. You can read our review here.