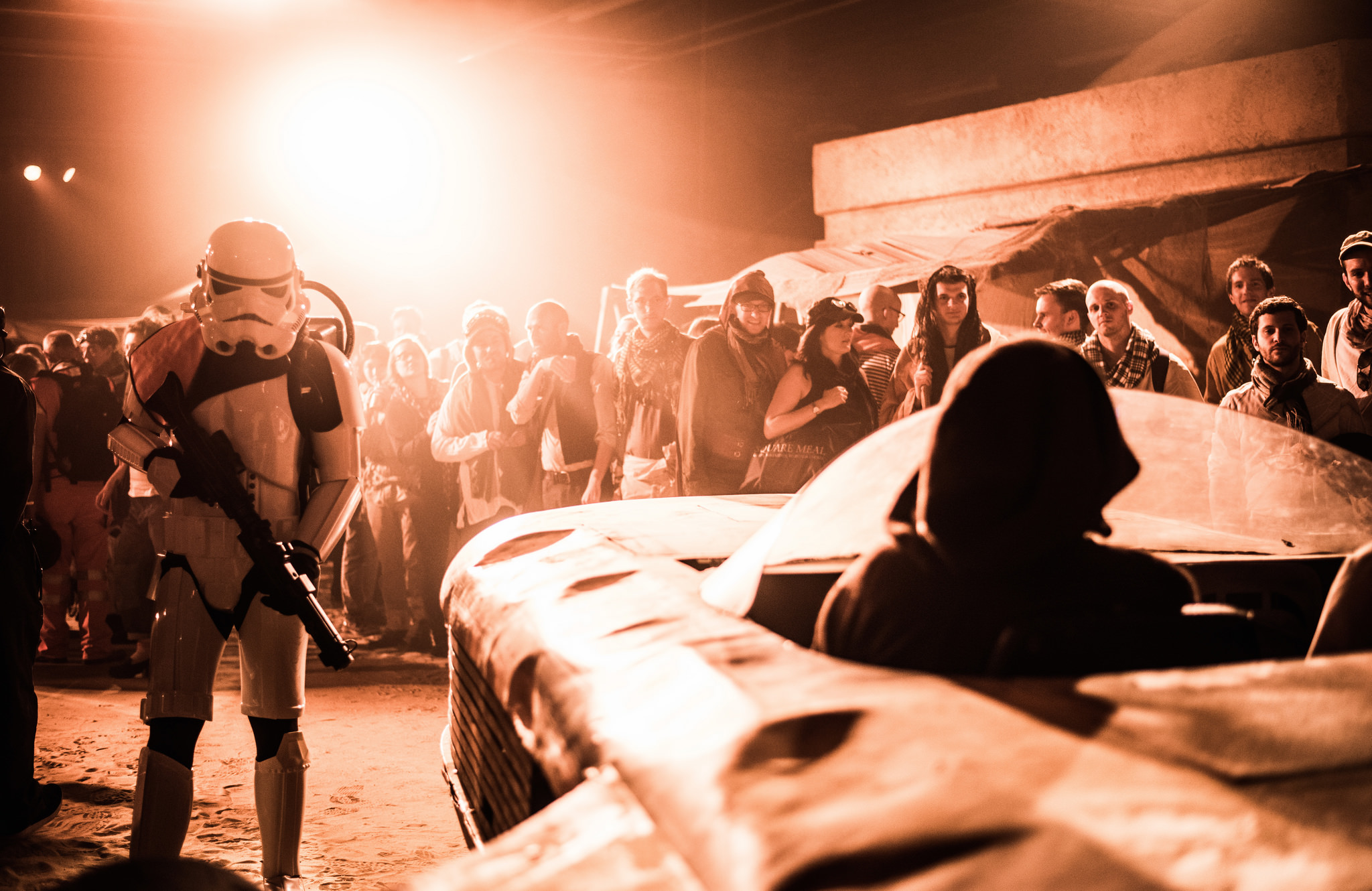 Secret Cinema is fast becoming the place for film lovers on the hunt for an immersive, flesh and blood fix of their most cherished movies. This time around the company have displayed a canny choice in programming as Star Wars fever is pretty much at an all-time high, owing to the release in December of the next chapter in that almost forty year saga.

Again, the world-building here is close in scope and ambition to that of the recreation of 50’s small town Americana for their interpretation of Back to the Future which wowed a substantial audience last year, despite the initial setbacks. Secret Cinema has taken things to a galaxy far, far away with mostly striking results, although that’s not to say the evenings doesn’t come up against a couple of stray asteroids before hitting hyper speed.

Annoyingly, the audience participation during the preamble feels a little cheap, forced and ill thought-through. There’s much better ways of achieving a captivating experience without being required to crouch down and scraper around to avoid an unseen ‘enemy’. Fortunately, the effort which has gone into realising Lucas’ alien worlds is apparent and very impressive upon entered the main function space, so why the organisers insist on doing half-hearted play-acting is a little mystifying.

Other than a gaggle of Tweens decked out in Jedi robes excitedly scurrying around, the majority of visitors were older fans still in the thralls of nostalgia and regular Londoners with cash to spare and looking for a fun evening – both groups looking decidedly bemused by what was being asked of them during this section.

It isn’t long before the fun begins, however, and once you arrive at the film’s two major locations there’s been a fair amount of care taken to ensure both fan service is paid and attention to detail is delivered. Even the food outlets are imaginatively factored into the setting, with stalls peddling the likes of shawarma wraps and falafel meals blending inconspicuously within the desert setting.

Given the pre-screening re-enactments of iconic locations from A New Hope, some may query why it’s that film’s follow-up which has been honoured with a screening. Rest assured Secret Cinema know their audience, and by pulling from the first two and most highly regarded from the series, they’re able to fully meet the expectation of fans.

The larger set-pieces and surprises deserve to be kept under wraps and spoiler-free, but it’s actually some of the smaller moments which deliver the requisite magic, be it waving off an attempted pick-pocketing by a cheeky Jawa, the genuine cries of indignation from onlookers as the Mos Eisley Cantina band are unceremoniously escorted off stage mid-song by a couple of Storm Troopers, or witnessing Han and Chewie at that same establishment, sitting down to broker their deal with Obi Wan next to a couple of unsuspecting bar patrons.

Those fun, unforced incidents are really the key to breathing life and a bringing a playful sense of fun to the night.

The second leg of the evening takes a darker but no less exciting turn. Without revealing too much, suffice to say that you’re never far from the hands of the Empire in the next location, and this the where Secret Cinema have really used the huge space to their advantage, adding the mammoth three-screen (seated) cinema, where the customary, half-inebriated audience participation really highlights what makes these kind of events so enjoyable.

While it doesn’t quite reach the heady heights of Hill Valley (a high benchmark for the company, and one which will be hard to top) this is yet another success for Secret Cinema and is very much a force to be reckoned with. It will certainly leave you grinning from ear to ear upon exiting, even if you have to raid Lando Calrissian’s gambling winnings to fund your evening.

Win Back to the Future: The Ultimate Trilogy on 4K Ultra HD

Exclusive: Jake Ryan & John Tui on Savage + experiences on set of Star Wars and The Hobbit