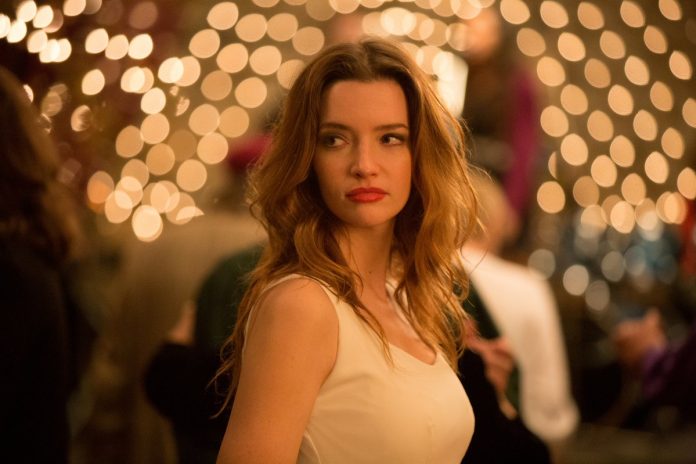 Talulah Riley, best know to many for her smaller, supporting role in Christopher Nolan’s Inception (or from St. Trinian’s 2), dives behind both the laptop and the camera here as she makes her debut as writer/director with Scottish Mussel, as well as playing one of the film’s leads. The film, which was an idea she picked up from her father, debuted at last year’s Edinburgh Film Festival and is finally swimming onto UK shores.

Riley plays Beth, a local conservationist doing her bit up in the Scottish Highlands to help keep local gangsters away from draining the local reserves of the fresh water molluscs down at the bottom of the beautiful briny sea. In the aforementioned marine animals are precious (and lucrative) pearls which can go for fortunes when sold to the right people, but Beth and her team are struggling to keep the waters safe.

In one such spot, Beth and her partner are shot at by some local poachers eager to get their dastardly mitts on the local molluscs. They manage to fend them off but it’s here that she first meets Ritchie (Martin Compston), a local man down on his luck and with not much purpose in life other than sitting in the local pub with his mates Fraser (Paul Britannia) and Danny (The Inbetweeners’ Joe Thomas). Seeing a gap in the market to make some quick money, he ends up volunteering to get closer to the prized assets but its Beth who he unexpectedly gets closest too and soon enough sparks fly.

While her intentions are undoubtedly in the right place, Riley’s debut is one of those ill-conceived efforts that will soon find itself lining many bargain bins up and down the country. It’s with a heavy heart we say this, as all the intentions of making a funny, cute and enjoyable romp in the Scottish wildlife are there but the truth is that this rom-com is lazy and unexciting both in it’s story and its direction. It’s not a complete train-wreck a la Dirty Grandpa, but it’s incredibly bland, which is perhaps even more of a sin.

Compston, one of Britain’s most interesting actors right now, is the bright spark here but even his substantial talents are wrestled to the ground by the predictable, by-the-numbers plotting. Riley is a perfectly capable actress and holds the screen well but she too is let down by her own lifeless script, and while there are a few glimpses of romance and some half-hearted chuckles, both are in extremely short supply throughout. Then there’s some ill-conceived cameos from the likes of Harry Enfield, Russell Kane and Rufus Hound that border on embarrassing.

While there are certainly much poorer films that have done the rounds this year, Scottish Mussel is an unimaginative rom-com that lacks any spark, and while writer/director Riley’s intentions are noble and she makes a good on-screen couple with Compston, it’s not quite enough to save this underwhelming production.