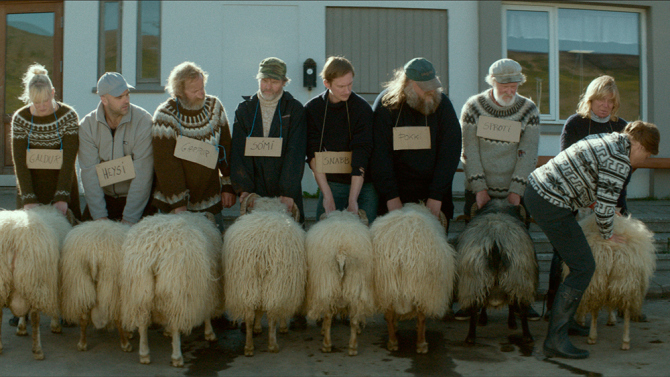 The winner of the prestigious Un Certain Regard award at Cannes Film Festival – and Iceland’s first recipient of it – Grimur Hakonarson’s Rams is about as subtle a comedy as you’ll witness this year. There is a host of laughs to be had during this endearingly absurd endeavour, but at the same there’s an air of desolation, something almost melancholic – and it’s this very contrast that makes for an amiable, if frustratingly undemanding piece of cinema.

Though living just a mere stone’s throw away from one another, two brothers – and fellow sheep farmers – have not exchanged words in over 40 years. Living remotely in a farming valley, they have an unspoken, yet savage competitive nature, epitomised in when Kiddi (Theodor Juliusson) wins the prize for best ram, and Gummi (Sigurdur Sigurjonsson) settles, in a somewhat undignified fashion, for second place. But when he discovers that the award winning sheep has a rare, and fatal disease, while revelling in his rival sibling’s misfortune, it dawns on him that this contagious infection is likely to spread amongst the entire community, and they could both lose their entire flock. Given their unadulterated, ineffable passion and love for their craft, it’s not only the sheep who face extinction.

The comedy derives from the deadpan approach to their profession and commitment to their sheep, as we take joy from their sony-faced approach, and just how seriously they take it all, the enthusiasm they put in and the significance placed upon this annual award, which does nothing but heighten the rivalry between them. But Hakonarson ensures that he merely highlights the quirkiness of the protagonists in a way that is never spiteful or barbed, but always affectionate. He is not laughing at them, nor are we, we’re appreciating them.

The film is a little one note however, and while the premise holds much promise, the tone is almost too consistent, placid and linear, and Hakonarson struggles to transcend being labelled as merely a light comedy-drama, rarely taking the audience any deeper. So while hilarious in parts and undoubtedly touching in others, the unfulfilling and tedious middle act remains a jarring, unavoidable issue.