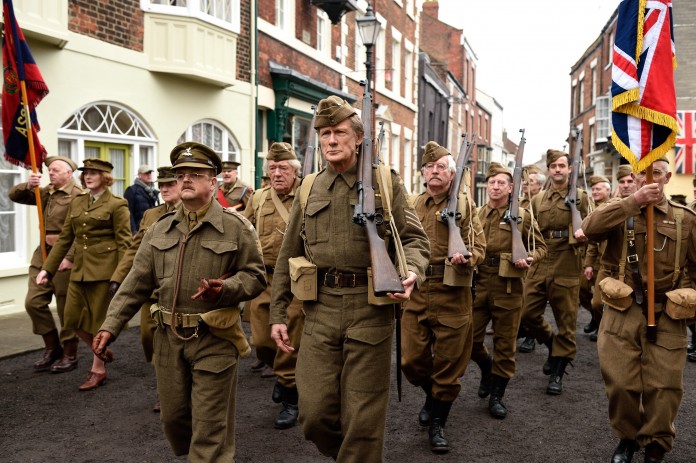 Similarly to the national anthem, not many people would be able to confidently recite the second verse to the theme tune for Dad’s Army. We can all sing along to the opening line of, “Who do you think you are kidding Mr. Hitler…” but after that it’s anyone’s guess. But there’s a reason for that – and it’s because many of won’t watch on past this indelible title sequence, for Dad’s Army, though a staple of British television and key component in so many of our childhoods, serving as a constant background on many a lazy Sunday afternoon – it’s fair to say the show has dated somewhat, without that same sense of timelessness that comes with the likes of Fawlty Towers. It’s treasured, and cherished, certainly – but without any real market in a modern society, which does raise questions over the validity of this cinematic endeavour, and after having seen the picture, such questions will be even harder to find an answer for.

Taking place in the familiar, fictional seaside setting of Walmington-on-Sea, we meet the Home Guard platoon, led by the meticulous Captain Mainwaring (Toby Jones) and his sincere assistant, Sergeant Wilson (Bill Nighy). Providing support and a role for elderly citizens such as Private Godfrey (Michael Gambon) and Lance Corporal Jones (Tom Courtney) – as well as the younger Pike (Blake Harrison), this clumsy, mismatched collective are to become the focus of an article for roving reporter Rose Winters (Catherine Zeta-Jones), who wants to highlight this group’s compassion and steely determination in helping their country through the Second World War. As the men vie tirelessly to claim her affection, annoying their loyal, if disgruntled wives in the process – they become sidetracked when learning that a German spy is amongst them.

There is no denying that Oliver Parker’s Dad’s Army captures that same essence and tone as the television series, so from that perspective it’s a job well done. But isn’t the intention to bring this franchise to a new crowd? Perhaps veering away from traditionalism and expanding upon this universe may have been more beneficial, to give it a pertinent sense of satire – but instead Parker abides, albeit affectionately, to convention. Conversely, there is something endearingly romantic and charming about the old-fashioned nature, and Parker thrives in such a capacity, even shooting Zeta Jones in a soft focus, like a archetypal femme fatale of classic Hollywood cinema.

It’s the other Jones, however, who completely steals the show, as our favourite Toby turns in a nuanced display, and one that is far more subtle and empathetic than the screenplay deserves. In what is a distinctly undemanding watch, he gives a performance that demands our attention. Gambon and Courtenay also impress, while Harrison effectively revisits his role as Neil from The Inbetweeners as the blissfully clueless Pike.

Much like Pike, Dad’s Army has a lot of heart, and is certainly an amiable piece, but being uncynical is not enough to justify a trip to the cinema, as a film that offers little by way of jokes, or substantial narrative purpose. That said, it’s bound to make for a pleasant Sunday afternoon viewing with the folks. Which, coincidentally, is exactly when Dad’s Army always seems to be on the telly. Might just be better off staying in, then.