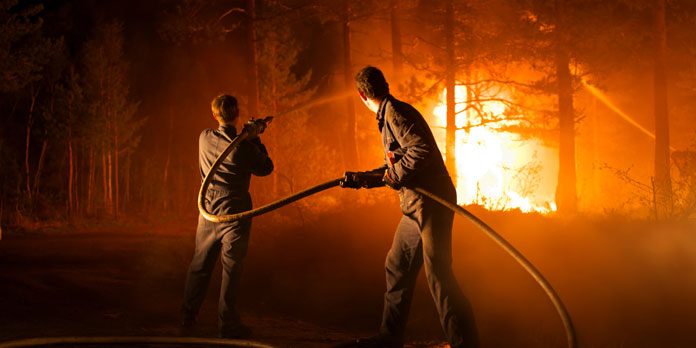 The fascination with fire is centuries old. Insomnia (1997) director Erik Skjoldbjærg’s latest film, Pyromaniac (Pyromanen), examines this from a Scandinavian perspective set in rural Norway while simultaneously attempting to question the supposed idyll of such a lifestyle the rest of us secretly covet.

It is clear from Gösta Reiland’s cinematography near the start that the filmmakers embark on establishing this fairy-tale scenario of stunning forest vistas and remote homes (crackling log fires spring to mind), as we follow our lead Dag (a boyish-looking Trond Nilssen) along the windy roads.

Based on a true story, the time in the late Seventies in a southern village of Norway called Finsland, where 19-year-old Dag has returned from military service to live with his parents, fire chef Ingemann (Per Frisch) and mother Alma (Liv Bernhoft Osa). All Dag wants is a purpose in life – and a job, though he is called on to help the fire service. Outbreaks of fire are on the increase, and sightings of a ruthless pyromaniac spark local fears. Attacks on non-residents/visitors grow as paranoia reigns. Who is the mystery fire-starter and how can they catch them before there is a fatality?

There is an understated beauty to Skjoldbjærg’s work, like a throwback to an Ivar Johansson film, but toned right down on melodrama. The most dramatic thing is the raging fires themselves that seem quite out of place. In fact, young Dag is taciturn, a pleasant-looking mystery himself. We never quite understand what his motivation is as Skjoldbjærg keeps us guessing at a whole number of possibilities, some of which are apparent, like attending fires from an early age with dad has fuel the fascination, or Dag trying to keep business alight (pardon the pun) to give him something to do.

There is the inference that Dag is an oddball loner who was studious at school. Indeed one breakthrough scene into his psyche comes with an impromptu outing with two old school acquaintances, where Dag is left dangling (literally) by them and Reiland’s lens captures the build-up of suppressed rage in the teen’s face. However, this seems too easy and there is still no satisfactory explanation, short of being stood up by the popular girls. Another clue into Dag’s detachment from society (and mental health) is his slightly stalker-ish interaction with fellow firefighter’s wife Elsa (Agnes Kittelsen). There is an immature need to please all around him that results in him being made a laughing stock by the small community.

Skjoldbjærg casts well here, with Nilssen’s boy-band good looks masking a turbulent side behind his angelic façade, and Bernhoft Osa’s compelling presence as Alma, even when she is doing very little but having her initial doubts about her son’s excursions. Sometimes things feel too understated to the point of repetition, though we are always won around again by another picture-postcard view. Like a regional secret though, the lid is still kept firmly on as to what drives the average Scandinavian to go loopy in such a desirable existence, further masking the protagonist’s actual motives – perhaps Skjoldbjærg doesn’t have a clue either.

Pyromaniac will feed the Scandi film fan’s fascination with that region’s compelling cinema, though it might miss being taken up internationally at the box office, short of the film festival circuit (it last featured at Toronto). Still, there is enough contrast of beauty and ugliness at play in blissful surroundings to tempt – plus the awe of seeing scorching orange flame against the greenery in Reiland’s indelible cinematography.