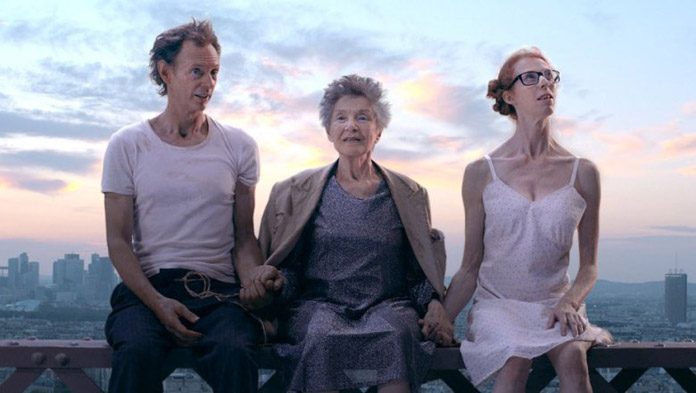 Those who have seen a Fiona Gordon and Dominique Abel film will never forget their first time. From Rumba (2008) to The Fairy (2011), the duo’s romantic comedies are like no other currently out there, each exquisitely choreographed real-life fairy-tales about ‘real’ characters, the little people without a voice who get overlooked as life rushes by.

It’s these qualities that resonate and make the duo’s theatrically-staged films (favouring static wide angles) such a visual pleasure as they mock the rest of us for missing out on the finer detail. They also discover beauty in awkwardness and relish the inconsequential. Lost in Paris, the latest offering, is no exception.

Gordon again plays her namesake, Fiona, this time a Canadian who lives in a remote snowy outback. She receives a letter all the way from Paris from her elderly Aunt Martha (played by Emmanuelle Riva) asking for help. Fiona travels to France but finds Martha missing from her apartment. So begins her mystery and catalogue of catastrophe that involves Dom (Abel), a flamboyant and amorous homeless man who recovers Fiona’s lost rucksack and falls for her.

There is a certain retro-fifties Hollywood essence to the Gordon and Abel tales, the very idea that romance and goodwill triumph, though with it comes hardship for the characters along the way. Both are excellent at their craft, though this time there is greater dialogue and a mainstream feel to the project. Gordon is such a naturally expressive character actress – and anti-mainstream in look – that you are utterly compelled to examine her every move and grimace. She also has far more to do in this story, what with Abel more her comic, clowning sidekick than her equal, as in the previous films.

The settings are real Parisian backdrops – unlike The Fairy, for example. It’s as though both have been taken out of their comfort zone of contained and often colour-saturated sets and made to perform in an authentic and grittier environment. It works to a point, and there is a wonderful boat dance scene that sums up their exceptional talent to newcomers. However, doing this also tampers with the very magic of their films that fans enjoy – being transported to a parallel, timeless universe, and merely becomes something resembling yet another Parisian-based farce as they seek out Martha. The characters might be too precious for the real world.

Abel is actually (surprisingly) more at home in such a backdrop, immensely charming as goofy bum Gordon, and acting without a real care in the world. Fiona gives him adventure and hope – hence, the fairy-tale element. Riva is also very funny as eccentric Martha who scurries around the Parisian streets trying to hide from the authorities who (she believes) want to section her.

Lost in Paris is a brave new world to place the Fiona and Dom characters and one that Gordon and Abel needed to take their iconic characters to. The very fact they explore mundanity with dance and innocent expression in their work always breathes a refreshing and unique lease of life into the box office, while still giving nods to the alluring power of silent-film acting in moments. However, whether fans will like the reality of the new project, only time will tell. It does open up lots of other possibilities though.

Scott Davis - Feb 7, 2023 0
To celebrate the release of the new romantic comedy Somebody...