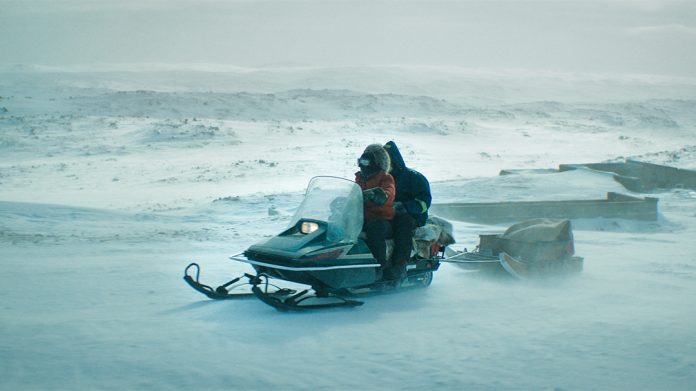 Kim Nguyen’s Two Lovers and a Bear is no ordinary love story. The film unfolds in the remote, snowbound Canadian province of Nunavut, involves an array of surreal encounters with a polar bear and features a nerve-shredding, nightmarish sequence in an abandoned bunker. Not exactly your typical boy meets girl then – but the film’s unique setting and tonal surprises helps create a refreshingly unpredictable atmosphere.

The two lovers in question are Roman (Dane DeHaan) and Lucy (Tatiana Maslany), a pair of damaged twentysomethings who are both haunted by the memories of their fathers. The couple find solace in each other’s company and in the refuge their isolated town provides. But their relationship is plunged into uncertainty when Lucy receives an acceptation letter to a biology degree that requires her to move “down south”, a place which Roman refuses to return to. When Roman suffers an alcohol-fuelled breakdown, Lucy goes to great measures to visit him in rehab and the pair reconcile. In a bid to reconnect with each other and escape their personal demons the pair set off on snowmobiles for an adventure into the snowy expanses of Nunavut. But things begin to spiral out of control when a large snowstorm forces the pair to take shelter inside a desolate bunker and Lucy begins to receive scary visions of her long-dead father.

The effectiveness of Two Lovers and a Bear rests heavily on DeHaan and Maslany’s shoulders, the film lives or dies on the believability of their characters and their relationship. Both actors overwhelmingly deliver with a pair of emotionally-charged, complex turns. The deep sadness and connection the duo share is empathetically conveyed by their expressive faces and bodies. This palpable chemistry is enlivened by a series of light-hearted exchanges between them (one involving the telling of a terrible joke is a highlight) which are charmingly endearing and sweetly realised. There’s a real rawness and intimacy to the couple’s sex scenes too, which adds another layer of authenticity to their volatile relationship.

While the plot beats of the first half are rather familiar, once the pair set off on their snowmobiles all bets are off. Nguyen composes a series of captivating, tonally-diverse sequences which keep events thrillingly unpredictable. The resolution of a nail-biting survival situation is triumphantly scored against The White Stripes’ Seven Nation Army, while a recurring run-in with a polar bear generates humour in the most unexpected of ways. When Lucy has a panic attack inside an abandoned bunker, Two Lovers and a Bear even threatens to morph into a horror film as Nguyen stokes our anxieties and irrational fears. Jesse Zubot’s unsettling, adeptly varied score smoothly facilitates these changes in tone.

The film’s final image is a poignant, beautiful and completely fitting end to the couple’s tale. In Two Lovers and a Bear, Nguyen has crafted a surprising, touching and deeply resonant love story.

“You have so much more to learn” – SDCC Trailer drops for ‘She-Hulk: Attorney At Law’