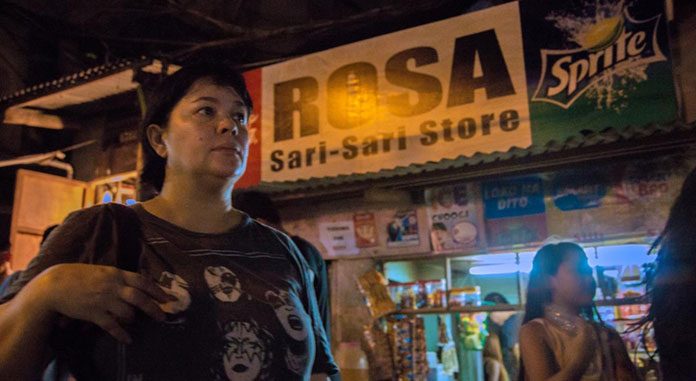 Filipino director Brillante Mendoza places us right in the heart of the hustle and bustle of the dusty or rain-swept streets of a poor district in Manila, the capital and second most populous city of the Philippines. His new film Ma’ Rosa is an immersive cinematic experience, using remarkably intrusive close-up camerawork to present this narrative.

The Thy Womb director’s latest offering follows protagonist Ma’ Rosa (Jaclyn Rose), the tough matriarch of a family of six – including husband Nestor (Julio Diaz) and four kids – who lives day by day in an environment where everyone knows your business, running a local convenience store. She also deals in a small amount of ‘ice’ (crystal meth) with Nestor to make ends meet, which has earned her a false sense of respect. One evening before the family sit down to dinner, they get raided by police after being set up. Rosa and her family try everything to make bail and get released.

Mendoza is fast becoming quite an auteur at Filipino films focused on local family and societal issues, creating a rich archive of non-documentary content that’s fascinating to watch. Simultaneously, the films resonate with a wider audience because of this. It’s this feeling of familiarity that guides us in gently at the start, though only short-lived as it’s coupled with a foreboding sense. Ma’ Rosa simmers with tension from the moment the character leaves the bus with her shopping in the rain. The claustrophobic urban environment only goes to heighten this, without any dramatic addition like music or snappy editing. It is all very natural, letting events unfold in real-time to lead to the inevitable downfall.

Something as ordinary as walking out the back of the police station, following each character in turn is nail-biting, expertly timed and repeated to tease the already awkward situation. Even amongst the ugliness that unfolds, Mendoza finds natural humour at the absurdity within the law in his country. There is nothing new about corrupt cops in films, but getting bail money to pay for chicken dinners while their captives, Rosa and Nestor, struggle to remain invisible to a third party, triggers the darkest of comedy moments at times. Again, the ordinary is rendered extraordinary in Mendoza’s work. There is an edgy quality that comes to a head at times then disperses just as quickly, as menacing as it is farcical.

The understated acting from Rose and cast keeps events grounded and very realistic – like watching a documentary unfold rather than a fiction. Rose commands our attention without demanding it, even at her most pathetic. Their morality is called into question to raise the money. You condone their actions as equally as you understand the need to keep the family together at any cost. Some of these means are again rendered almost commonplace in this film, even though they are repulsive to the viewer. Our faith is in Mendoza to portray believable events as he guides us through Manila’s underbelly life.

One of the most poignant and underplayed scenes is at the very end, involving Rosa, especially for any parent. It acts as a sharp nudge in the proverbial ribs, so to speak, at what is at stake. Although greed plays a big part throughout, Mendoza’s parting shot plays to compensate that. Ma’ Rosa is a compelling lesson in modern-day morality, but it cleverly never judges any of its characters in the process.