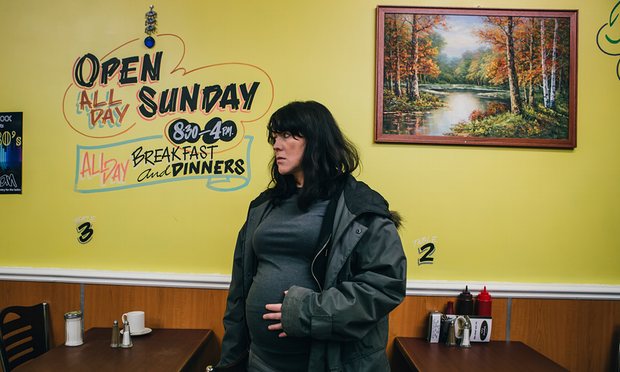 Lowe stars as Ruth, a young pregnant woman who’s out for revenge after her husband fell to his death in a group climbing accident. Ruth holds the other climbers accountable and has become bitter and twisted over the injustice of the incident. This is where things start to get weird; Ruth’s unborn foetus starts to talk to her and is hungry for redemption. Egged on by her homicidal baby, Ruth embarks on a violent killing spree. But as the birth-date beckons, Ruth becomes increasingly unstable and begins to question everything in her life.

Ruth’s victims are a mixed bunch and several of them are plainly detestable, like a misogynistic DJ and a deviant pet-shop owner, but others seem perfectly friendly and don’t seem to be implicated in her tragic loss. Regardless of this, each victim is dispatched in a strikingly gory, cynical fashion, leaving no doubt that Ruth is a deranged individual. As well as shocking audiences on a surface level, Prevenge utilises the blunt honesty of Ruth’s character to wittily satirise the mollycoddle rhetoric surrounding pregnancy in the modern age.

Lowe delivers a fantastically unpredictable, layered performance of scintillating comedic timing, empathic vulnerability and palpable rage. The obscene exchanges between herself and her sociopathic baby are laugh out loud funny as well as refreshingly uncompromising, there’s no restraints on the darkness of the material. Lowe’s chemistry with the supporting cast is just as entertaining and the cast’s lively, energetic connection makes each supporting character memorable despite their short-lived screen-time.

Prevenge’s only negatives are a slightly repetitive plot and the adoption of a more serious stance in the film’s closing moments which doesn’t quite fit with the no-holds-barred approach that’s preceded it. But Lowe’s efficient and darkly-amusing script, as well as a string of committed performances and a splattering of impressively stomach-churning gore, more than make up for this.

Prevenge delivers pretty much everything you’d want from a directional debut, it’s bold, engrossing and adeptly made, distinguishing Lowe as a talented, exciting British director.