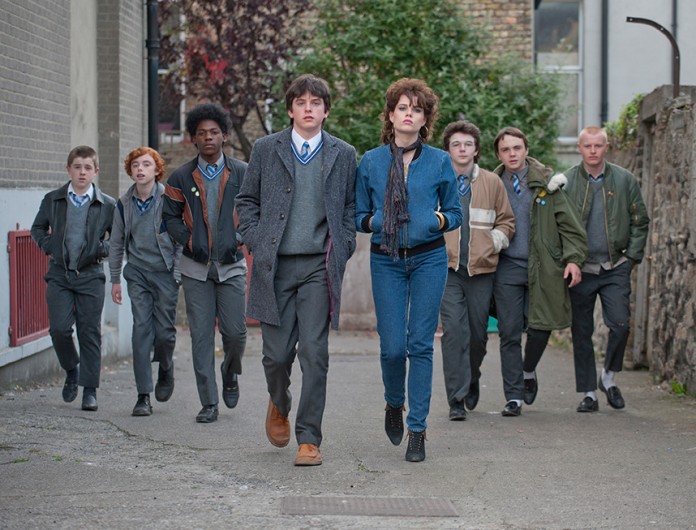 Without doubt, Sing Street is one of the most warm, delightful films released this year, and we had the pleasure to sit down with three of the picture’s rising stars, Mark McKenna (Eamon), Ian Kelly (Barry) and the protagonist, Ferdia Walsh-Peelo (Conor).

We discussed how the three came to be involved in the project – particularly interesting given both McKenna and Walsh-Peelo were non-professional actors, while while talking about how they’ve changed over the course of this experience, and whether they’ve quite gotten used to seeing their faces adorn the walls of the London underground.

How did you all come to be involved in this project? Had any of you even studied acting prior to your auditions?

Ian Kelly: I had acted before so I was cast in the more traditional sense. I did an audition and got the call the next day.

Mark McKenna: I had to be convinced to go by my friend, who kept telling me to audition. I didn’t want to, but she offered me a lift because it was half an hour away from my house, so I thought fine, if you give me a lift I’ll go. Then I waited for over two hours, went in for a five minute audition and thought that was so pointless, but she said she had a good feeling about it. Then about a month later they emailed and asked me to go back in.

It’s amazing how those little decisions can change your life. Is that something you’ve only really come to terms with since the film, or did that sink in during the process of making the film?

Ferdia Walsh-Peelo: It’s more happened now. There are so many moments that I look back on over the last few months, the tiniest things and decisions you make in your life have such a huge impact.

IK: I knew well who John was and that in itself was enough. When I got the part and I met John I asked who was playing the older brother and he said ‘Jack Reynor’ and that was the first time I knew it was big. Because at the time he was doing the worldwide press tour for Transformers, he was, as he still is, a very successful actor. That was my first moment.

Do you think it worked in your favour that you’re all relatively inexperienced at this level, it meant none of you were outdoing each other, it was a first for the majority of you, experiencing everything together.

FWP: Yeah and it was just a really fun experience. We just had a great time, and John has this thing where he immediately makes you feel comfortable on set and he gathers many people who just love making movies and are very passionate about the project which is unique. That created a really nice atmosphere on set, so for a first movie it was just a walk in the park. I’m not saying that the scenes weren’t tough, we all had tough times on set with some scenes, but we had a ball, it didn’t feel daunting in that sense.

IK: It didn’t feel like a minute of work. It was one of the most conducive environments to making lifelong friends. I’ve only been in the one film but I assume they shoot films together as a cast and then reunite a year later for the premiere, but we’ve stayed in contact, we see each other all the time since we wrapped. That’s very unusual for a film and what a wonderful way to make lifelong friends.

Ferdia, when we first meet Conor he’s quite introverted. But over the course of the movie he grows to be confident – was that reflective of your own journey? Did you change quite a lot?

FWP: Yeah, I changed so much. It’s bizarre how much I’ve changed. That’s exactly it. It’s interesting how Sing Street has shaped me as a person. I was an entirely different person when this began. What do you guys think?

IK: I remember thinking you were 14, and now you’re six inches taller than me, and he wasn’t when we started. It was a massive undertaking for any 14 year old. Four months of 5am calls and I couldn’t believe the professionalism.

FWP: I was needed every single day as well. I didn’t have a single day off. It was fairly full-on. But it’s funny you say that, because I’m starting just now to settle and find out who I am now. That’s some deep stuff. But no seriously, that’s what Conor goes through in the film and I’m glad you picked up on that, because that my job with this character, to have that noticeable change from not knowing who he was, and turn into a young man by the end of the movie, that was the trick.

Do you think acting is now what all three of you want to do from here on? Have you made that decision or is it too early to tell?

IK: Yeah I’m hellbent. I’ve been doing TV in Ireland since I was four. I think when I was about 13 I did a couple of weeks shooting and I thought, I’m not sure if I wanna do that. Now fast forward to 2016 and that’s me for life – sorry parents! So yeah for me 100%.

MM: Yeah I’d like to try and do both acting and music and have separate careers. I wanna do both by themselves.

IK: When are you gonna sleep?

The poster for Sing Street is all over the London Underground and on buses… Has that sunk in yet? That you’re faces are decorating the London landscape. It must be surreal. It can’t feel normal yet?

FWP: I look so different now, I don’t actually see it as being me at all. I probably do look exactly like that, but all I see is the character. It’s weird, really weird. It’s like looking at my younger brothers, not me. Even when I’m watching the film I see the character Conor, I’ve stopped seeing myself. Maybe it’s because I’ve seen it so many times I’ve become that character in my head. It’s not me.

IK: I was bald a little heavier when I made this film, so I don’t particularly like seeing my face look like that. But I have family in the UK and it’s really nice for them to see it. My auntie took a picture of it and I didn’t know it was up. I hope I never get used to it and think it’s normal, I’d like to think it’s always special. Maybe it’s mundane now for George Clooney, but I hope it never becomes that for me.

Sing Street is released on May 20th. You can read our 5 star review here, and read our interview with the leading lady Lucy Boynton, here.