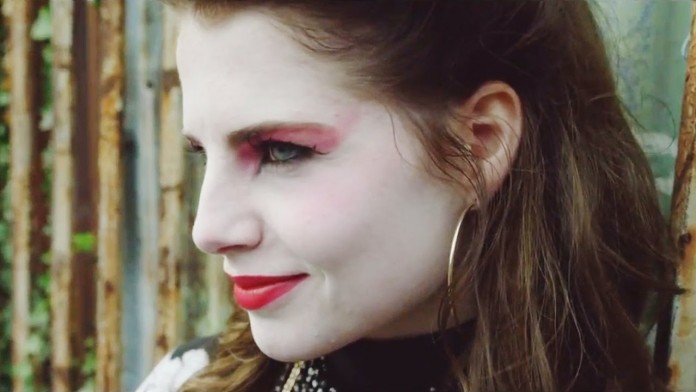 For many fledging young actors, honing their craft in this challenging industry, there comes a realisation – any success in their vocation to lead something rather daunting and unexpected; fame.

For London born Lucy Boynton, celebrity status is very much on the cards, following her astounding turn in John Carney’s charming musical, where she plays the vulnerable, elusive teenager Raphina – but it’s not something she finds particularly appealing. We caught up with her to promote this breathtaking new drama, where she also discusses her work on the forthcoming J.D. Salinger biopic starring Nicholas Hoult, Rebel in the Rye.

What was it about this screenplay that really appealed to you?

It was mainly because this incorporated so many themes. It was sent to me as a comedy and it definitely has those light comedic moments, but it also has realistic, darker tones to it, and a more poignant side to the characters. One thing I love about John’s characters, and this is reflected in his other films as well, is that he never feels the need to glamourise their problems. Especially in this film, we have flawed humans with rough edges and difficulties. Working with such a collaborative director was such an exciting prospect as well, and not one that comes around often, so I had to get involved. I had to do it.

You’re still in the relatively early stages of your career, but you were one of the more experienced heads on set. Was that quite a new experience for you?

Absolutely. For the majority of projects I’ve done in my career I’ve been the youngest on set, so to suddenly be the one with more experience, and having to explain various things to others, was very bizarre, a strange role reversal. But it really made me appreciate John as a director, that was the main point that I got from it, because he knows exactly how to get a good performance from somebody who has been on a thousand sets, like Jack Reynor or Aiden Gillen, to Ferdia Walsh-Peelo, who had done nothing. He can work out exactly how to get a performance out of something, and to understand each scene and scenario. It was incredible and unique to have that trust in a director.

Ferdia has such an engaging screen presence, what was he like to work with?

The first scene we did together was the scene where the characters meet for the first time, and on the very last day we shot the final scene in the film, so it worked really well with our relationship in the film and personally, because when we began filming he was a shy, slightly awkward, rosy-cheeked 14 year old, and by the end, especially when we came back from reshoots, he was suddenly this cool musician guy, so it definitely worked for the arc of the film, and he was a lot of fun to work with.

Your Irish accent was pretty impressive – did that come quite naturally to you, or did you have to take lessons with a dialect coach?

I didn’t have a dialect coach, I’ve always been able to mimic accents and mimic other people, which I always used to do as a kid, so I adopted that. To prepare for my audition I watched so many interviews with Irish actors and Irish films to get into the rhythm. But I was very nervous about it, because we specifically wanted to make sure that we didn’t pinpoint the accent to any one region because we didn’t want the audience to identify where exactly she was from, because that’s the whole point of the character, you don’t know what’s the truth. I was terrified by it, but I think it’s okay!

There is something elusive about Raphina, but did you create a back story for her, or do you go with pretty much exactly what’s on the script?

I knew John had written these characters based on people he had known so I wanted to honour that and be very respectful of what he had created, but John being as collaborative as he is, he gave me more of an opportunity to create her, which forced me into something I wasn’t really used to, which was to create a back story in much more detail than I had before, and it was very liberating because we could take her anywhere.

She’s enigmatic, but there’s a certain vulnerability to her. Was that a challenge to tap into at times, because she has such a confident facade?

It was actually easier to capture the more poignant and fragile sides to Raphina because I so identified with that immediately. I really saw that in her, and so knowing all she’s been through and all the hurt that she’s felt and how lonely she is, it was hard to make her a jolly character, and that was a really major point, because that’s how she feels, it is hard to put on this happy happy facade, and this confident, ‘I’m going places’ facade, when she doesn’t feel that all the time. So it was doing that simultaneously as her and me. I much more enjoyed playing the darker sides and the sadder sides.

Do you think that by being really only the only English actor amongst an Irish cast helped inform your performance? Because Raphina is an outsider of sorts, so was that easier to tap in to because you were on your own, away from home?

Yeah, and with Raphina, even if she is in that home she grew up in, there’s always that feeling of being away from home, she doesn’t feel as though she belongs, nor is she settled – so that definitely helped. But definitely being this slight outsider did help with that.

Are you into 80s music? Were you having to do your research and listen to bands from this era, or was it something you were already well-versed in?

I wasn’t well-versed in it at all, my music taste predates the 80s, I’ve grown up listening to my Dad’s country music, and The Beatles and Cash. 80’s music is so of its time, so listening to on the mornings that we were filming really helped me get into the period and style and attitude. I’ve definitely left a massive Hall and Oates and Talking Heads fan.

I just don’t think it will be as much. The 80s were like the first time people were so expressive, in their fashion and hair and make-up, it was such a statement, whereas now you expect people to dress up as a statement. Everything is accepted now. You go to East London and you see all of that, whereas back then it was the first time people were doing it, which is why we go back to it. Now fashion is just us going back, bringing back the 60’s, the 70’s in cycles on the high street. It feels like an amalgamation of all the different influences.

You’ve got a lot in the pipeline – does this feel a little like the quiet before the storm for you?

It’s strange but I can’t really think of it like that, because for me I’m just so excited about the next project. Obviously I always want the audience to feel for the film as much as I do, and enjoy it as much as I did making it, especially with this. But my focus is always on the character and how I portray them. I look at it in a much smaller, more focused way, rather than the bigger picture and the grand scheme of things.

It’s a career you do for the love of the craft, but what comes with that, inadvertently, is a raised profile, fame even. What does side of the industry mean to you? Is it quite daunting?

It’s not that appealing. I don’t really think it would be to anyone who is doing this for the right reasons. I can’t believe this is my job and I get to pretend for a living, that I get to dip in and out of different periods and times and worlds. I constantly feel that I’ve cheated the system that I get to love my job this much, I’m gonna get busted at some point. So that’s the focus. It’s fun and exciting and ridiculous to see my face on posters on the tube, but it’s a fun thrill to what is the real work and the real enjoyment.

Rebel in the Rye is a big one coming up for you. How does your character fit into this particular story?

I’m so excited about this project, the script is just phenomenal. I play Claire Douglas who is J.D. Salinger’s second wife, and you meet her early on when she’s 19 when they first met, and then we progress throughout his career and life, so you see the arc of their relationship and you see the exciting young love at the beginning and how that then diminishes.

Have you met the real Claire Douglas?

I haven’t yet, but I’m really, really hoping to. Obviously I’d be furious if somebody was playing me in a film and didn’t contact me! So that’s a big responsibility and I want to honour her experiences and do her justice.

Some actors say meeting the subject can be counter-productive, because it almost becomes an impersonation.

Totally, and it would be dangerous if I played her at the age she is now, but because I’m playing her at such a different time in her life the idiosyncrasies and such that she’d have now, I don’t think I’d be as inclined to imitate. It would be quite intimating.

Does it start shooting soon?

I’m actually leaving this week to go and shoot it. I think it began at the end of April and it’s filming in New York.

Is it quite important for you, at this stage in your career, to do lots of different roles, to show off your range early on and avoid any typecasting?

I just think it’s more fun to play a variety of roles. Obviously it’s hard because you only get the scripts that you get sent, but absolutely over the course of my career I really want to play in a diverse selection of roles. I’ve done a few period dramas and period pieces that I absolutely love because the thing that excites me most are doing films that are much further away from my own life and experiences. But as long as the roles themselves are very different and contrasting, then I don’t think it’s dangerous to go back to that.

Sing Street is released on May 20th, you can read our five star review here.