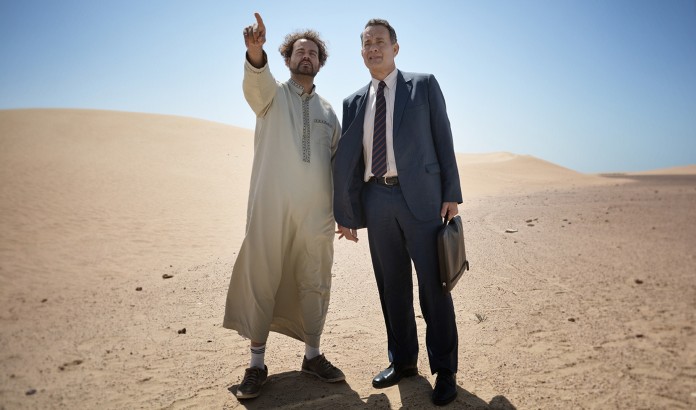 Based on the 2012 Dave Eggers novel, a stranger in a strange land is given a thoughtful and enticing spin with A Hologram for the King – a film which isn’t so much a fish out of water yarn as one that has been dragged out of the tranquil ocean and left to boil in the searing heat. Sure, it’s a familiar dramatic scenario, but director Tom Tykwer has an ace up his sleeve in the casting of beloved A-lister Tom Hanks.

The two previously collaborated on story segments within 2012’s Cloud Atlas and it’s clear from this material that a strong and assured creative bond was forged during their previous time together. While Hanks isn’t exactly playing against type here, he certainly inhabits a role which is refreshingly removed from the recent triumvirate of real-life figures he has portrayed, offering a side to the performer which has been seldom seen. For instance, when was the last time (if any) we witnessed Hanks share scenes of a deep intimacy with a female co-star?

Mild-mannered businessman Alan Clay (Hanks) has been dispatched to Saudi Arabia to pitch the King a state-of-the-art three-dimensional teleconferencing system to help manage communications during the proposed, grandiose-sounding cityscape called the ‘King’s Metropolis of Economy and Trade’. It soon becomes painfully clear to Clay and his colleagues that this will be a prolonged exercise in stretching their patience to breaking point as the idea of traditional timekeeping by the King (and seemingly most of the country’s population) differs greatly to theirs.

The stress of having to deal with his superiors back home and the financial implications of the deal not going through (he’s in the midst of a divorce which has all but cleared him out) takes a physical and emotional toll on Clay as he is faced with the prospect of waiting around in the arid, alien locale. With a young taxi driver named Yousef (Alexander Black) as his only guide to the area, he attempts to wrestle control of his life which takes a further twist when he meets a heartbroken doctor (the luminous Sarita Choudhury) who is treating an ailment of his.

Tykwer is happy to let the initial predicament of his central figure play out at a leisurely pace, taking time to trickle in back-story and finer character detail. Like Clay’s creeping realisation that his assignment may not be as straightforward as initially perceived, it also becomes apparent that the director is doing a fine, unhurried job of drawing you into the world of his protagonist. The cultural clash aspects are mined for good-natured humour, many of the laughs stemming from Yousef’s droll naivety (newcomer Black as the comic foil puts in a career-making performance) and the stunning, sand-swept vistas are every bit as captivating for the audience as they are for the beleaguered Clay.

Admittedly it’s a gentle tale which may irk those looking for something with a little more grit (some of the metaphors and brief fantasy interludes Tykwer conjures up do feel a bit on the nose) but Hanks’ eminently watchable everyman persona shines as brightly as ever in a diverting, warm hug of a film.

“This could have easily been a Cassavetes movie” – Sarita Choudhury, Sunita Mani & Omar Maskati on Blumhouse’s Evil Eye

Keep an eye on Emma Watson, Tom Hanks & John Boyega in the first UK trailer for sci-fi The Circle