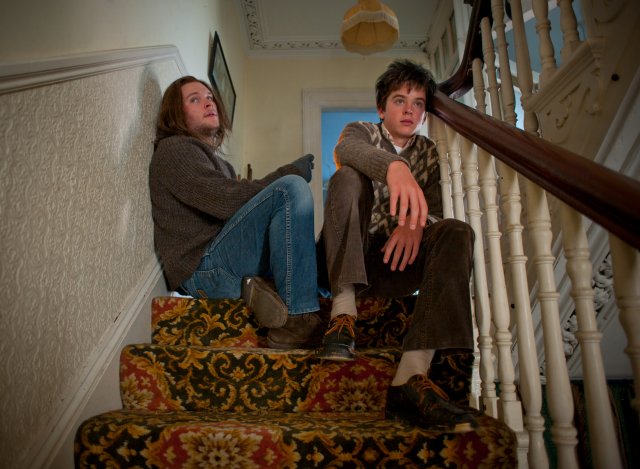 If there’s one criticism to be made of John Carney’s two most commercial preceding endeavours Once and Begin Again, it’s their mawkish tendencies, the pretentious, self-conscious sense of sentimentality that drowns out the sweet sound of the vocals. His latest picture Sing Street completely ridicules that notion, as we’re dealing with a teenage protagonist, and we view him with that same affectionate eye our parents would have when we were that young. To be whimsical at that age is excused, you wear abstract clothes and it’s okay. You can write lyrics for the new love of your life, and it’s okay. And as we’re adopting that infectious, blissful perspective, this film is more than okay.

Set in Dublin during the 1980s, we meet idealist Cosmo (Ferdia Walsh-Peelo), who, in a bid to save on costs following his father’s (Aiden Gillen) unemployment, is sent to a new school, instantly an outsider and alerting the attentions of the resident bully. But then when he sees the beguiling, vulnerable Raphina (Lucy Boynton) standing outside, he wants to impress her, and so following his older brother Brendan’s (Jack Reynor) advice to start a band, he offers the aspiring model the chance to be in his forthcoming music video. When she surprisingly obliges, he realises he now has to start a band and write some music – and quickly. So teaming up with a few local misfits, they form Sing Street, and taking influences from the likes of Duran Duran and The Cure, the collective not only establish themselves as half-decent musicians, but as young adults, finding their way in the world.

Irrespective of your age and what decade you went through adolescence, Sing Street takes you back, gloriously, to the impressionable teenage years, where nothing truly matters and yet things matter more than they ever will. There’s a certain spontaneity to life, the willingness to say yes first and worry about the consequences later. And love – the sheer intensity of it all, captured so endearingly in this nostalgia-infused, fairytale of a movie that is simply impossible to dislike.

The romance between Cosmo and Raphina may be a prevalent theme but at it’s core this is a tale of two brothers, and a remarkable one at that – signalled in the closing credit where this film is dedicated to ‘brothers’. While there may be conflict within the endeavour, it never once detracts from the indelible sense of charm, managing to intertwine very real, severe issues such as parents going through a divorce or facing bullies at school, and maintaining a certain fervour and contagious spirit.

There are times when reality seems heightened somewhat, with the comedic elements ramped up – but then when you question the validity of the outfits or the abstract lyrics, or the do-it-yourself eccentricity of the absurd music videos, you just need to watch the video to Bonnie Tyler’s Total Eclipse of the Heart, and you’ll realise this is somewhat tame in comparison – and yet a hundred times more enjoyable.

Angelina Jolie stars in trailer for ‘Those Who Wish Me Dead’