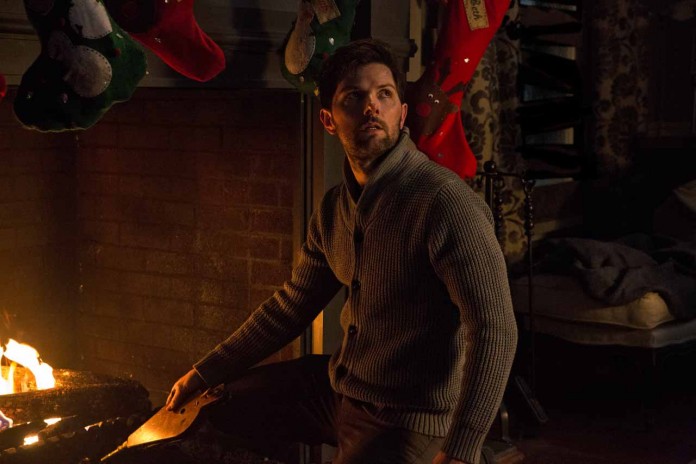 For all of the festive, cinematic offerings every winter, comes the occasional anti-Christmas movie, subverting the tropes of the genre, and revelling in the darker, more sinister side to the holiday season. We spend all day marvelling at lovely decorations, drinking flavoured lattes out of stupid red cups and pretending everything is all hunky dory, because it’s the final month of the year and some kid was born in a barn a couple thousand years ago. While that certainly has its own perks and enchantments, there is something devilishly fun about pictures such as Krampus, to ridicule this perceived notion of joy and wildly contradict it.

Our entry point into this surrealistic world is the youngster Max (Emjay Anthony) who finds himself disillusioned with Christmas when his unruly family members come to stay. His sister Beth (Stefania LaVie Owen) and parents Tom (Adam Scott) and Sarah (Toni Collette) aren’t particularly fond of the company either, but appreciate they have to put up with the latter’s sister Linda (Allison Tolman) and her gun-toting husband Howard (David Koechner) – not to mention their obnoxious children and the ungovernable Aunt Dorothy (Donchata Ferrell). They’re about as far from a close-knit family as you could envisage, but are forced to work together to defeat the maleficent, nefarious Krampus – a fabled demon who preys upon those who have lost their faith in Christmas.

The set-up to this deliberately overstated horror lulls the viewer into a false sense of security. Appearing, initially, like a typical, family comedy set during the festive season, Krampus follows all of the familiar beats. But then director Michael Dougherty turns this tale completely on its head, transpiring in a sinister, demented and violent piece. That being said, Krampus does (somehow) manage to maintain a festive spirit of sorts, revelling in the notion of family, and the idea that despite our differences, and apprehensions towards distant cousins, we’re all on the same team. Dougherty ensures this tale maintains the prevalent human edge, as we’re dealing with two sets of parents fearing for the safety of their offspring. Thanks to having actors with the credentials of Scott and Collette involved too, it adds another layer to this, and injects a sense of humanity to contradict the supernatural.

But Krampus doesn’t compromise the more terrifying elements as a result, as this narrative makes for a tense watch, infiltrating an area we feel so secure in; our home, during Christmas. It’s the epitome of safety, being around your family, wearing your pyjamas and thriving in the home comforts and cosiness on offer, and by exposing this environment it makes us feel so vulnerable. So you had better believe in Santa this year, or else you’ll be forced to believe in Krampus instead, and you most certainly don’t wanna encounter him anytime soon.