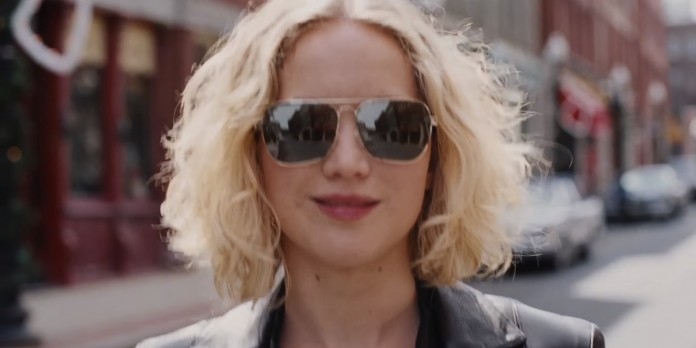 Intimately chronicling the lives of women in their late 20s, wondering what could have been – or what could still be – has spawned a series of remarkable endeavours of late. From Frances Ha to Obvious Child, to the somewhat less impressive (but still interesting) Girl Most Likely and Say When – we’re studiously lingering over a tumultuous age bracket, whereby you reluctantly, inadvertently become an ‘adult’. The impressionable, moulding years are over and settling down begins, as a time to reflect on lost dreams and chances spawned. David O. Russell’s latest, Joy, thrives in such a notion.

Living under a roof consisting of four generations of the same family, Joy (Jennifer Lawrence) is very much the matriarch of the Mangano collective, as the glue which binds this volatile set-up together. Her mother (Virginia Madsen) spends the best part of her days lying in bed watching soap operas, while her father, Rudy (Robert De Niro) is downstairs in the basement alongside her ex-husband and father to her two kids, Tony (Edgar Ramirez). Joy has always been creatively inclined, but her talents and ingenuity have always been left on the wayside as she struggles to keep a roof above the head of so many. But when she has the idea of a self-wringing mop, and garners the attentions of shrewd businessman Neil (Bradley Cooper), she could be on the verge of an invention which changes the fortunes of her family for good. But it most certainly won’t be straightforward.

The idea of ability being dormant, of somebody so inherently talented but never fulfilling their ambitions lays the foundations for an absorbing character study – and it’s the role of Joy which this film survives off. We care so much about her and root so fervently for her cause, as she, even in the more testing moments, ensures that she lives up to her namesake, with an infectious diligence and an unwavering sense of ambition. Lawrence deserves so much credit for her performance too, and while it sounds simplistic and customary, her ability to be so ordinary, in spite of being such a megastar in real life is extraordinary – and not a talent many of her counterparts are blessed with. Lawrence is distinctively subtle, and for somebody so remarkably confident and gracious in front of camera, her talents are most evident in a sequence where she’s presenting on TV channel QVC – and she appears so believably nervous and inexperienced, without that charisma and presence she’s otherwise gifted with.

Joy also manages to be a film about female empowerment without ever feeling contrived in its execution. It’s just the tale of a woman who strives to be the best she can be, and never gives up when doing so. While Joy is still not garnering anywhere near the same amount of acclaim that Silver Lining’s Playbook received – there’s certainly an argument to be had that this is the more accomplished feature of the two, in spite of the superfluous final five minutes.