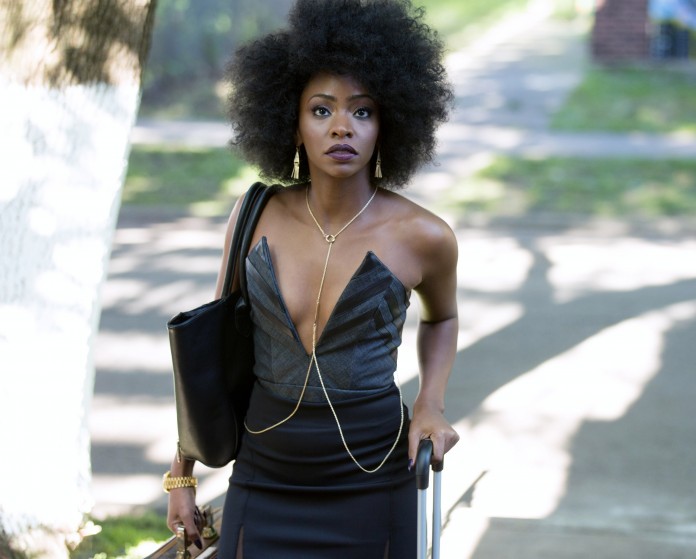 Though presented as a modern day adaptation of Aristophanes’ play Lysistrata, steeped in Greek mythology, there’s something patently Shakespearian about Spike Lee’s latest production, Chi-Raq. Midsummer Night’s Dream springs to mind, with Samuel L. Jackson appearing as Puck, narrating proceedings with his indelible, dulcet tone, while the majority of the dialogue is presented in rhyming couplets, not to mention the dramatised gang warfare not far removed from that of Romeo & Juliet.

Spike Lee isn’t from Chicago, but the current, violent climate on the streets is an issue he has taken it upon himself to address, using this narrative as a catalyst to explore black on black crime and America’s relationship with guns, and those below the poverty line being granted access to them. Two gangs square up – the Spartans, led by rapper Chi-Raq (Nick Cannon) and the Trojans, headed up by Cyclops (Wesley Snipes). During their conflict a stray bullet kills an innocent young girl, leaving behind a bereaved mother (Jennifer Hudson) and two sets of disillusioned girlfriends. So Chi-Raq’s other half Lysistrata (Teyonah Parris) decides to take action, and in a bid to bring peace to the streets, she presents an ultimatum – not to have any sex until the gangs put aside their differences and put the guns down, a notion backed up by the wives and girlfriends across the neighbourhood (and eventually, the world).

In spite of the sheer grandiosity – with a variety of musical numbers included – Lee grounds his film by the profound themes and paramount message of preventing gun crimes in poverty-stricken areas, with a barbed take on the government’s involvement – highlighted in a powerful, rousing speech by the local priest Father Mike Corridan, played by John Cusack, claiming they’re in the “pockets of the RFA”.

Tonally inconsistent, this could be construed as being something of a mess, but what a glorious one – and in spite of the comic tendencies, it never once compromises on the severity of the issue at hand, as the images of those killed innocently, littered around this endeavour, are striking and moving, working as a stark reminder of what this title is vying to convey. Lee also ridicules masculinity, and the pride that comes with it, giving all of the power to the women, in what is a passionately empowering affair.

Chi-Raq is an innovative, resourceful piece of filmmaking, creatively crafted – evident from the opening credits, where the lyrics to Cannon’s song Pray 4 My City are spelt out in bold, red lettering. The choreography of the piece and pacing is spot on, as a stylistic approach that is implemented with a minimum contrivance, particularly in how social media is alluded to throughout, with texts and tweets presented on the screen.

What transpires is a groundbreaking, barbed production that is unlike anything you’ll have ever seen before, and while undoubtedly this will split opinions, with pockets of the audience likely to struggle in adhering to this distinctive technique, for many this will work as a mesmerising, indelible and important piece of contemporary cinema.

Jennifer Hudson soars as Aretha Franklin in trailer for ‘Respect’