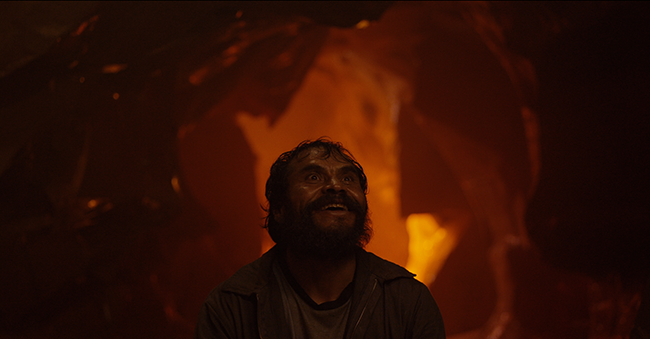 Undoubtedly the winner of 2016’s weirdest cinematic offering, We Are the Flesh proudly wears its many transgressions on its sleeve. Yet for the numerous tick box of taboos on display (a couple of which, it could be argued, are a step too far) the film still manages to be an often engrossing and occasionally jet-black humorous vision of dystopia. While filmmaker Emiliano Rocha Minter is indebted in part to the works of Alejandro Jodorowsky and David Lynch (the rumbling Eraserhead-like soundscape immediately gets under your skin and burrows itself there for the duration) this is a confident debut via an inventive and idiosyncratic vision, even if devoid of anything in the way of subtlety.

A supremely creepy hobo (Miss Bala’s Noé Hernández in remarkable, full-on nutso mode) traipses around his filthy and dilapidated warehouse surroundings, intermittently stirring his festering drum of food sludge he’s converting to fuel. Into his grotty environment comes a pair of young seemingly homeless siblings who help the older man construct what looks like a giant art installation which slowly morphs into a cavernous, womb-like structure as the film progresses. In return for their time and effort, he feeds the duo an unwholesome diet of grubby, uncooked eggs (scenes almost as gut-wrenching as the inherently provocative content) and begins to toy with them, insisting they copulate, although he’s fully aware of their relationship to each other. Soon they are indulging in a number of depraved acts as he watches on as a kind of twisted puppeteer.

It’s not immediately apparent where Minter is heading as we first witness Hernández thrashing around in his grim surroundings. For the initial 20 minutes or so you could be almost lulled into thinking that what you’re seeing in front of you is a quirky, albeit disturbing, short. It’s only once the ample amount of flesh is unveiled that it descends into a hypnotic, hypersexualised journey of the forbidden. You don’t need to dig deep to realise some kind of parable concerning rebirth is buried lightly underneath the colourful assortment of bodily fluids – the young filmmaker is only too happy to bludgeon you with it, particularly following the climactic sequence which, to paraphrase Morrissey, even Caligula would have balked at.

This is about as far removed from the usual feel-good Friday night cinematic fare as you can humanly get, and while you might feel the need to take a nice warm shower as the end credits roll, you may also be surprised at just how much you enjoyed revelling in the revulsion.

We are the Flesh: the very best of Mexican surrealist cinema