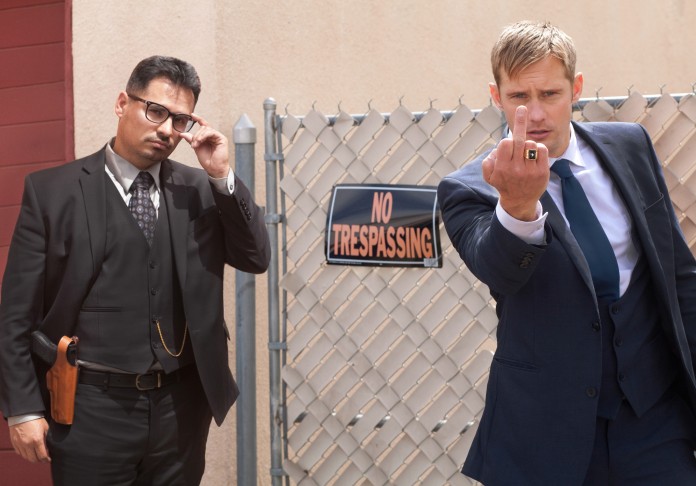 Filmmakers who make alluring, resourceful cinema in their home nation are so often tempted into a more grandiose, Hollywood endeavour – and the results can sometimes be questionable. For John Michael McDonagh, the creative presence behind The Guard and Calvary, that has very much been the case with his third endeavour, the American-set War on Everyone.

Part of the charm to his preceding features was that small-town Irish mentality, which served and informed his narratives so triumphantly, but he’s struggled to recreate that same impact and translate his unique, meta and doltish humour in such an environment. Similarly to what occurred with his brother Martin, who went from In Bruges to the underwhelming Seven Psychopaths, you’d have thought perhaps he may have learnt from such mistakes. The grass isn’t always greener – and you don’t get much greener than Ireland.

Terry Monroe (Alexander Skarsgard) and Bob Bolano (Michael Pena) are destructive forces within the law enforcement, two renegade cops who thrive on corruption and getting the very best financial deal for themselves. So they hit a goldmine when stumbling across a million dollar robbery, and using their informants on the inside – the calamitous Reggie (Malcolm Barrett) and his friend (David Wilmot) to track the movements of the perpetrators; the affluent, nefarious villain (Theo James) and strip club owner Birdwell (Caleb Landry Jones). But as they dig deeper into this complex case, they find themselves caught up in a seedy, sinister criminal underground that is even beyond their reckoning.

War on Everyone is effectively one joke stretched out; that of two cops doing everything that cops really ought not to, persistently breaking the laws they’ve set. Though breeding hilarious results in the opening stages, it grows somewhat tedious as we progress, as the film is crying out for more variety. The jokes are, as expected, gloriously offensive, and some pockets of the audience may well object to them – but it’s one of those instances where nobody is safe from ridicule, no matter what colour, race or religion you may be, everybody is accounted for (even the Irish), so it becomes fair-game.

The two protagonists are traditionalist anti-heroes, but it’s the villains that are more creatively crafted, particularly for Birdwell, a disquieting and eccentric individual who injects a dark edge to proceedings. The film ends on a rather bleak, harrowing note too, but by the point that comes into play it’s too little too late, with the drama and profundity feeling out of place considering the irreverence that preceded it.

The melancholy is not as well-judged as McDonagh managed in either of his last two films, as there was a distinctive pathos to both The Guard and Calvary which worked in conjunction with the outlandish comedic style. But this thrives strictly in the latter, and while that shouldn’t equate to being a problem as such, it does become one when the jokes are simply not of a very high standard.