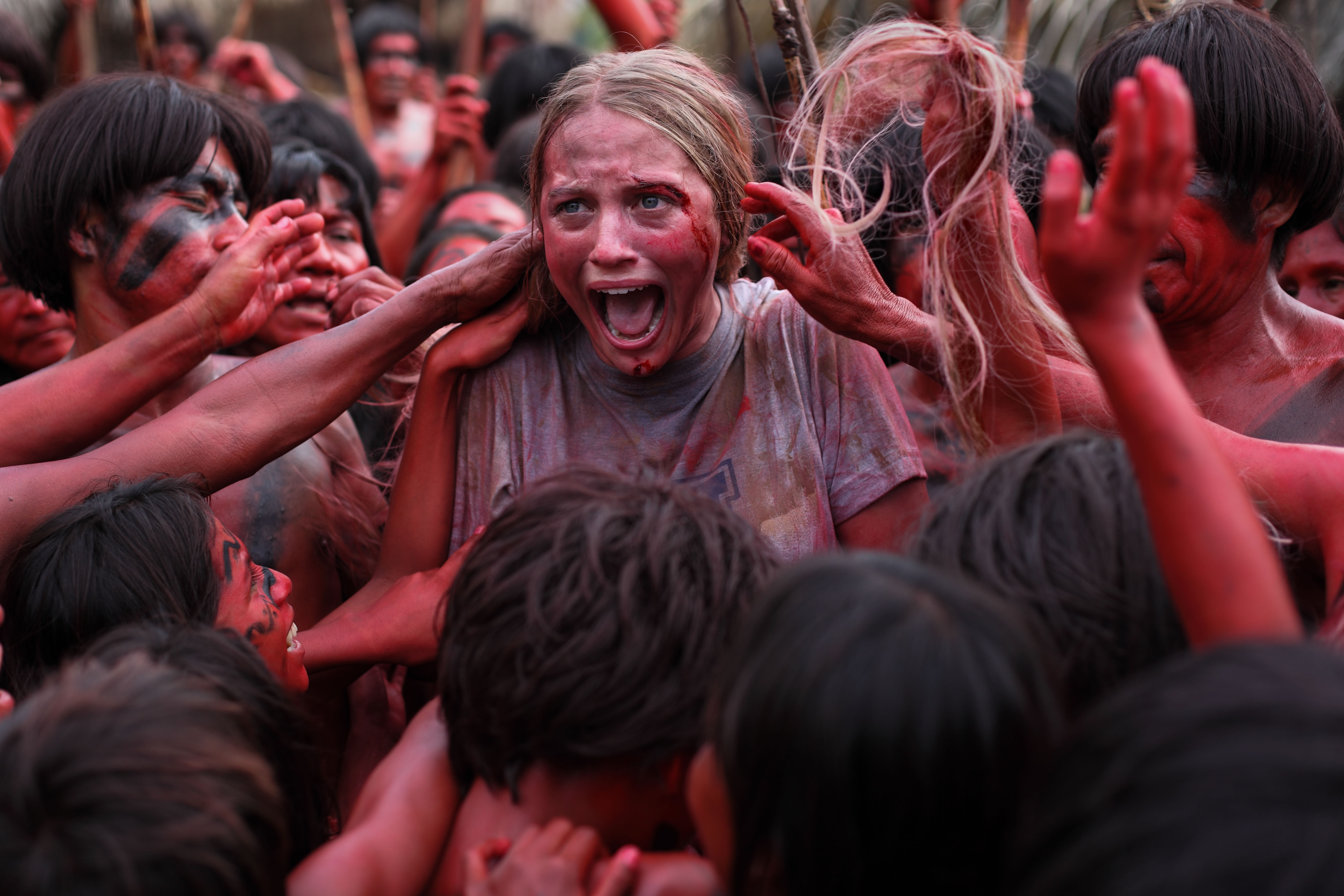 If you begin to search “films about cann…” into Google, the first two suggested options that appear are ‘cannabis’, and ‘cannibalism’. Well, Eli Roth has cornered the market with his latest horror offering, The Green Inferno. Like a sort of warped version of Harold and Kumar, those who have always wanted to see stoned cannibals get the munchies on screen will leave happy. However for everyone else, this is an abomination.

Lorenza Izzo plays Justine, an impressionable student who is tempted into an activist group at college by her new friend Jonah (Aaron Burns). The impassioned leader of the collective is Alejandro (Ariel Levy), who convinces the group to head out to the Amazon, to campaign against the destruction of the rainforest. Though expecting a potentially life-threatening trip, as they go head to head with the construction workers – what they hadn’t accounted for, is how the locals would feel about their arrival, as they disrupt a secluded tribe of cannibals.

Incredibly, the Peruvian tribe being portrayed on screen are entirely genuine, and have never before being captured on camera (apparently). While that’s quite a feat, to have convinced them to get on board, their naivety towards filmmaking (Roth has since admitted he had to explain the concept of cinema to them), it does make this picture feel somewhat exploitative of their culture and ethics, and not truly respectful of their traditions. While there are undoubtedly benefits that come with using real people and shooting in real locations, for a film of such a low-budget, to vie for realism means making compromises elsewhere, and the low productional quality is evidently one them, as a film that looks like it might have been filmed on a Blackberry.

What Roth has achieved, however, is the balancing of tone, managing to handle some disturbing themes with something of a joviality, as a playful edge is consistent throughout this movie, counteracting against the more gruesome moments. Such an approach means the viewer can enjoy brief moments of light relief, and not be overwhelmed by the severity of the themes explored. That’s not to say the film isn’t gory though, but given how much Roth is willing to expose to us, we become almost immune and desensitised to it, as from the moment the group reach the jungle, following a very normalised, pensive opening act, it’s unrelenting from thereon. It’s a shame because less is so often more in this genre, though it’s a notion wholeheartedly ignored by the man in the director’s chair, as we lose any sense of impact, feeling like you’ve seen it all before – because you have.

You can’t help but feel that Roth is being gruesome for the mere sake of it, and a subtle approach would be more beneficial. Though it’s that shocking nature which ties this to classic cannibal movies of old (such as Cannibal Holocaust), and there is an audience for this deliberate B-movie approach. However there are too many other contributing factors which let this film down, with so many plot-holes, and a convoluted, unnecessary conclusion which does little but baffle you, adding confusing to the already established feeling of repulsion when leaving the cinema. Charming.

Malin Akerman on diving into dark territory on thriller The Aviary