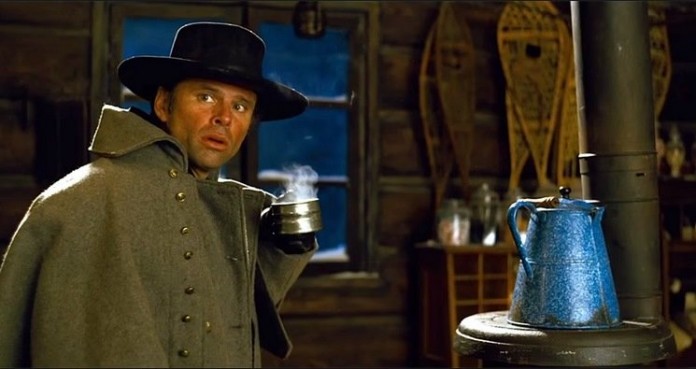 Walton Goggins has one of those faces you recognise instantly. You would also be hard-pressed to forget one of the coolest sounding names in Hollywood, so its surprising that the actor isn’t the first person you pick out of the stellar line-up for Quentin Tarantino’s latest film.

Starring alongside Samuel L. Jackson, Kurt Russell, Jennifer Jason Leigh and Tom Roth, Goggins plays an initially unassuming character in the ensemble for The Hateful Eight. Of course, with this being a Tarantino movie, there is far more than initially meets the eye.

“I’ve been in television in the States for upwards of fifteen years now, so the idea of the three-hour long movie is not that different to me” Goggins replied to HeyUGuys when quizzed about the length of the movie.

“Between The Shield and Justified, for us every season is a thirteen hour story. At the end of the show we hopefully walk away from it with an 84-hour story. Its a five month shoot, which is also what Quentin usually does.”

“What is so extraordinary about working with Quentin Tarantino is that firstly it’s only a small group of people who get that privilege, and it is a privilege, to go on that journey of creativity. Secondly getting the opportunity to say his words means that five months is too short. How many movies are around two hours 45 minutes or so? This has an intermission and an overture as well. As a fan and friend Quentin I could listen to that man for hours.”

The film is shot in 70mm, and presented as such. What does the format offer that would otherwise be lacking?

I’ve seen it four times in this format. What you realise is that even though all of us were questioning that choice. ‘How and Why in one room?’ It seems like that lens is to capture landscapes, but that’s why he did it.

From the first footage we saw in dailies I got it immediately. I was inside that room. I was a part of it on the stage. I understood the complexity of the story that he was telling, because its not just what’s in focus that is the story. Its whoever the person is behind the person in focus. Or even the person behind that person. It goes all the way to what the snow is doing outside. Watch it and see how it accumulates and how angry it gets once night falls. It becomes so claustrophobic. I don’t know if anyone has ever described that format of 70mm as claustrophobic because they are so wide. He knew to do that.

The use of the intermission in the movie is, with typical Tarantino attention, perfectly placed in the narrative. It invites repeated viewings too, so is that the point to rewind and watch again?

You pick up and realise so much, without spoilers, that the interactions between everyone in that room are so detailed. They are silent and layered, but between everyone in the room. If there is an exception it is my character. You have to question everyone’s motivation and you really have to question Sheriff Chris Mannix’s motivation. Why is he here? That dovetails into the story in a way I could never have anticipated.

Is it possible to pick up the motivation of Mannix straight away or is it something that evolves whilst reading the script?

The experience you have watching it is basically the experience we have reading it. You can’t speak, I had that with Django too when I read it. I would love to have a photo-series of peoples faces as they react to it. You need to be alone to digest it. You pick it up along the way. A lot of it was dictated by one question. After reading it, I walked outside with Quentin when we were at his house. The question was ‘Am I or Am I not the Sheriff of Red Rock?’

He said, ‘I want you to answer that question and I don’t want you to tell me your answer.’ We’ve been doing thos for 18 months now since the stage reading and almost every person that has watched the movie has asked me that question. Every person in the cast, who are my very good friends, are still debating it. Its back and forth.

The only person who has never asked me is Quentin. He meant it when he said it. Chris Mannix’s world view is dictated by where he comes from and by his father. He’s probably never had a conversation with an African-American, so he is just regurgitating information that he has been spoon fed his whole life. Over the course of this story he changes dramatically and becomes a man capable of thinking for himself.”

Chris Mannix displays his disdain for his black travel companion from the first moment they meet. Is his world view at the start of the film something that is still present in America?

How could it not be? It’s prevalent the world over. What Quentin so deftly articulated in this movie to me – and I don’t know if it is possible to change the hearts and minds of a whole group of people, I think that takes time – but I do know that you can change the heart and mind of just one person. And that happens in this story. It’s unexpected and it is beautiful. It speaks to race-relations at that time and is part of the ongoing conversation. You have to step outside of ignorance.

On to TV series Justified – your character Boyd has developed over the course of several series, but are there any similarities between him and Mannix?

Originally he was just in the short story by Elmore Leonard. He died, and I died  while making the pilot. I’m a huge fan of Timothy Olyphant and all the people at FX. We did The Shield there for several years too. Over the course of the show, when they showed it to people, they said you can’t kill him off. He is the show.

I was looking to do something else, so when they offered it to me I said I wanted autonomy over the character. I wanted him to be the smartest person in the room. I wanted to understand three-dimensionally what this relationship is. I didn’t want to sell out where I was coming from. I thought it was an incredible opportunity to explore the poor and disenfranchised in America, and Bucolic  America, because I think that audience is so often overlooked. In some ways I feel this is a show for them and that Boyd speaks to them.

Six years later I’m still pinching myself to get the opportunity to fully flesh out this very complex person’s point of view.

The Hateful Eight is released on January 8th. You can watch our video interview with Quentin Tarantino here.

The cast of The Last Days of Ptolemy Grey on Samuel L. Jackson, Walter Mosley & the heartbreak of dementia