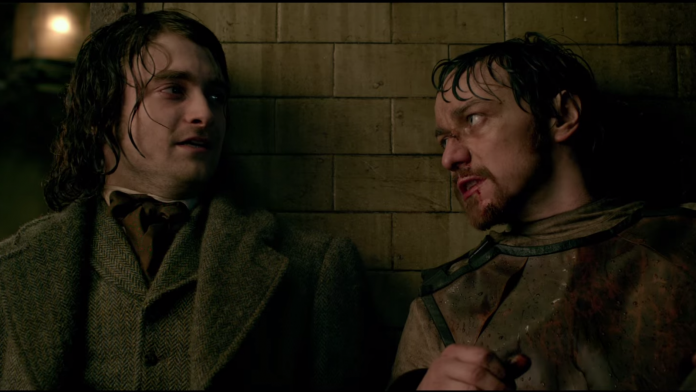 To delve into a familiar, well-known narrative from a unique, outside perspective is becoming something of a popular trend in contemporary cinema. Whether that be the tale of James Dean through the eyes of Dennis Stock in Life, or that of Lance Armstrong – told through journalist David Walsh in The Program. It’s that notion of retelling a story but with a twist, and now, with Paul McGuigan’s resourceful reimagining of Mary Shelley’s legendary Frankenstein, though fictional, we’re doing much of the same thing, as now we look into this renowned set of events from the perspective of the eponymous protagonist’s loyal assistant, Igor.

Beginning life as a circus clown, Igor (Daniel Radcliffe) is tormented and bullied, until one day when he conducts an emergency, spontaneous procedure to save the life of his colleague Lorelei (Jessica Brown Findlay). His swift ingenuity impresses the observing radical doctor and scientist Victor Frankenstein (James McAvoy) who decides to help the hunchbacked entertainer to escape the circus and join him as a protege and assistant, as he works tirelessly on a groundbreaking project to pervert the notion of mortality, and bring people back from the dead. While the pair become obsessed with their research, their previous exploits and shady, unconventional means of practising their craft garners the attention of the diligent, uncompromising detective, Roderick Turpin (Andrew Scott).

There’s a real sense of adventure to this playful endeavour, which is evident in the opening act, and the indelible chase sequence taking place in the circus, as our heroes utilise the equipment and props as a means of escaping. It’s all very fun and wilfully overstated, which it needs to be – as this narrative takes a surrealist, superhuman turn, so establishing the tone early on helps for us to suspend our disbelief when it really matters. Nonetheless, the picture heads down a dark, deranged path, making for a film that is tonally inconsistent, and while aesthetically gratifying, as we immerse ourselves in the vibrancy of the Victorian London setting, McGuigan borrows from various genre tropes, such as the gothic romance, the horror, thriller, and the period drama, without truly thriving in any one in particular.

McGuigan does, however, manage to blur the line between good and evil, crafting a picture that is without your archetypal heroes and villains. In some regards Turpin represents the antagonist of the piece, and yet he’s a full bodied creation that is actually fighting a worthy cause, attempting to thwart a plan we don’t mind being thwarted – as while we become beguiled by the infectious enthusiasm of Frankenstein, we still aren’t completely convinced with his endeavour, wary of the severe implications. McAvoy steals the show as the titular role, bringing depth and nuance to a role that seems to have been written without any, adding a degree of humanity to this monstrous scientist. Radcliffe, on the other hand, isn’t quite as impressive, but it doesn’t hold back the film in this instance, as Igor represents something of a cipher, taking a back seat and merely providing an entry point for the viewer into this deranged set of events.

Conversely, Scott impresses (as always) – following on his turn in Bond with yet another character who is difficult to judge, as we remain unconvinced as to whether we can trust this man or not. His role also brings in the religion versus science debate which enriches this narrative, as while Turpin represents the former, Frankenstein worships the latter, but as they collide McGuigan (crucially) takes no sides. So we’re left to make up our own mind up – which is emblematic of the entire film, as we wonder who the real monster in this situation truly is.

Andrew Scott and Ruth Wilson star in trailer for ‘Oslo’