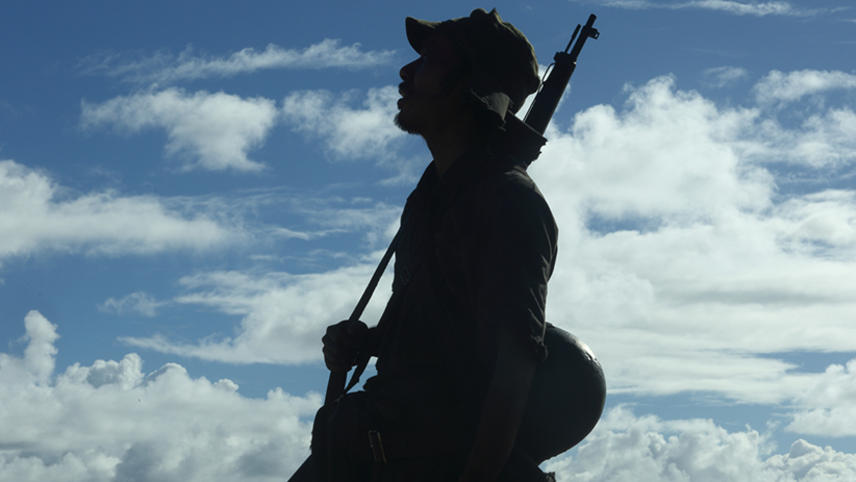 One of the few films in competition at Venice this year that dares to be different, Shinya Tsukamoto’s Nobi is a serious contender for the big prize. Whereas films such as Amos Gitai’s Tsili (out of competition) bear much in relation to experimental theatre, Tsukamoto’s movie is pure cinema.

That he is also the producer, cinematographer, writer and lead actor makes the film even more remarkable.

Nobi is set in the Philippines in the final stage of WWII; the depleted Japanese army is on its way home, but getting there is no easy task. Tamura (Tsukamoto) is suffering from TB. Of no use to his commanding officer, he’s packed off the to the field hospital, where he sees the writhing mass of the wounded left out in the open to die. The doctor has no time for him and he is sent back to his base. This back and forth continues until the company leader is done with him and then the hospital is blasted to smithereens, leaving Tamura alone in the jungle. We learn that he is a writer and intellectual; the war and the killing are anathema to him and when we do see him kill, it is out of immense fear and confusion.

After this act, he throws his rifle into the river only to meet up with a fellow patient from the field hospital, Nagamatsu (Yusaku Mori) and his platoon and be rearmed. They are heading for an assembly point in order to leave the island, but have to face American fire to get there. The carnage that ensues leaves Tamura and Nagamatsu among a handful of survivors. As they forage in the jungle, Tamura realises he has been given human flesh to eat and that Nagamatsu has been hunting soldiers, not monkeys, for meat in order to survive.

Tsukamoto’s cinematography illuminates a broad palette which changes according to location. His platoon’s base is in darkness, the verdant jungle glimpsed through a hole in Tamura’s hat. The vivid greens of the jungle as he walks to and from the field hospital are full of life, but the hospital itself is steeped in hellish reds. We view virtually every scene from Tamura’s perspective, watching the descent into cruelty and cannibalism as these men are stripped of their essential humanity, the lush paradise of the island in stark contrast to the hell it contains. Although there are plenty of scenes depicting the carnage and its effects, one scene in which Nagamatsu metes out his revenge on a fellow soldier shows barely a smattering of blood but is one of the most visceral moments of the film.

There have been many films portraying Japanese army’s propensity for cruelty against the enemy (and soon we’ll have another, with Angelina Jolie’s Unbroken) but Tsukamoto’s film reminds us that there were many Japanese scarred by the war and the acts perpetrated on the battlefield. He reminds us that all are marked by the atrocities of war and that winners and losers alike have to bear the burden of their memories and struggle to find their humanity anew once peace returns.