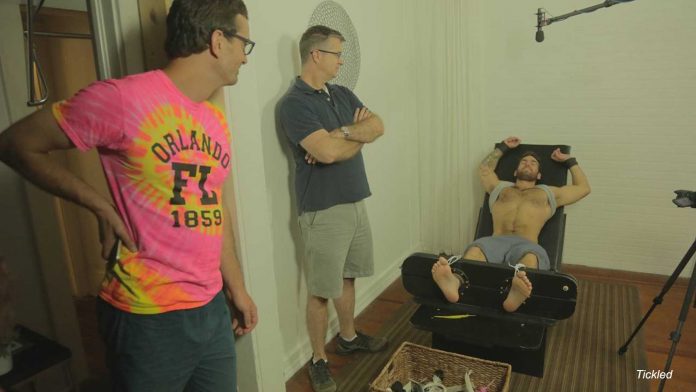 Tickling – that irritating passive-aggressive act of “affection” that your spouse thinks is cute, is also a globally competitive sport. The game, aptly named Competitive Endurance Tickling, consists of a man strapped onto a flat surface who is then subjected to unrelenting tickling by a band of men. This homoerotic sport (however tenuous a claim the title “sport” is) catches the eye of New Zealand pop-culture journalist David Ferrier – also co-director of this documentary – who wishes to reach out to the organisers behind this growing phenomenon.

He discovers it’s Jane O’Brien Media that is hosting these videos and decides to contact them directly. Ferrier, thinking this will be another silly story for his portfolio, is taken aback to the series of hostile and homophobic messages, explicitly telling him that this is a heterosexual activity. Ferrier partners with Dylan Reeve to investigate who is behind this, and to try to understand their aggressive rejection of their proposals. After all, it’s tickling: how bad could it be?

Ferrier narrates his investigation and the organic growth of this documentary. Part-behind-the-scenes and part-fly-on-the-wall, this effective documentary places the audience front and centre of this bizarre underworld. The chronology of the events that are depicted on-screen gives the film this urgency that never lets it’s audience go. With ad-hoc opportunistic moments to speak to those involved e.g. the lawyers, who travelled from the USA to NZ to stop Ferrier and Reeve’s investigation, behave in a suspicious manner, provides a rawness to this documentary.

However, it’s a f***ing tickling competition! The Kafkaesque absurdity that underpins this whole investigation makes it a head-scratching experience at first, given the secretive nature of those involved, and the dark underbelly of this sport that never fully meshes. The arrival of the aforementioned lawyers is more creepy than sinister, but it’s not without malevolence: their warnings, shot with secret cameras in coffee cups, and secret audio recordings from outside the meeting rooms, jars further with the tickling that is at the centre of this investigation.

This sway from comedic absurdity to case studies of those involved who have been greatly affected by the organisations manipulative, volatile, and controlling temperament makes such dramatic revelations all the more shocking. It stops viewers in their pathway and forces them to acknowledge the victims behind the joke. A powerful narrative construct that takes tonal risks, and keeps audiences on the edge of their seat, as the deceit goes deeper, and darker, to the core.