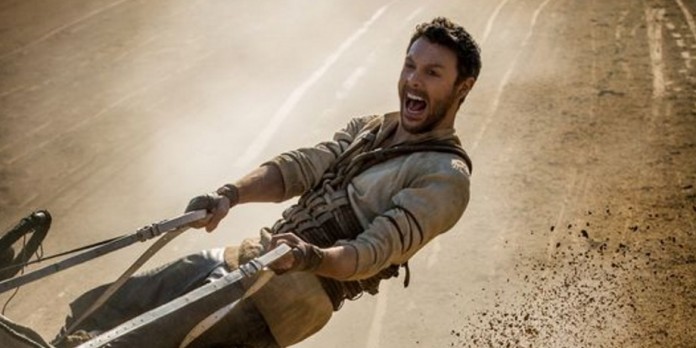 Remakes are prevalent in Hollywood at present, with original screenplays becoming few and far between. Instead audiences are being treated to reboots, remakes, sequels and prequels, which brings us to the latest endeavour, in the form for Ben-Hur.

It’s one thing to remake a movie, but another to remake a movie that won a record 11 Oscars (of the 12 it was nominated for), which stood for 38 years. The story of Ben-Hur comes from the 1880 novel called Ben-Hur: A Tale of the Christ by Lew Wallace. This 2016 version is actually the fourth version of the film with 2 silent-movie versions released in 1907 and then again in 1925 but it was the 1959 film which set a benchmark when it comes to the scale of a Hollywood production breaking records for the number of extras, production costs, set size, costumes… the list goes on. Charlton Heston took on the role as Judah Ben-Hur, a wealthy man who becomes stuck between his native Jewish people and the Roman Empire at the height of Julius Caesar’s rule.

Director Timur Bekmambetov (Wanted), takes the directing helm of the 2016 version, with Jack Huston in the aforementioned title role. Huston is a relative newcomer who you may well know as World War One veteran Richard Harrow in the fantastic Boardwalk Empire, having also appeared in the Coen Brothers’ Hail Caesar and David O. Russell’s American Hustle – but this is his first mainstream lead role.

The movie opens with the eponymous protagonist, joined by his adopted Roman brother Messala Severus (Toby Kebbell) outside the gates to the epic Roman circus, about to square off head to head in what we know will become an epic chariot race. After an exchange of hateful words, we’re taken back eight years to the loving brothers riding on the plains of Jerusalem. If there’s one thing this film can boast, it’s the beautiful scenery and stunning landscapes used from start to finish (much of which was not created in a computer).

Following an accident seeing Judah badly hurt, it becomes evident that that there is a deep love for the brothers as Messala carries him home to his family. Man of Steel’s Ayelet Zurer plays the lead’s mother who evidently has a favourite in Judah, provoking empathy towards the adopted brother. Desperate to experience life outside of Jerusalem, it’s not long before Messala decides to leave his family to join the Roman’s and help to expand their empire and gain acceptance from his mother.

Years pass by and the brothers’ lives take very different paths. Judah is a prominent wealthy prince in Jerusalem while Messala has become a Captain in the Roman army. Various groups are set on uprising against the Roman Empire and ultimately it becomes the job of Messala to quash them with the help of his brother prior to the arrival of Pontius Pilot. This is where the story starts to split from its 1959 counterpart with the uprising group of rebels replacing the role of the accidental rock fall caused by Judah’s sister Tirzah (Sofia Black-D’Elia), with Judah ultimately taking the blame.

From here that the movie opens up into an epic of its own right, and it’s not long before we see Judah hit the high-seas when he becomes a Roman prisoner and we see a fantastic sequence involving the slaves in the galley of the Roman fleet of ships. In some of the most intense claustrophobic scenes, we’re taken into the galley seeing only what Judah sees. It really is a brilliant arrangement as their ship rams into another and again, we never once leave that claustrophobic place.

Meanwhile, you’d be forgiven for forgetting that Morgan Freeman is in this movie. He plays Ilderim; a charioteer owner whose goal in life is to make money, think of him like Oliver Reed’s Proximo in Gladiator. It soon becomes apparent that much like Proximo, Ilderim has a soft heart and soon warms to Judah. The pair form a strong bond and it’s this which ultimately sees Judah back in Jerusalem taking on his brother for the climax of the movie in the circus for the epic chariot race. Ben-Hur impresses visually so many times, with the stunning scenery, wonderful cinematography,as well as the use of practical locations and wonderful sets, yet, and while Freeman performs admirably as he always does, he remains frustratingly underused.

Huston leads the cast well however, with a wonderful performance from his on-screen wife Esther (Nazanin Boniadi) who carries the emotion of the film perfectly throughout. Kebbell is used to playing the bad-guy and does a great job here too, though if there was one criticism it would be his accent seems to travel from Londoner to posh Englishman rather too swiftly. Much like Freeman, the wonderful Pilou Asbæk (Pontius Pilot) is underused in the movie, mainly utilised for one-liners and reaction shots.

The story of Ben-Hur has a wonderful dynamic as our lead character meets Jesus of Nazareth (played by Rodrigo Santoro) throughout the story in different circumstances. Rodrigo Santoro plays the role of Jesus and again where as the connections made complete sense in the ’59 version, here they feel somewhat shoehorned in and don’t have the emotional connection that was needed to have the audience invest in this particular strand of the narrative. Bekmambetov’s Ben-Hur has many nods to the 1959 version and you’ll smile as the fish which count the laps is carried past the camera and then seen again as they are erected on their plinth for the chariot race.

Unlike Gladiator which carried a 15 rating, Ben-Hur has a 12A rating in the UK and it feels as though it really should be higher in order to convey some of the horrors of this brutal era. It all very polished and the danger that were meant to be evident on screen often don’t really feel like danger at all. It’s also impossible to compare this version with its predecessor which was ultimately one of the greatest pieces of cinema ever made. 40 years prior to the invention of CGI, the filmmakers had to work to get these giant sets and giant casts assembled and placed in camera practically rather than adding in a computer later on. Although this movie is epic in places, it’s unlikely to have quite the same effect.

Ben-Hur is a vibrant, fun-filled action movie set between 25 and 33 AD and the filmmakers do a wonderful job of capturing the era on-screen. The horsemanship is simply astonishing with so much of the movie involving the animal (despite many being built inside a computer). That all said, fans of the four legged beasts will need to watch with caution as being a horse in this era was not a happy place to be!

If you want a fun, action-fuelled movie Ben-Hur is likely to be just for you, but when comparing to its epic, historical counter-part (which is rather hard to avoid doing), then it regrettably leaves a lot to be desired.