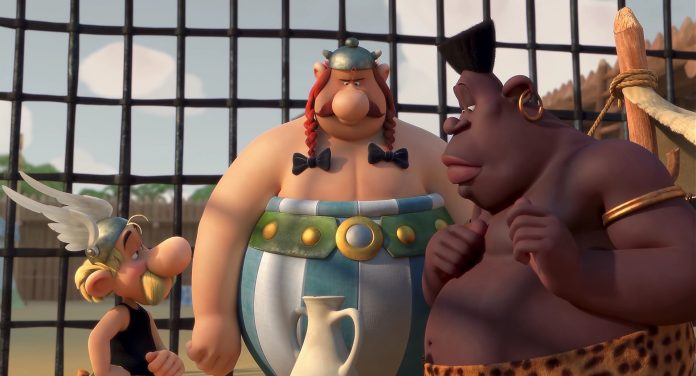 Asterix and Obelix rekindle their little-and-large double act and the result is a kid-friendly animated romp with a certain sense of innocent charm, but that’s really about it. The video-game visuals are more N64 than PS4 and the pun-tastic dialogue is both badly dubbed (the French-language original came out in 2014) and lazily written (“These acorns are nuts!”). In a crowded marketplace it’s unlikely to make much of a splash or live particularly long in the memory.

The familiar voice cast is headlined by Jack Whitehall (The Bad Education Movie) and Nick Frost (The World’s End), the former playing pint-sized Gaul Asterix and the latter his trusty sidekick – pig-tailed, big-bottomed brute Obelix. They and their raucous barbarian brothers represent the last remaining resistance to the mighty Roman Empire, essentially impervious to attack thanks to a drug-pushing Druid who supplies them with a magical, strength-giving elixir.

However, Emperor Julius Caesar (a dastardly blowhard voiced by Jim Broadbent) has finally cottoned on that force isn’t the way to go and formulated a cunning plot. Instead of hitting the Gauls head on he plans to raze their beloved forest to the ground and replace it with a state-of-the-art apartment complex – the titular Mansions of the Gods. The lure of Roman luxury will surely be too much to resist and the hairy rebels will be betraying their traditions in no time.

Using gentrification as a weapon is an interesting way to go. As the moneyed, middle-class Romans flock to their new accommodation the Gaul encampment transforms into a bustling bazaar, the once happy-go-lucky villagers hiking up their prices and then ruthlessly trying to undercut each other. It’s just a shame this satirical edge is so short-lived. Almost immediately it gives way to an endless torrent of sight gags and repetitive slapstick, ten seconds rarely going by without someone being smashed in the face with livestock. Even the little’uns are likely to grow weary.

Only occasionally is there a reprieve from the monotony. Matt Berry is good value as buffoonish chieftain Vitalstatistix, we get a decent running gag about gladiatorial combat being as fixed as professional wrestling and the action-heavy finale features nods to The Lord of the Rings, The Lion King and King Kong – Obelix standing in for the giant ape and The Mansions the Empire State. If you’re looking for solid Sunday morning fare you could do worse, but this is out of place on the silver screen.

“Wassup!!!” Trailer lands for ‘What We Do in the Shadows’ season 4

Win The Duke on DVD