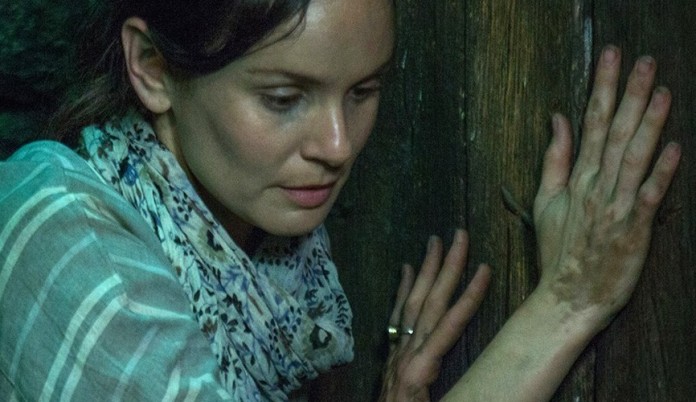 Supernatural scares are easy to come by in 2016. Posters of creatures with Disney-scale eyes, and the devil inside, tile the underground and moss-peppered walls of our towns with aesthetic white noise. Whilst fear factories like Blumhouse crank out tolerable chillers by the baker’s dozen, it’s growing harder to find an original way to tell a traditional ghost story. But Johannes Roberts has found his voice.

Maria (Sarah Wayne Callies) and Michael (Jeremy Sisto) believe they are embracing the East meets West dream when they evolve a buying trip for Michael’s homewares business into a brand new life in India. Better yet, Maria is pregnant with the idealistic young couple’s first child. The future sparkles with the exotic promise of the myriad ways the two shall live happily ever after. They live out six years of that happiness before things go quite devastatingly wrong.

Everyone deals with grief differently. For Michael it is a matter of carefully navigating his way through the day – avoiding gasp-sharp reminders of his lost son and staying strong for the sake of his wife and daughter. Michael’s stoicism, his decision to move forward, even his ability to sleep through the night are unfathomable to Maria. She has survived the accident that stole her son, Oliver, in body alone.

Acting solely to save her daughter, Maria made a fatal choice, the guilt for which reverberates through every subsequent moment of her life. She attempts suicide as a way to atone. A self-sacrifice for the child she sacrificed and desperate gesture of apology and escape. Only then does housekeeper Piki (Suchitra Pillai) – a sister in loss – confide that there may be a way to speak with Ollie. To allow mother and son the gift of a final goodbye.

Writer/director Roberts worked closely with Splat Pack member Alexandre Aja, the film’s producer, to capitalise on the unique opportunities of the evocative Mumbai setting and to sharpen the human story. Aja in turn brought in longtime collaborators Maxime Alexandre and Baxter as cinematographer and editor and together the team have choreographed an hypnotic danse macabre which shudders with disquiet and squeal-aloud jumps.

Critical to the success of eerie events on The Other Side of the Door are the horrors that come before. Roberts and co-writer Ernest Riera pull no punches when they kill Oliver. He dies in a profoundly upsetting scene which immediately bonds us to Maria. They then have the grieving mother exhume the boy and it is only the curious rules of the genre – bloody strife before afterlife – that prevent this from being unforgivably ghoulish.

Callies brutally delivers the punches of the feature’s early melodrama and sells its transition to more familiar J-horror territory equally well. Jeremy Sisto is necessarily absent or oblivious for the bulk of the action but gives competent if unremarkable support. He is surplus to requirement though, as a quartet of (ostensibly) female characters first tearfully bring Olly back from the great beyond then determine to return him to sender.

Despite a final chapter which tends towards the pedestrian, The Other Side of the Door is a superior supernatural thriller. The incorporation of Aghori rituals, Western ignorance/naïveté and Hindu reverence for the journey from life to death lend a refreshing twist to a potentially tired tale. Roberts’ vision and Aja’s experienced eye introduce beauty into darkness and conjure heart-skipping scares from broad daylight.

A deadly storm brings monstrous predators in trailer for ‘Crawl’