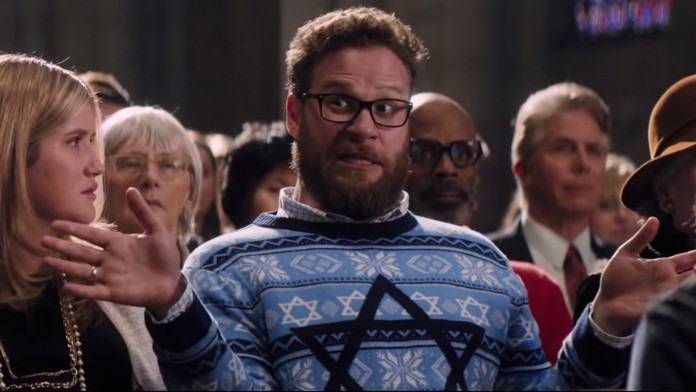 Christmas is all about spending time indulging in the things you most enjoy. It’s a time of giving, sure, but it’s also a time to treat yourself. We’re led to believe it’s all about family, sitting down at Grandma’s house, eating copious amounts of Quality Street and feigning interest in Doctor Who for the sake of a happy household. But Jonathan Levine’s stoner-Christmas-comedy The Night Before offers a somewhat more realistic take, appealing to those who enjoy going out with friends, and playing Goldeneye on the N64 at your mum’s house. If that’s how you like to spend your holidays, then this movie may just be for you.

Set across one, fateful Christmas Eve, we meet best friends Ethan (Joseph Gordon-Levitt), Isaac (Seth Rogen) and Chris (Anthony Mackie) who made a pact to spend this very day together every year, to provide company for Ethan during the festive period, following the untimely death of his parents. For years they’ve wanted to obtain tickets to an elusive, grandiose event called ‘The Nutcracker Ball’ and when they finally get their hands on tickets, they set off for what should be the memorable of nights – and with Isaac expecting his first child, they’ve also agreed for it to be their last undertaking of this particular ritual. Before they get started, they decide to make a quick visit to local dealer Mr. Green (Michael Shannon), while Ethan attempts to formulate a plan to win back his ex-girlfriend Diana (Lizzy Caplan).

Though littered with moments that will have you chuckling like Santa after one glass too many of mulled wine, The Night Before still represents a lack of originality, as your archetypal, Seth Rogen stoner comedy that feels interchangeable with the majority of his preceding endeavours. This appears as your typical disaster movie that stringently adheres to the beats of the genre, reluctant to attempt anything unique. It’s all about the superfluous cameos and the hilariously spontaneous madcap incidents our protagonist stumble in to – much like Superbad, or The Sitter, We’re the Millers, etc.

It’s a shame because there is a profundity attached to this title, but it bubbles under the surface throughout and never becomes the prevalent theme. It’s the notion of growing older, and growing apart. We work our way, quite literally, around the streets of Brooklyn before finally getting to the point of the narrative, where we study what it means to these three friends that their lives have all progressed, and they’ve drifted apart from one another. That’s the crux of this tale and the emotional core – so it’s a shame we deviate away from it throughout in search of a cheap gag. That’s not to suggest irreverent comedies of this nature should be bogged down by poignancy and pathos, but the film is vying to achieve that in parts, and it’s the balance between the more profound elements with the absurd that are to the picture’s detriment. Screenwriter Evan Goldberg revelled predominantly in the latter in This is the End, while director Levine thrived in the former in 50/50 – and in this production they try to combine both – but having your Christmas pudding and eating it springs to mind.

Nonetheless, Rogen is brilliant, and after a cocktail of drugs he turns in one of the funniest screen performances of the year, while Mackie gives an accomplished turn too, with yet another festive endeavour for the actor, following an insignificant role in Christmas with the Coopers. But this is the festive feature you’d be better off indulging in this year, and in spite of the film’s flaws – of which there are many – they aren’t taking any of this seriously, so why should we?