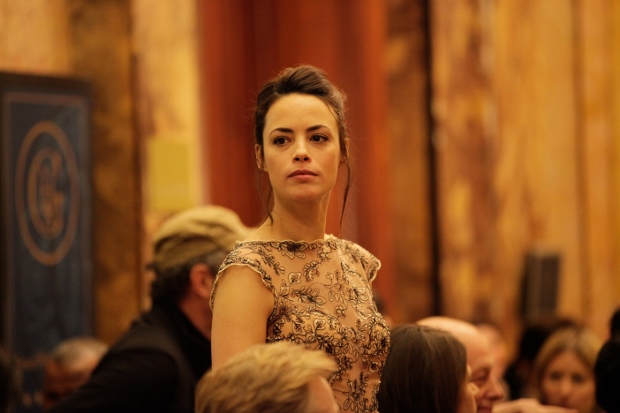 It doesn’t take long for Simon (Yvan Attal), a straight-out-of prison, middle-aged thief, to agree to another burglary. This time around, his friend Albert (Jean-François Stévenin) and their associates plan to steal an ancient 137 carat diamond Florentine at its long-awaited auction. Part of their clever strategy is to befriend the auctioneer, Julia (Bérénice Bejo), who inherits the business after the mysterious death of her mother, that we see in the first scene of the film.

When Julia informs her colleagues about her intentions to take over the role of her well-respected mother, she is met with distrust and suspicion. Being the only young female at the table, Julia is clearly the outsider. As she struggles to deal with her mother’s death and having to prove herself worthy at her job, Simon comes into picture. The self-proclaimed ‘lonely’ man, who, in the beginning of the film, envies the happiness of an old couple at a café, predictably wins over Julia’s heart. As Simon is trying to attain her trust by pretending to be her mother’s trusted employee and friend, the two start having an affair. But the plot only thickens from hereon, as it seems that there are others desperate to get their hands on the diamond – and are willing to betray and kill for it.

Where the first act resembles a crime-induced, foreseeable rom-com, the second is considerably more interesting and action-packed. It digs straight into subjects like honour and pride amongst thieves, love, fear and greed that steer the habits and impulses of human beings. However, the finale is like a rotten cherry on top of a yummy cake: it ruins the whole film. After a roller coaster of emotions and action that was the second part, the cheesy and unnecessary ending is tremendously unfulfilling.

On a brighter note, Attal makes a great gangster, typical, but likeable. Bejo’s character, on the other hand, becomes weaker and weaker as Julia stays out of the way while the men handle their brutal affairs – to a point where she completely gives up her independence for the charming, charismatic thief.

Overall, director Eric Barbier succeeds in making something more than the usual Hollywood burglary action: The Last Diamond pleasantly stands out due to its wit, depth, and a twisted plot. However, the romance, and especially the ending, seem to have been a compromise in attempt to make the film more accessible for the mainstream audience.

It has taken the film two years to get its UK release, and it is worth the cinema ticket: the film has a high entertainment value, good cinematography, and it is admirably well-paced. Nevertheless, the film is a one-time watch; it lacks the little extra to elevate it to the top of its genre. In addition, the absence of a clear comical element, however promising in the beginning of the film, makes it no more than a mediocre fraud drama.