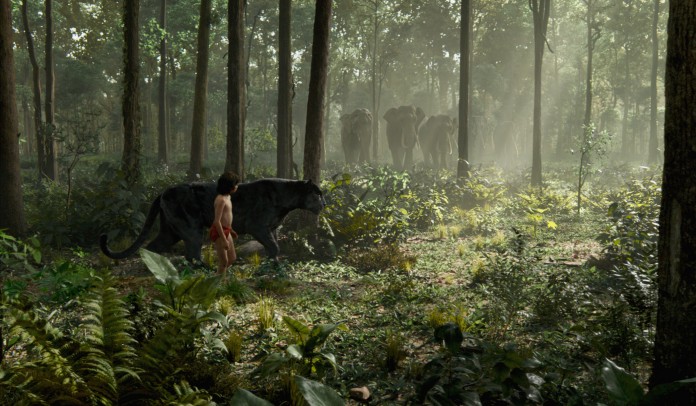 Disney’s Jungle Book is already a family favourite. The charming 1967 animation is full of larger-than-life characters and unforgettable musical numbers.

Tasked with bringing the story to the big screen once more, Jon Favreau has decided to make a live-action version of the Rudyard Kipling novel. Its not the only adaptation on the horizon, Warner Bros. are developing their own version, but its this one that arrives first.

With less than two months to go, we were lucky enough to catch an exclusive presentation of never-before-scene footage with the director and special effects team on hand to talk us through it.

Here are some of the highlights.

The presentation took place at production house MPC in central London. Favreau mentioned that unlike his earlier films like Iron Man, he wanted this one to be predominantly developed by one special effects unit.

Before showing us the footage, Favreau explained what his version of The Jungle Book was all about and why he decided to take on the remake in the first place.

It’s kind of fun in that tradition, to introduce this very, very old story. And when I say old, I just mean the ’67 animated film but… but also the Kipling stories that… that he drew from and took some liberties with. We tried to investigate the roots of the stories and some of those myths go way beyond Kipling as well. The feral boy raised by wolves, and try to infuse some of that into, and also incorporate a lot of the stuff that I grew up and remember from the Disney movie and how do you combine those things and present it in a tone that feels complete and correct to both.

The real question is why do a movie like this? ‘Cause the first one is very beloved to… to many people and there were other versions of the film. And when I sat in a room with Disney and this was a real pet project of Alan Horne, who… who runs the studio and he felt that this it was a moment to do this film.

They’re doing a lot of Disney properties as live action films; a lot of old animated films. And I didn’t necessarily understand why this was the time or what to do with it. With what he had seen with films like Life of Pi and what had been done with Avatar and these world building films where you could use digital technology to create something really special and different, they saw it as an opportunity, if they really made a commitment to do it, not just to do it as a movie where you shoot some of it and you add some visual effects in, like you would do traditionally with a big feature like this, but to actually build a whole world out.

That was interesting to me, ’cause I was a real fan of Avatar and I’ve gone on to work, a lot of people you’re gonna meet today have worked on that film.

Avatar was mentioned a lot by Favreau during the footage and talk afterwards. It seems to be the real starting point in terms of building the world he wanted for the film.

Another recent blockbuster was used as a reference throughout. Jon spoke of how the 3D and special effects of Gravity were important to the development here, and in particular how the use of computer images were so well done that they were impossible to spot.

The magic trick really worked for on Gravity, ’cause I didn’t know where the CG began and the people ended, but I knew there were real people in there. And so, by doing that shell game with our Mowgli character who’s the only live action dude in it. I mean, there’s some other stuff and flashback, but the main character is a real character, and have a real kid interact in a real way with fake characters. And … and so the challenge wasn’t to make this look real, the challenge was to make it all fit together. And even, when you look at like a CG movie, or animated film that looks photo real, put a real thing in it, it goes away really quickly.

He’s a wonderful … wonderful man. I met him on Iron Man 3 and I asked him at a party a couple of years ago, would you like to play Bagheera, he said, sure. And then, I don’t think he thought I was… I don’t think he even knew what I was talking about. But I got him. And, er, held him to his word.

A lot of the clips we saw have been included in subsequent trailers, but some of the footage extended beyond those images. We learnt about the set up for the film and also got arguably the most spine-tingling introductions to some of the other actors involved.

Idris Elba plays Shere Khan. How do you… put… infuse that personality into a photo real animal like Shere Khan? And how do you get the performance to carry through? And most of the performance here is key frame, er, so it’s done by animators. So the animators on the one hand are studying real animal movement, as they did with… in the times of Bambi they would actually bring animals in. Well, now thanks to the Internet, we have access to footage of the animal behaviour. And so we would pick out what types of behaviours the animals would do. The animators would look at that, they would look at… we would have Idris perform it and use, er, video reference and we would take either video reference, or sometimes, we actually used motion capture reference for a performance.

And then the animators would get all that information and then work it out into the performance of the animal. If you just did motion capture and put it on a tiger, it would be very weird, ’cause, er, tigers don’t emote the same way humans do.

I want to say something about the 3D. When Avatar was done, it was captured using the pay system, in 3D native and then all of the effects were done, of course, in 3D. And so you got this really immersive experience. And then there were a lot of films that converted and… they’re not always converted well. Conversion, sometimes can be very effective and sometimes it’s rushed. And 3D starts to, when it’s not perfect, it starts to get a little, for me, it gets a little… it’s not exactly a plus, let’s put it that way.

In this film you’re getting a sense, we captured, using; we pulled a lot of the technology out of mothballs that hasn’t been used since Avatar. We captured it, native in 3D. So, when you see the kid’s hairs on his face, you’ll start to see that it’s… it’s very intuitively shaped and… and then of course, the environments are built in 3D and so, hopefully, this, you know, this is the type of movie and I’m so glad we’re able to show it in 3D.

Arguably the most important character is that of Mowgli, the feral child brought up in the wild by the animals. Neil Sethi plays the pivotal role in the movie.

We found [our Mowgli] after searching. He’s literally the 200th kid we read. ‘Cause when you’re dealing with a ten year old, they don’t have a big body of work, generally. Er, he’s a… a kid from, all places, Manhattan, er, and he really seemed to capture the personality of Mowgli from the film. And most importantly, I just loved watching him and when you have a kid on screen that much, you want somebody who… kids so often, when they’re on screen, they wear out their welcome, for me.

I got… I got three of mine and so there’s something really kind of charming and so it’s nice to show you some of this footage, and you’ll see how it ties in with the performances, you see Ben Kingsley’s character here as well.

We also caught a glimpse of lovable Baloo, who is played by Bill Murray. It’s unmistakably him and likewise Christopher Walken as King Louie.

We were faced with another thing, which was a bit of a conundrum at first was this character that most people remember, King Louie. There are no orang-utans in India, doesn’t exist. And we didn’t wanna blow the photo realism or the underlying commitment we had, to presenting, er, not just the source material properly, but the environment properly.

You know, we filmed all of it in down-town LA and there weren’t any sets, most of the sets were half the size of this room. Everything else was being built and it was all being built from scouts that were done through India and trying to be accurate to it, though non-specific in certain ways as Kipling was a bit non-specific at times.

Some liberties had been taken and certainly in the animated film a lot more. And we felt that we couldn’t eliminate this character, ’cause it was Disney, you know, it’s part of what I remember from the Disney version of it. And so in our research we found that there was … a creature called the Gigantapithacus, some bones have been found; they existed in this part of the world.

The closest modern day relation to its DNA is the orang-utan, but it was much bigger. It was almost like a bigger version of a yeti from that part of the world. And nobody, of course, has photographs of it; they’ve just found bones and remains. And so, our imagination started to… to run away with us and so we started to figure, what would this creature look like? And how could you use what we know and how could you use the old movie?

But of course, that movie was bit scary, but a bit goofy too, and we wanted to make it fit within our reality. And then the idea of casting Christopher Walken came in. Then my mind started to go.

There was something quite startling, in the very best possible way, about the use of the voices in the footage we saw. It was also quite a brilliant way in which the most iconic theme from the original film was used.

It looks like Disney, and Jon Favreau, have another big hit on their hands.

Disney’s The Jungle Book will be released in cinemas in April 2016.