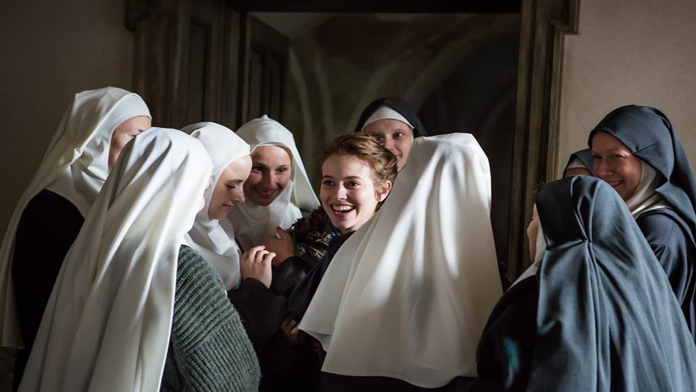 Few filmmakers move so effortlessly between genres quite like Anne Fontaine, and while her most recognised endeavour came in the form of biopic Coco Before Chanel, her most recent production was the enchanting, comedically inclined Gemma Bovery. Now the eclectic director returns in rather contrasting fashion, with the tonally bleak, slow-burning drama The Innocents; a challenging, uncompromising watch.

Set amidst the horrors of the Second World War, Lou de Laage plays Mathilde Beaulieu, an intern working with the French Red Cross alongside doctor, and friend, Samuel (Vincent Macaigne). Though fully committed to the task of treating and repatriating French soldiers, she finds herself distracted by a Polish nun who turns up to the hospital, desperately seeking help. Obliging, Mathilde travels to the convent only to be shocked by the hidden, pregnancy epidemic, whereby several of the nuns are in the latter stages of their gestation, and Mathilde is eager to lend a hand, in spite of the Russian soldiers keeping a close eye on proceedings.

There’s an inevitable, and overriding suspense that exists within this production, deriving from the fact our protagonist shouldn’t be at the convent, and the Russians are monitoring, enriching the narrative and making for a film persistently spiked with a distinctive intensity, that so often lingers in films set during this particular era. What also helps matters is the sheer complexity and nuance of each and every character – with no supporting role wasted, which is a sign of an accomplished screenplay. de Laage excels in the leading role, empathetic, and vitally vulnerable, and yet you invest in her as a saviour of sorts, albeit a flawed, human one.

The Innocents is far from an enjoyable watch, and a sense of claustrophobia lingers menacingly, becoming tedious as we progress, as a sense of repetition takes its toll – but not in a way that is detrimental to the overall project, instead immersive in its execution, placing the viewer in this environment where the women feel suffocated, trapped and afraid. We adopt that perspective, and what transpires is a film that is far from an entertaining cinematic experience, but undoubtedly a rewarding one.

The Banshees of Inisherin Review