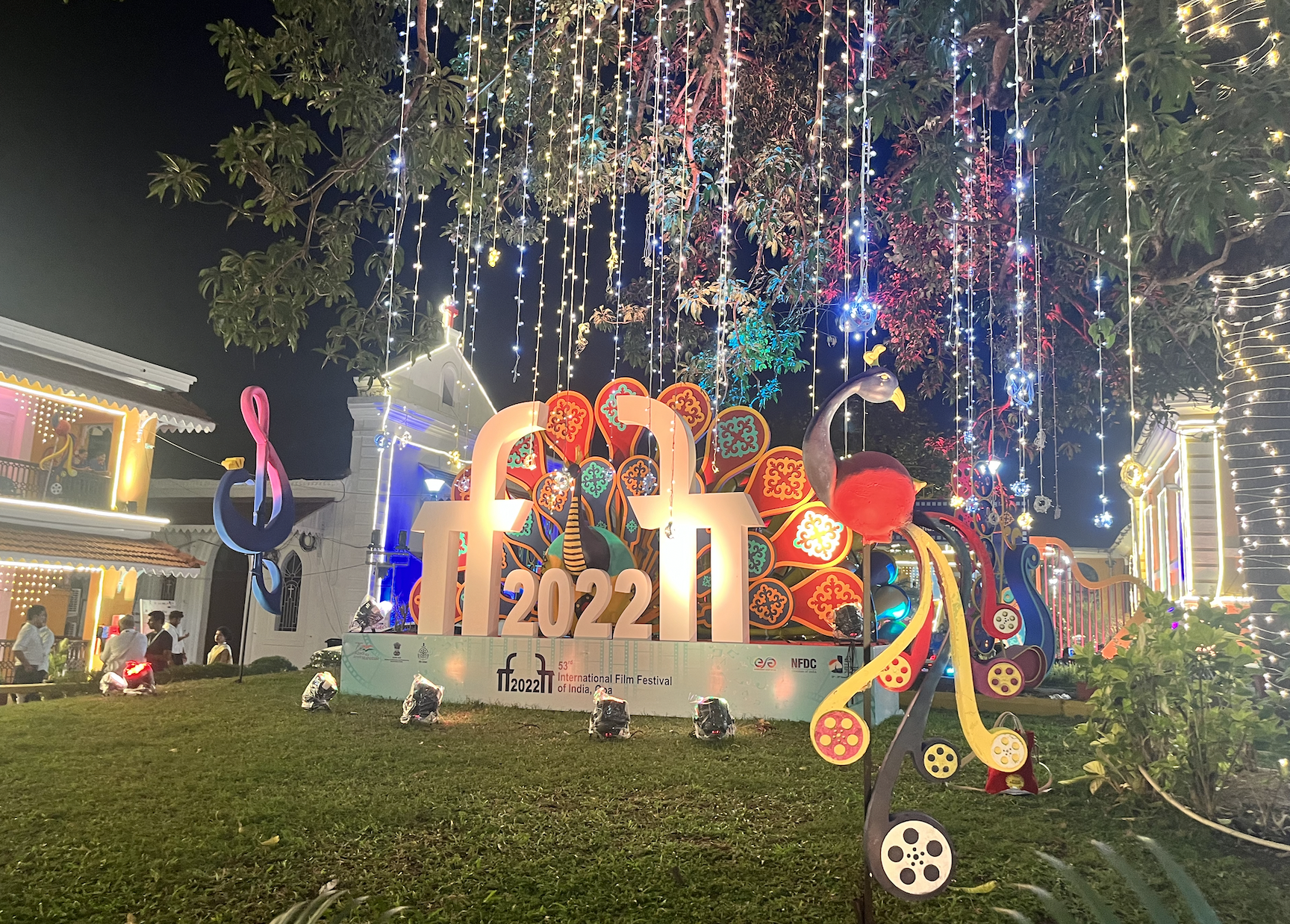 As the UK readies itself for a bitterly cold winter, we had the immense pleasure of being whisked away to the sub-continent, as a guest as the annual International Film of Festival of India (IFFI, for short) to spend a week indulging and celebrating cinema that this film-crazy nation has to offer.

The 53rd edition, which took place in Goa, ran between the 20th to the 28th of November, and had an eclectic array of films, spotlighting Indian productions and filmmakers, as well a films from around the world, with a focus on French cinema, and Israeli content in particular – and what transpired was an impressive and compelling programme.

During our visit during the latter half of the festival, we saw a couple of contemporary productions, kicking things off with the visually striking period drama Qala, a Netflix production which has made its way to the streaming platform just this week. It’s an intimate character study of a musician (played by Triptii Dimri), which while suffering from melodramatic tendencies at times, comes to life as a beautifully shot and arranged production that certainly looks the part up on the big screen.

The following evening we attended the gala screening of Tera Kya Hoga Lovely, a romantic comedy that while irreverent at times, focuses in on India’s “obsession with fair skin”. Starring superstar Randeep Hooda, who was also in attendance at the festival (sat about two rows behind us at the screening, in fact) it’s a fun-film that does struggle narratively at times, but has a vibrancy that is rather appealing.

We followed up this experience by deciding to step back in time, to help contextualise modern Bollywood films, and to help place them in the cannon of this nation’s fine cinematic history, so we went to see a classic. Given the venerable actress Asha Parekh had been awarded the prestigious Dada Saheb Phalke prize – one of the highest film honours in India, IFFI put on a retrospective to celebrate the octogenarian’s wondrous career. We opted to see Kati Patang, give it’s the role that earnt Parekh her one and only FilmFare award for Best Actress, and what a great decision we made, as we became completely beguiled by this beautiful piece of cinema, relishing every minute of watching such a classic Indian film… in India.

The film presented plenty of gala screenings that really showcases what the film industry in India is currently producing. From The Storyteller to Bhediya, there was an array of Hindi-language features that were capturing the imagination of audiences. The latter featuring megastar Varun Dhawan, and going down a storm as a fast-paced werewolf-movie full to the brim with twists and turns.

This present moment in time feels like a great time to become accustomed to the cinema of India, and get to know some of the stars – from in front of and behind the lens – given the accessibility of modern-day film watching. A few years ago if you wanted to see a Bollywood release in London there were only a handful of cinemas dedicated to showing films from the region, and these titles were easily missed. But with streaming sites bringing these films into viewer’s living rooms, with that comes a rise in global popularity.

This year we’ve seen Gangubai Kathiawadi, by Sanjay Leela Bhansali, featuring a terrific central performance by Alia Bhatt, and of course the sensation that is RRR (which screened at this year’s IFFI, even if it’s likely every single person would’ve seen it already!) The latter film has been such a ginormous success, standing as India’s highest-grossing film of all time, and appealing to viewers from all over, trending on Netflix globally for 14 consecutive weeks (!!!), meaning there’s a deserved spring in the step of producers and filmmakers, and that excitement rippled throughout IFFI, you could sense the feeling of an industry going through a promising time – making this present moment a great time for us to have visited Goa and see what’s on offer.

Naturally, of course, given this is an international film festival, it wasn’t just the local cinema that illuminated the screen, with an impressive line-up of films, many of which have been impressing audiences and critics alike across the festival season. We finally saw Lukas Dhont’s Close for the first time, and weeped uncontrollably for large portions of the film. If you ever wanted an example of cinema uniting us all, connecting us through human emotions and storytelling, then the fact you could hear sniffling and sobbing in this room is emblematic of that fact.

Also on show were Mia Hansen-Love’s One Fine Morning, and Jafar Panahi’s No Bears, and even Park Chan-wook’s Decision to Leave. The winner of this year’s Golden Bear award in Berlin, Alcarras also showed to audiences, while other notable features such as Aftersun, Triangle of Sadness, Pinocchio and The Whale, all screened for audiences. Palme d’Or nominees such as Holy Spider and Pacificition, to name just a couple other highlights form this expansive programme.

There were plenty of classics for audiences to enjoy too, with fun, entertaining films such as Ghostbusters playing, while other classics like Kubrick’s 2001: A Spacy Odyssey and Five Easy Pieces as well as The Last Picture Show all played, showing that while we are undoubtedly taking much away from Indian cinema, that favour has very much been returned across the years.

When it came to awards – and a rather dramatic, now-politically charged affair following the head of the jury Nadav Lapid calling out the festival for the inclusion of The Kashmir Files, on the grounds that it’s a distasteful piece of propaganda – when side-stepping the controversy and focusing on the prize-winners, it was Valentina Maurel’s I Have Electric Dreams which took home the top-gong for Best Film as well as Best Actor (Female) for Daniela Marin Navarro. The other two major awards, for Best Director and Best Actor (Male) went in the direction of Persian crime feature No End, as Nader Saeivar and Vahid Mobasheri were rewarded, respectively.

The event rounded off what was a truly magic week in Goa, a liberal, creative part of India that has wonderful galleries, bars and restaurants – and of course one helluva coastline to enjoy. When we weren’t in the cinema watching movies, we could be found sunbathing on the beach, eating local delicacies, and Southern-Indian food such as dosa’s and vada pav, in a place renowned for its delectable vegetarian cuisine. India truly was a great home for international press for a week or two, making us all feel very welcome in their beautiful, vibrant nation, at what was an endearingly chaotic festival we’d be thrilled to attend again one day.