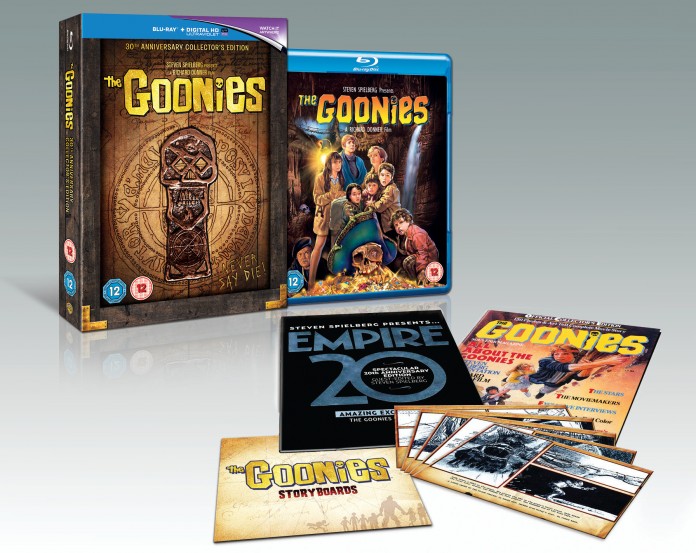 1985, what a year for film! Back to the Future, The Breakfast Club, Rambo 2, Cocoon, Mad Max, Commando, and our favourite of all (along with BTTF!) The Goonies (in fact see our Class of ’85 feature list here)!

A fair few years ago, Jon and I toyed around with ideas for the name of our website and our love of Goonies shone through landing us on the title, HeyUGuys. 30 years has passed since the iconic Steven Spielberg / Richard Donner production hit cinema screens and over the course of that time, all the movies listed above have remained classics in the world of cinema. You can check out our little HeyUGuys celebrity montage below.

Warner Bros. have today revealed the list of bonus features that we’ll find in the 30th Anniversary edition of the Blu-ray boxset and it’s a lovely little haul. Full information can be found below and we’ll be first in line to acquite our copy!

The boxset is released 9th November.

London, UK, October 06, 2015 – Cult classic “The Goonies” is set to make a return with a special 30th Anniversary Edition Blu-ray. From the imagination of three time Academy Award®-winning executive producer Steven Spielberg* and directed by Richard Donner, the special edition Blu-ray of the much-loved adventure will be released on 9th November by Warner Bros. Home Entertainment, including a host of special features and never-before-seen deleted scenes. For die-hard fans, there is also a 30th Anniversary Collector’s Edition, which comes with an array of money-can’t-buy Goonies collector’s merchandise.

“The Goonies” stars Sean Astin, Corey Feldman, Ke Huy Quan, Josh Brolin, Jeff Cohen, Kerri Green and Martha Plimpton as ‘The Goonies,’ a group of children from the Goon Docks area of Astoria, Oregon, who are facing the foreclosure of their homes.

Following a mysterious treasure map into a spectacular underground realm of twisting passages, outrageous booby traps and a long-lost pirate ship full of golden doubloons, the kids race to stay one step ahead of a family of bumbling bad guys… and a mild-mannered monster with a face only a mother could love.

A family adventure classic from start to buccaneering finish, “The Goonies” is a cinematic treasure trove of breathtaking action, dazzling effects and shiver-yer-timbers thrills!