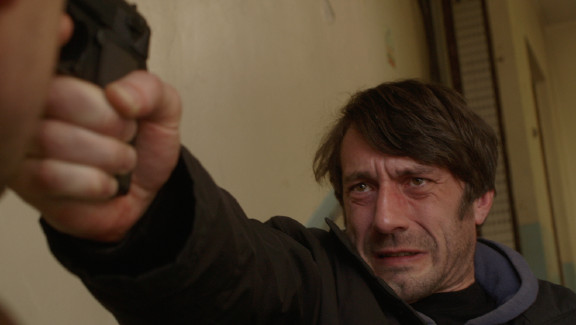 The Ghoul isn’t your run-of-the-mill crime film nor your traditional psychological thriller. In fact Gareth Tunley’s début feature pretty much defies categorisation at every turn. This low-budget oddity is an unique, head-spinning, enigmatic slice of British cinema.

The film focuses on police detective Chris (Tom Meeten) who is called to the scene of a strange double murder at a suburban home. In an attempt to retrieve key psychological records, Chris goes undercover posing as a patient so he can visit the suspect’s psychotherapist. Immediately things take a disorientating turn as our perception of Chris is completely turned on its head and even the most minor details are forced into doubt. As Chris continues to attend therapy sessions, distinctions between what’s fantasy and reality become increasingly difficult.

To say any more would plunge us deep into spoiler territory and wouldn’t give justice to Tunley’s intricate, mind-bending script. The influence of executive-producer and frequent collaborator Ben Wheatley on Tunley’s own style is clearly evident in his genre-bending approach which fuses dreamlike imagery with typical crime motifs and the narrative rug pulls of psychological thrillers.

For the most part, this ambitiously twisty narrative hits the mark, delivering enough in the way of intrigue and atmosphere to keep us embroiled in the film’s guessing game. However, things do get pretty confounding, especially in the final act, and the film’s cryptic structure is likely to alienate less patient filmgoers. Additionally, Tunley chooses to present the film in a disappointingly straight-faced manner. Considering his roots in comedy, it’s a shame that the film is played so seriously when a few streaks of black humour wouldn’t have gone amiss in a largely bleak tale. In spite of this, Meeten puts in a powerful and complex lead performance, illustrating Chris’ duality and escalating instability with aplomb. Alice Lowe also shines as Chris’ friend/love interest and they share several genuinely tender, nuanced moments together.

It’s admirable how much Tunley has achieved on such a limited budget and inside a very tight filming schedule (he had just ten days to shoot the majority of the film). Although the final result is a little unpolished and can be frustratingly ambiguous, Tunley’s auspicious début has shown he’s a director big on ideas, invention and ingenuity – let’s hope he’s given the chance to move onto bigger and better things.