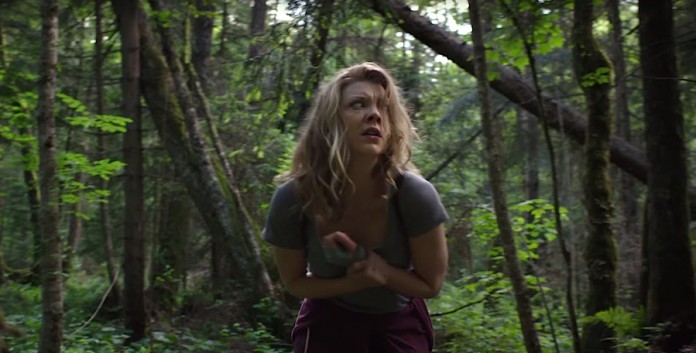 The low-budget horror genre have provided yet another forgettable entry, this time headlined by Game of Thrones favourite Natalie Dormer. Jason Zada’s latest is set in the Aokigahara Forest, in the foothills of Mount Fuji  – which has for centuries been linked with death and despair. There are tales of people going into the region to commit suicide and their spirits remaining behind to encourage others to do likewise.

Sara (Dormer) travels to Japan in a desperate bid to find her twin sister Jess, who has mysteriously disappeared. All signs point to the troubled young teacher going into the forest, but Sara is convinced that her sister is still alive. Before she enters the woodland for herself, despite warnings not to do so, Sara is befriended by journalist and travel writer Aiden (Taylor Kinney). He has a friend who might be able to help, although he himself remains aloof about his motives.

Their local guide warns the pair to not spend the night in the forest, but Sara refuses to leave when she finds Jess’s belongings in her abandoned tent. Haunted by troubling visions, and finding herself falling into a cycle of depression, Sara begins to feel that everyone around her, including Aiden, are out to hurt her. Is it the stories of the past getting to her, or is their something more sinister at play?

Dormer holds the attention well as both Sara and Jess. The characters are kept apart on screen until we get a flashback late in the movie, and as such we have to learn a lot about the missing twin through the performance of the Game of Thrones star. She does this well, and when we see Jess, it is obvious how differently, and yet subtly, Dormer is playing both young women.

The scares in the film, however, are poorly handled. Predictable and reliant on believing the blend of psychological and ‘real’ horrors, the mix doesn’t sit well together. The film needs to decide which way it is going to go early, and whether it will play up the mental torture that drives people to extremes, or create a world where spirits and demons are real. Even by the end of the film we have no idea what we are seeing. One of the characters is written out completely, yet we are meant to surmise that this could all be in the mind of Sara.

There’s an uneasy use of suicide throughout. It is a difficult subject matter to dramatise given how debilitating it can be. It’s never played for laughs but it is used as a shorthand when the script runs out of ideas. Meanwhile the locations, although not actually in Japan, are very well presented. The loneliness and isolation of the forest is spooky, as we get a real sense of pain, although the plot lacks anything that adds to the visuals.

The supporting cast don’t get as much as Dormer does. Kinney begins as an unknown quantity and we know even less about his character by the end of the film. The loose ends aren’t tied up in any way, with the final scenes implying there is more to come. Though to be honest, we really hope there isn’t.